Two more terrain pieces I managed to complete over the Easter weekend. Firstly, a 15mm bridge which I purchased from Baueda: 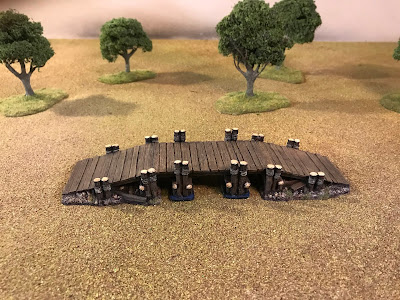 This is a very nice three-part model and includes some nice detail, conveying the impression of a bridge built by an army while on campaign: 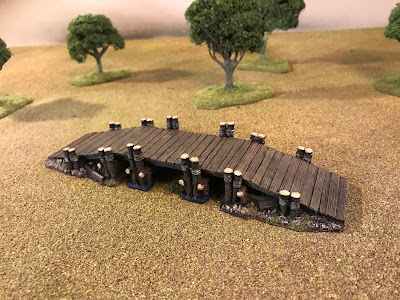 I also purchased the additional expansion section which, when added, turns it into a long bridge which should be enough to cover most scenarios: 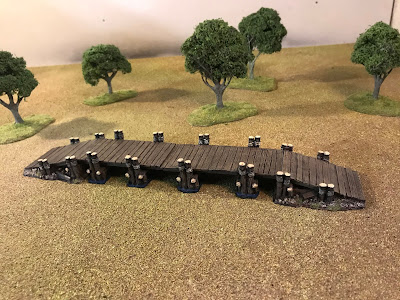 I also completed a ruined temple from Forged in Battle, comprised of a mixture of resin and metal components. Another nice model which I blockcoated in a Foundry sand colour and to which I then applied an ink wash and three successively lighter dry brush applications. As I was doing this the thought crossed my mind that I probably could have just gone down to the local aquarium shop and purchased something from there instead, but I was pleased with the overall result: 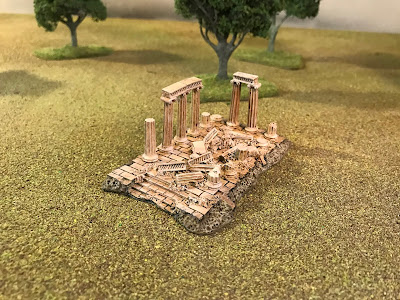 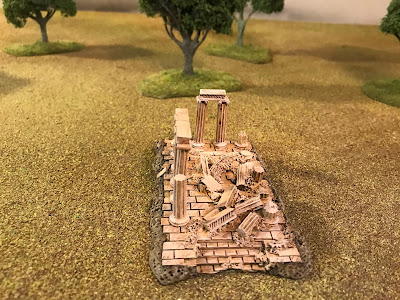 I'll probably end up incorporating this into a larger middle-eastern built-up terrain piece more suitable for use in DBMM. I have a few more Forged in Battle buildings in mind for this and will be making a start on this once I completed a few elements of Spanish cavalry.

Easter proved to be quite productive and I managed to complete forty elements of Spanish caetrati. 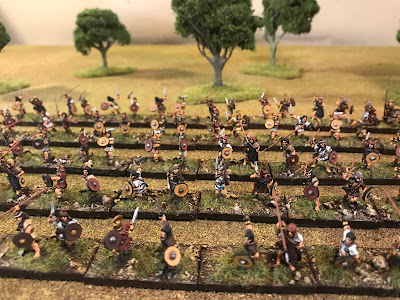 The figures are again Xyston with twelve different poses, so there was a fair amount of variety to get stuck into: 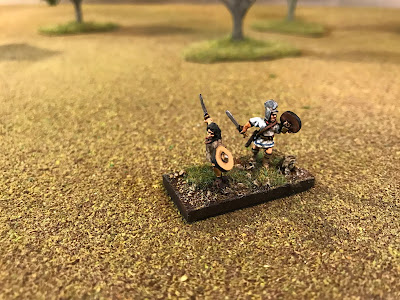 The models are supplied with the typical Spanish caetrati shield, which meant a welcome change from applying transfers: 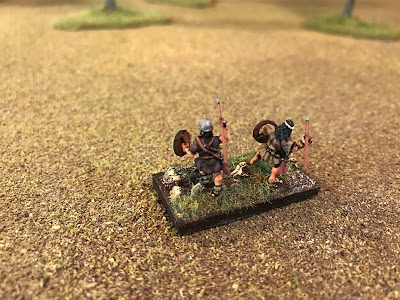 Some of the blade-armed figures were single-sculpts, such as the figure on the left below, so that also meant not having to glue on separate shields or weapons: 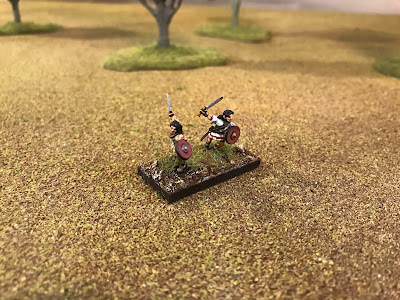 The detail was up to the usual Xyston high standard, which made these a pleasure to paint: 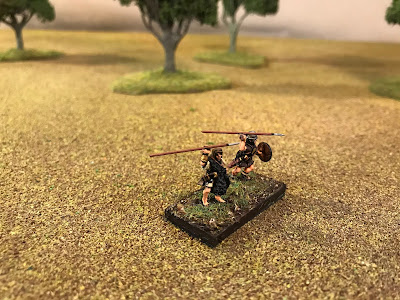 I actually ended up with seventy-nine figures for some unknown reason, but remembered I had a spare scutarii figure so recruited him for the fortieth element: 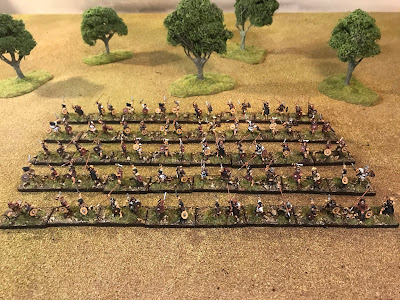 On to some cavalry now, then a few more slingers and a few elements of celtiberian reinforcements. That means the project should be completed within the next couple of months.

I have also been putting some effort to the completion of a few additional terrain pieces along the way, and will hopefully also have a post on that within the next few days.
Posted by Lawrence H at 04:57 14 comments:

While finishing the last of the Xyston Spanish scutarii I thought I'd allow myself a small diversion in painting and assembling the Hovels Celtic village: 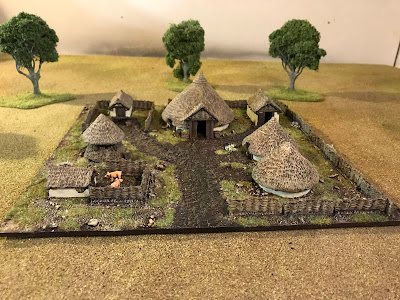 I have always been a fan of Hovels models and have normally ordered them fully painted, so this was the first time I have attempted painting the raw resin myself: 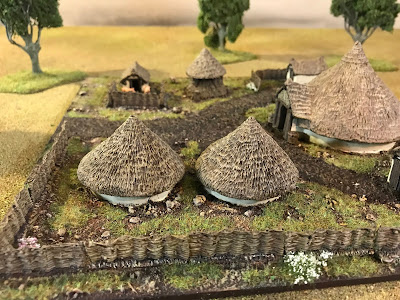 They are lovely models to work with, and the set comes with seven buildings and a couple of pigs for the pig sty: 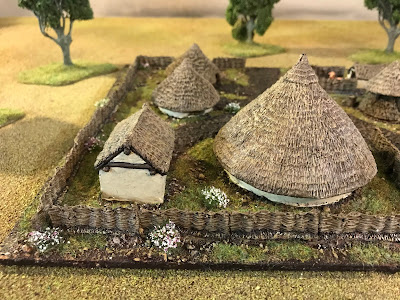 It was also my first attempt using modelling plaster for the mud. I gave it a couple of goes and still couldn't get the consistency completely as I would like it, but as long as it stays in place I think it looks reasonable enough. The fruit baskets are an addition from Baueda, who also make a very nice range of 15mm models and accessories: 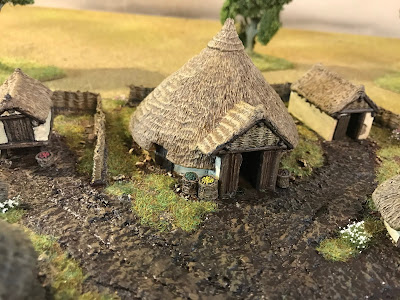 I particularly like the cracked daubing on some of the models which exposes the wattle underneath: 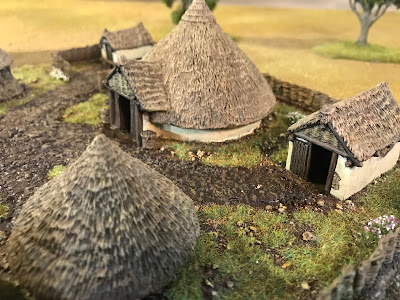 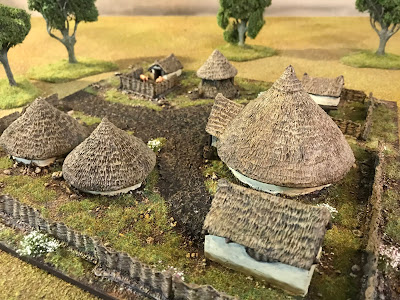 Overall I am quite pleased with the result, and it has encouraged me to get stuck into a few other terrain pieces I have stockpiled and which I now plan on attempting over the coming months.
Posted by Lawrence H at 14:21 10 comments:

Last of the Spanish scutarii

A quick post, as it is primarily more of the same but does however represent the last batch of Spanish scutarii (I promise): 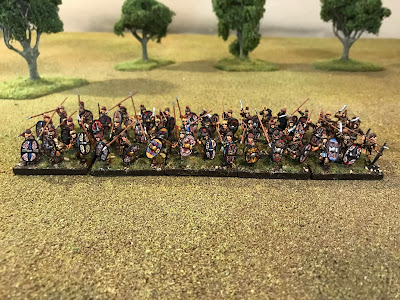 Another fifteen elements, making sixty-seven elements of scutarii in all: 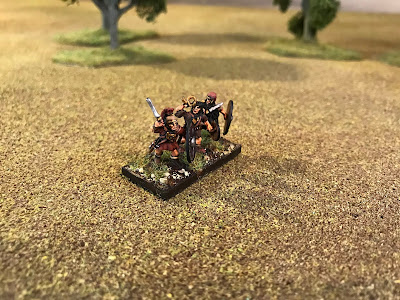 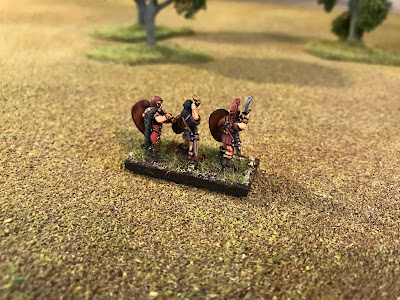 That's 201 figures all-up, and 202 if you count the poor fellow who hasn't found a home yet. Given that the scutarii are the backbone of an Ancient Spanish army I believe I am now on the homeward stretch with this one. As lovely as the sculpts are, I'll be glad if I don't have to see another 15mm scutarii figure again: 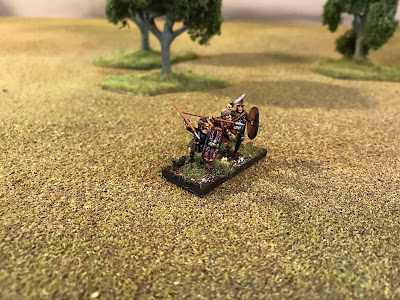 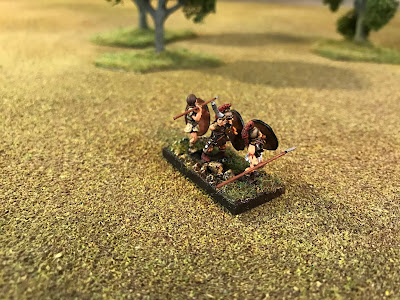 I'm also just putting the finishing touches on a Celtic/Gallic village which I'm hoping will be complete within the next day or so. It's been years since I have had a go at terrain and I have accumulated a rather substantial resin pile to accompany the lead mountain, so I thought I'd make a start on the former to help keep up my motivation with the latter.