Another two battalions completed toward a 28mm Portuguese project, and this time the 2nd Lagos Regiment.

Belonging to the Southern Grand Division, the Lagos regiment's uniforms were therefore piped in red with turnbacks of the same colours, and the second battalion carried a red regimental colour: 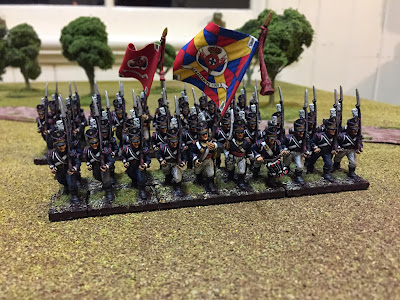 The 2nd Lagos were usually brigaded with the 14th Tavira regiment, both having been raised from the Algarve region of Portugal, and was present at Bussaco, Albuera, Vittoria and the push into Southern France in 1814.

Here is the first battalion carrying the King's colour: 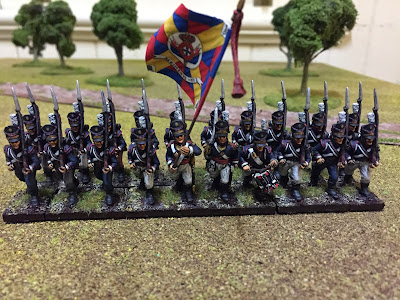 And the second with the regimental flag: 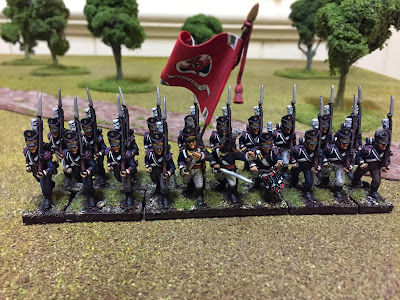 Finally, a quick look at the second from the rear, which is a view I don't believe the French ever saw, and one I hope won't occur too often when this regiment eventually takes to the table: 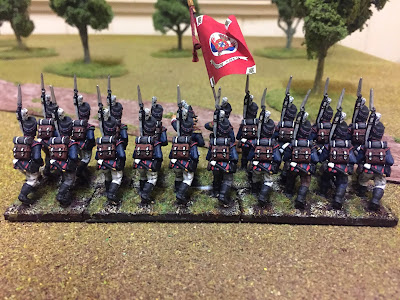 I have just ordered a few more flags from GMB to complete a regiment or two from the Northern Division.

I do have to keep reminding myself to paint in the regimental numbers on these flags which Grahame Black has thoughtfully left blank, the Arabic number generally being the only difference between flags of the same division.


I just wish I could remember to paint them when they are lying flat, rather than after I have attached and curled them around the flag staves...