I was looking forward to the French Hussars as I thought they'd add a splash of colour to my French Army, which is obviously why I chose the brown pelisse of the 2nd and have now followed up with the grey of the 3rd: 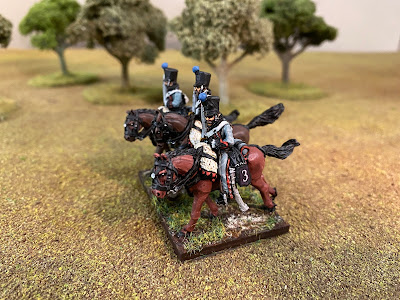 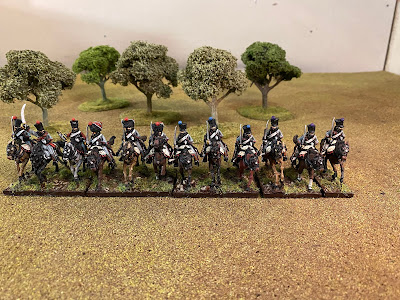 Even the sabretaches of the centre companies is a rather uninspired '3': 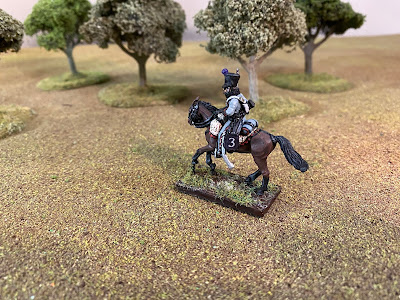 At least the elite company and command sabretaches provide a little more elan: 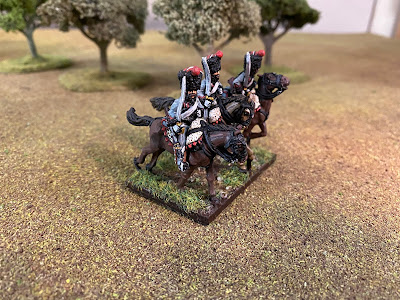 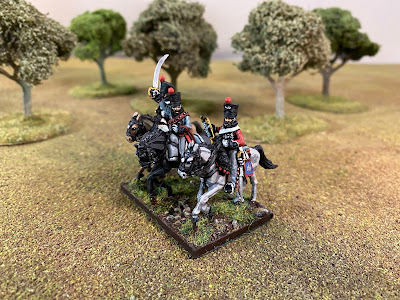 That said, given the prima facie unappealing colour combination, I think the uniform actually works quite well: 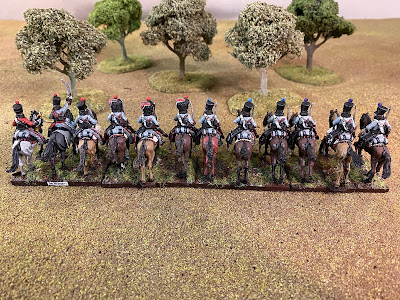 The other thing is, being Perry Miniature Hussars, there was no standard bearer and so no disintegrating flags to deal with. On this subject, I went out and purchased a Japanese-manufactured acid-free paper-glue. Rather amusingly called 'Yamato' glue, it looks like an oversized tube of Wasabi and comes out with the same consistency. Not cheap, but after losing five flags to three different brands of PVA, price was only a secondary consideration. Thinking by now I must surely have the problem resolved, I charged straight in and attached the flag to some French dragoons I have nearly completed, only to wake up the next morning and be greeted with the following: 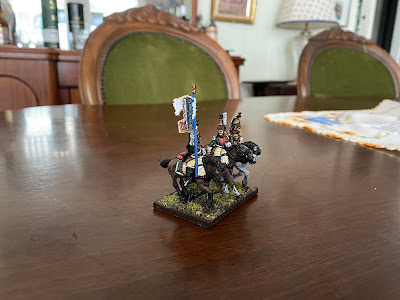 As with the PVA disasters, the unit label printed on standard photocopy paper had also disintegrated: 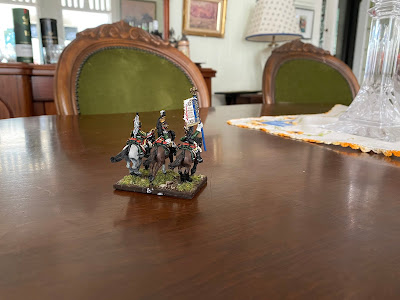 I have been happily gluing flags and standards together for the past ten years, five of them in the same painting area, and the last month is the first time I have ever had this issue. Four different types of paper glue have now been tried, and I'm running out of ideas other than touching up the disintegrated flags and calling it canister damage (although another 24 hours after this photo was taken the flag had all but disappeared). I'm off to the art supply shop to try a fabric white glue next, but will make sure I try it on some off-cuts before I destroy any more flags...

It is nice to have finally finished another regiment toward the Napoleonic French army, this time the 2nd Hussars: 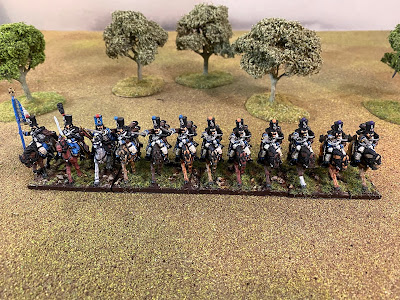 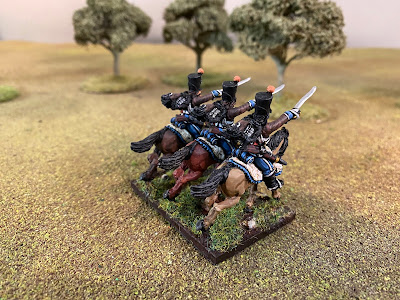 March was a bit of a lost month in terms of completed units. I got near with a few, but suffered a few minor mishaps as the water-based PVA glue I used to put flags on two completed units ended up eating through them. I had never seen anything like it before and didn't believe it could have been the glue having attached dozens of flags before, so replaced them from some spares I had on hand only for the same thing to happen again. I now have several completed units now waiting for fresh flags to arrive, but thankfully the flag on the 2nd Hussars suffered only minor damage and was easily touched up: 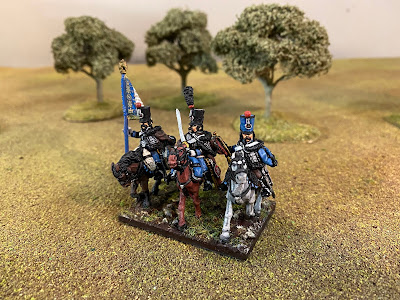 Then there was the shabraque issue. I noticed that Little Big Men Studios sell sabretache decals for Perry Miniature French Hussars and thought that might be a nice touch. I was planning on doing 1st, 2nd and 3rd Hussars and these were all available on one sheet, and was hoping they would be a close enough match for the Perry-sculpted Foundry figures.
Anyway, Steve from LBMS accidentally sent the sheet for 7th, 8th and 9th. He was most apologetic and sent the correct sheet immediately, but that necessitated another three week delay. I laughed somewhat when they arrived as the sabretache designs for the 1st, 2nd and 3rd are among the simplest (the 3rd is basically a white '3' on a black background), and I probably could have had a go at doing them freehand anyway. Still, they are much neater than I could achieve and are not too bad a fit, although they required a bit of trimming and touching up: 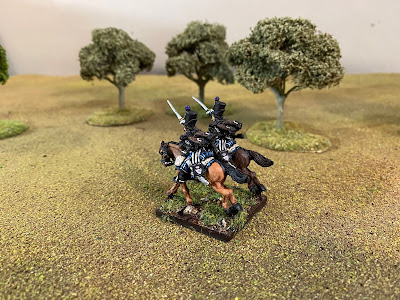 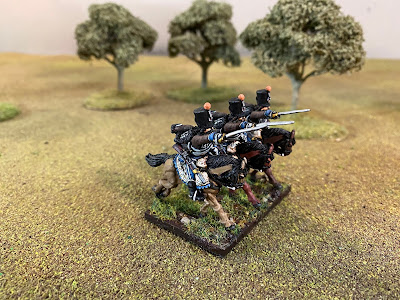 All minor quibbles in the great scheme of things, but it is nice to finally have all the bits I need to complete a unit: 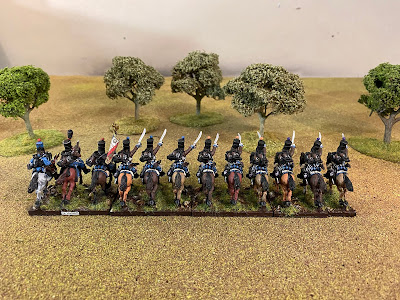 I have been powering ahead with preparation work for another nine regiments while I await the arrival of the replacement flags, so there should be a few more completed units rolling off the production line before too long.
Posted by Lawrence H at 21:25 12 comments: