It is nice to start a new project, even when it is just a larger version of the previous one. I am quite happy to get back to 28mm, but it took me the best part of a week to adjust to picking up the 28mm Front Rank figures which look and feel massive compared to the 15mm Essex Portuguese I have spent the best part of the last eight months painting.

I intend to follow roughly the same track with these, especially as the uniform details are still somewhat fresh in my mind. To this end, I managed to complete the two battalions of the 1st Lippe Regiment over the previous weekend. 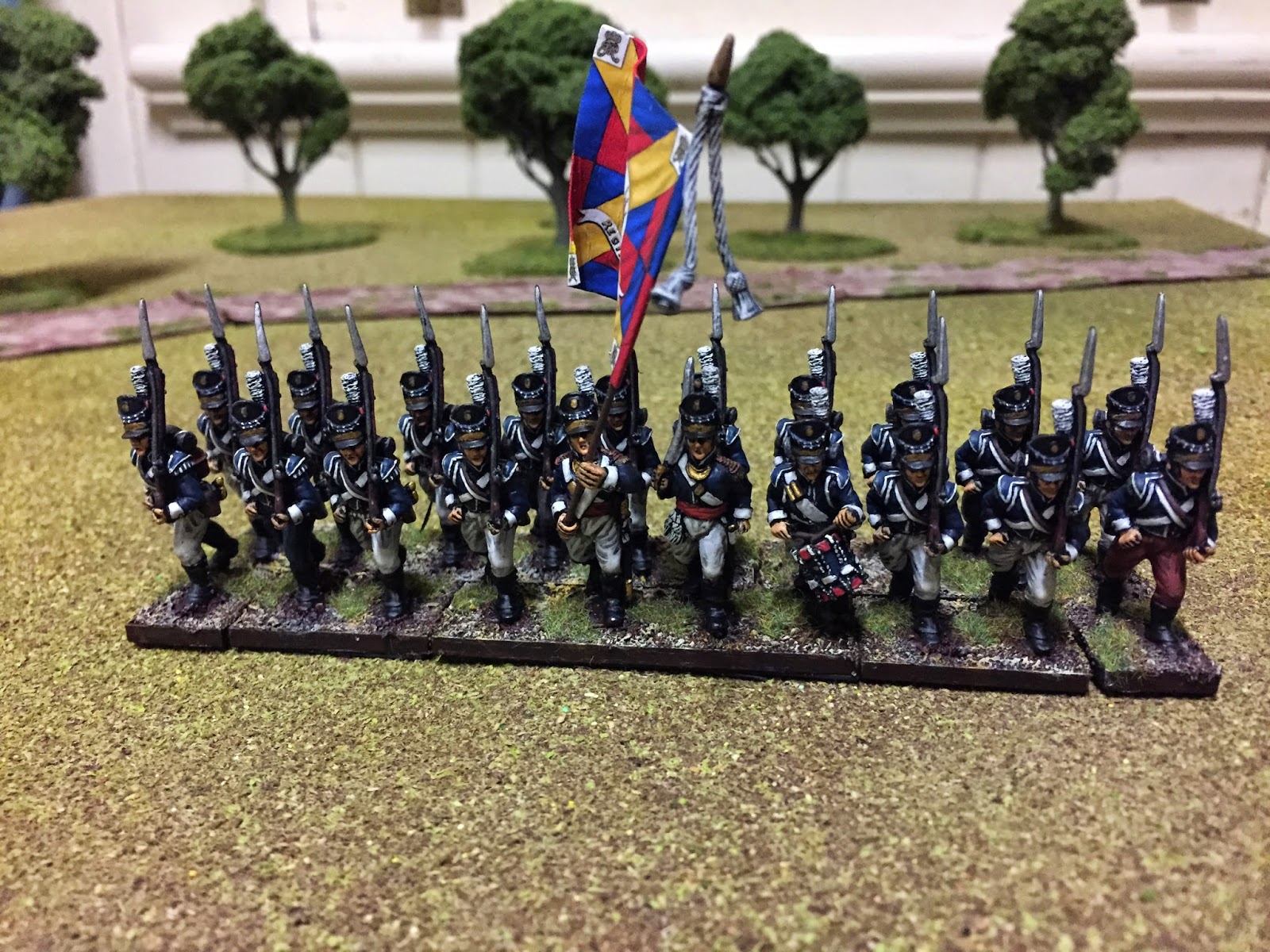 And the second with the Regimental Colour, which is white in this case in line with the regiment's white piping and turnbacks, indicating a unit of the Center Division: 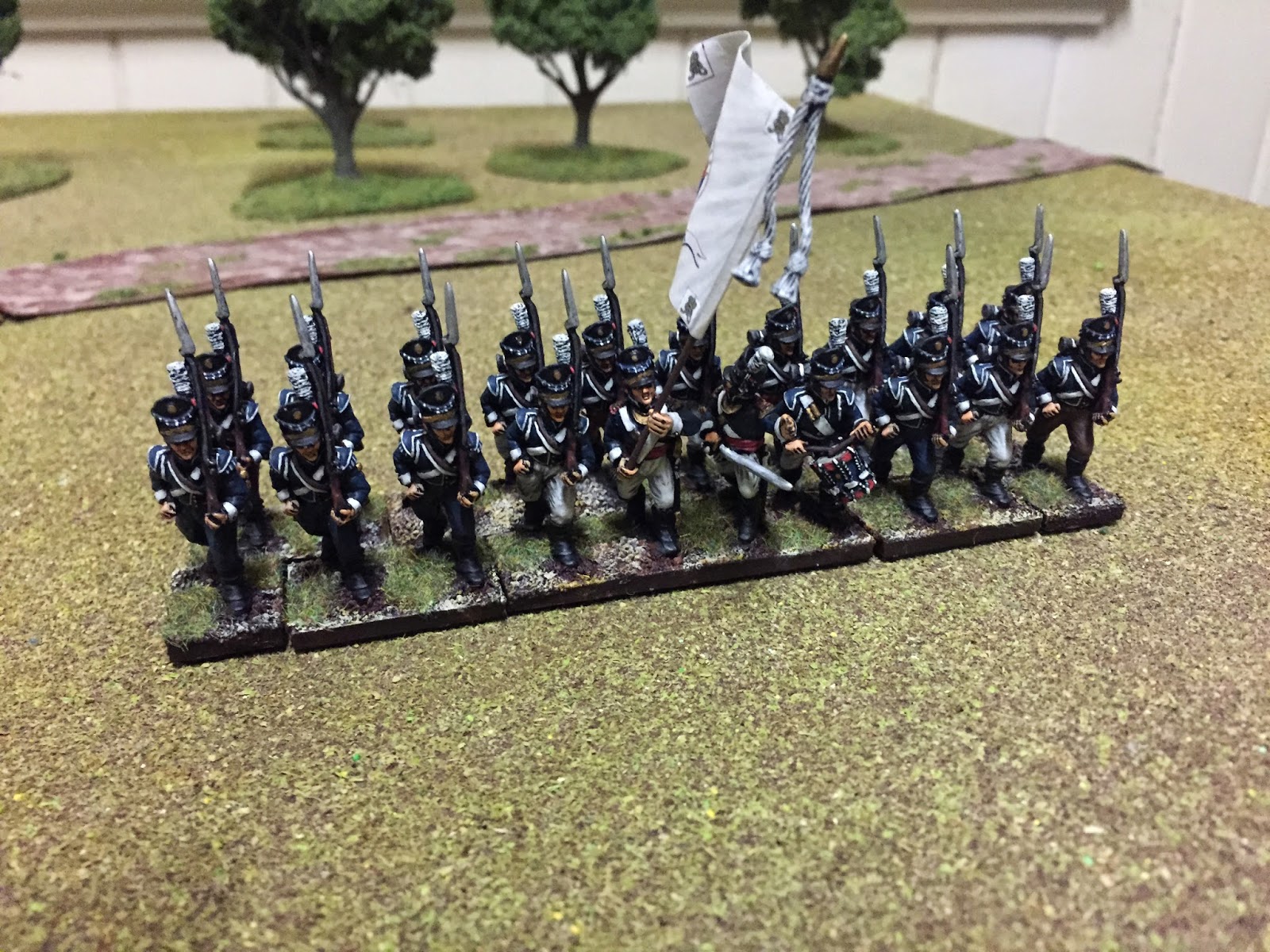 Portuguese flags typically had a brass finial with a cravat or ribbon, but I have used the Front Rank flag staff finial with a tassel and painted it in line with the unit's division. I have seen a few conflicting images, with some suggesting the cravat should be red, white and blue and others that it should be white and blue, but I went with the divisional colour as any other combination would to my mind have looked a bit odd with the rope and tassels. I managed to find a couple of images to substantiate this, so that is good enough for me: 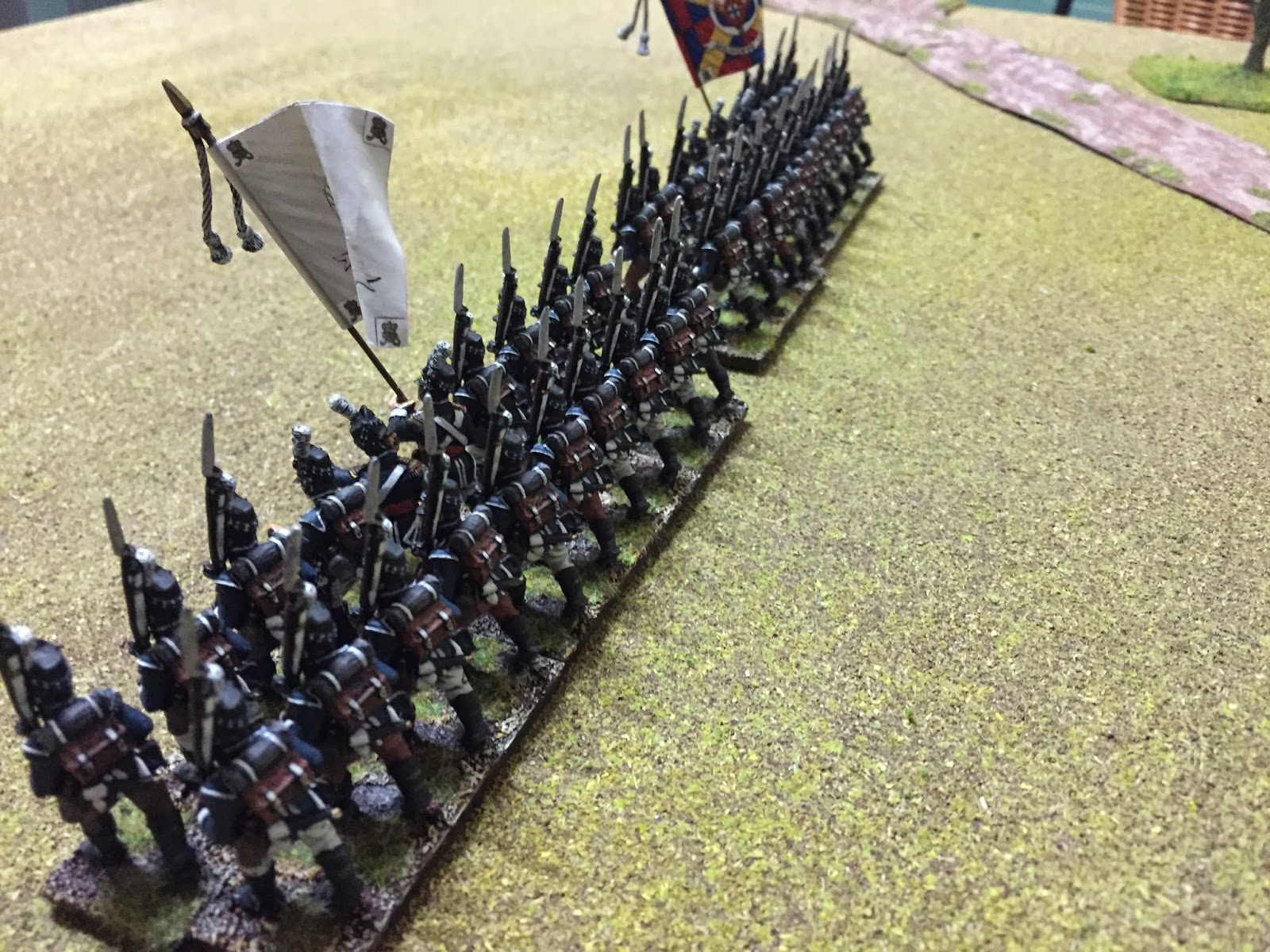 I have done the majority of the figures in the white summer trousers on the basis that this was when most of the campaigning was done but threw in a few, such as the grenadiers below, with the regulation blue issue: 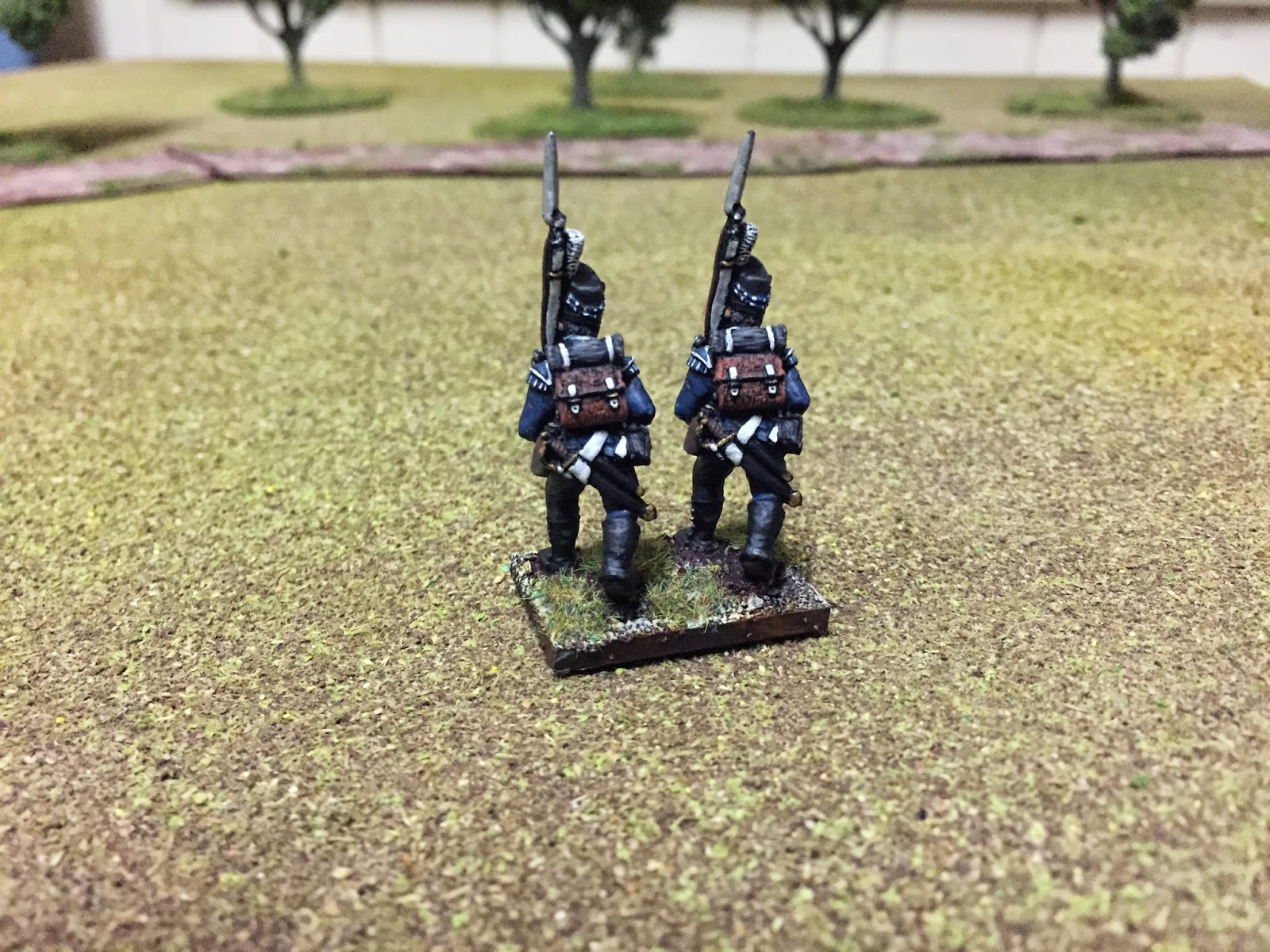 These battalions are possibly overly large given the returns I have read in Oman and the rough 1:30/1:40 ratio I am ostensibly working to, but possibly it is better to paint too many figures and take a few away in any potential future games, rather than not having enough. 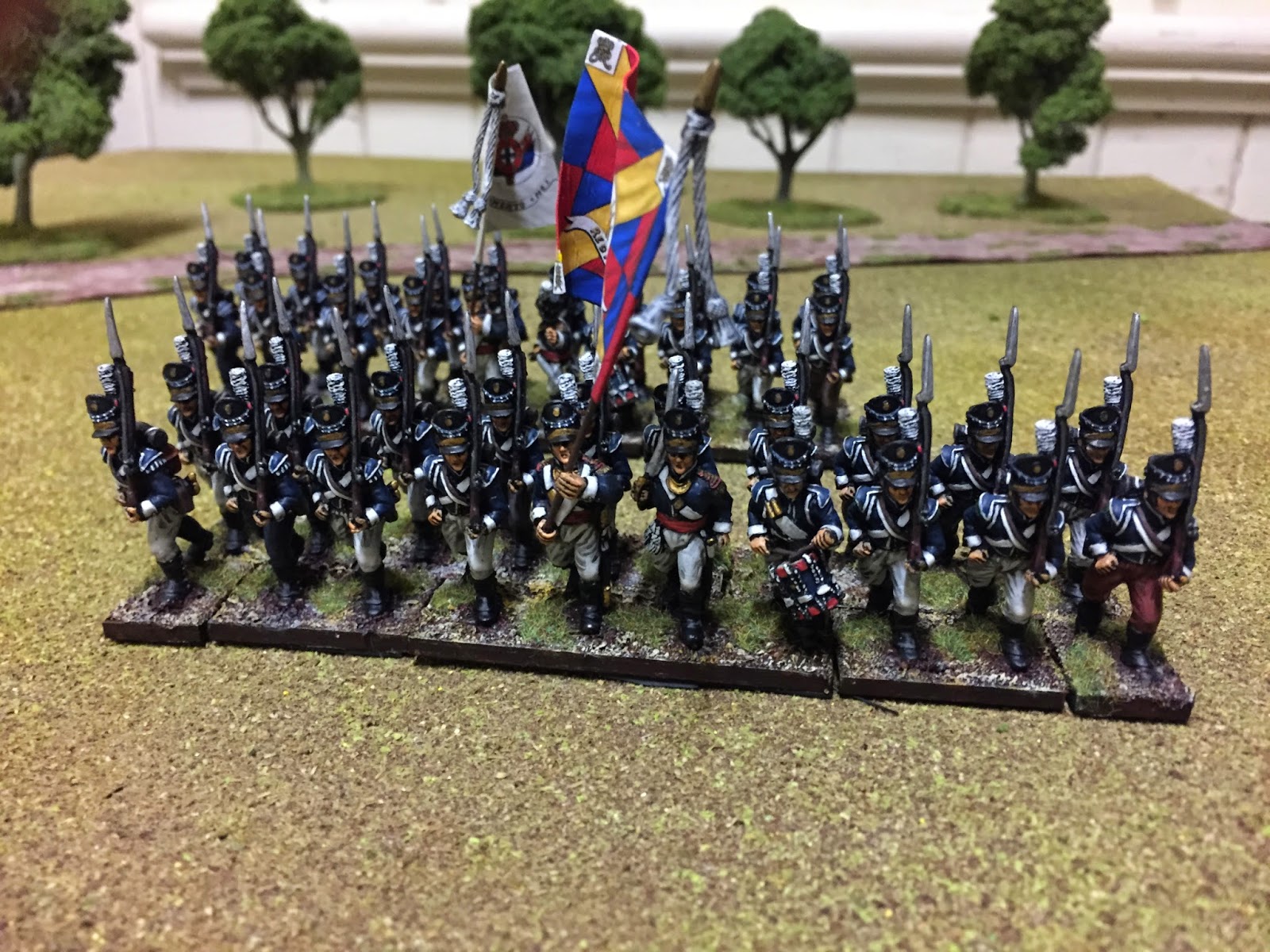 Now on to the 2nd Lagos, with the red piping and turnbacks of the Southern Division which I suspect I will have to again go over twice with two different shades to obtain a visible contrast against the blue jackets.

I find piping the most tedious but at the same time most satisfying aspect of Napoleonic figures, but am definitely not looking forward to the yellow of the Northern Division.

It is always a nice feeling when an army is completed, especially when it has been sitting in boxes for the best part of twelve years in the case of my Essex Miniatures Portuguese. It is probably self-indulgent but I enjoy taking a few parade-ground style pictures before they are packed away: 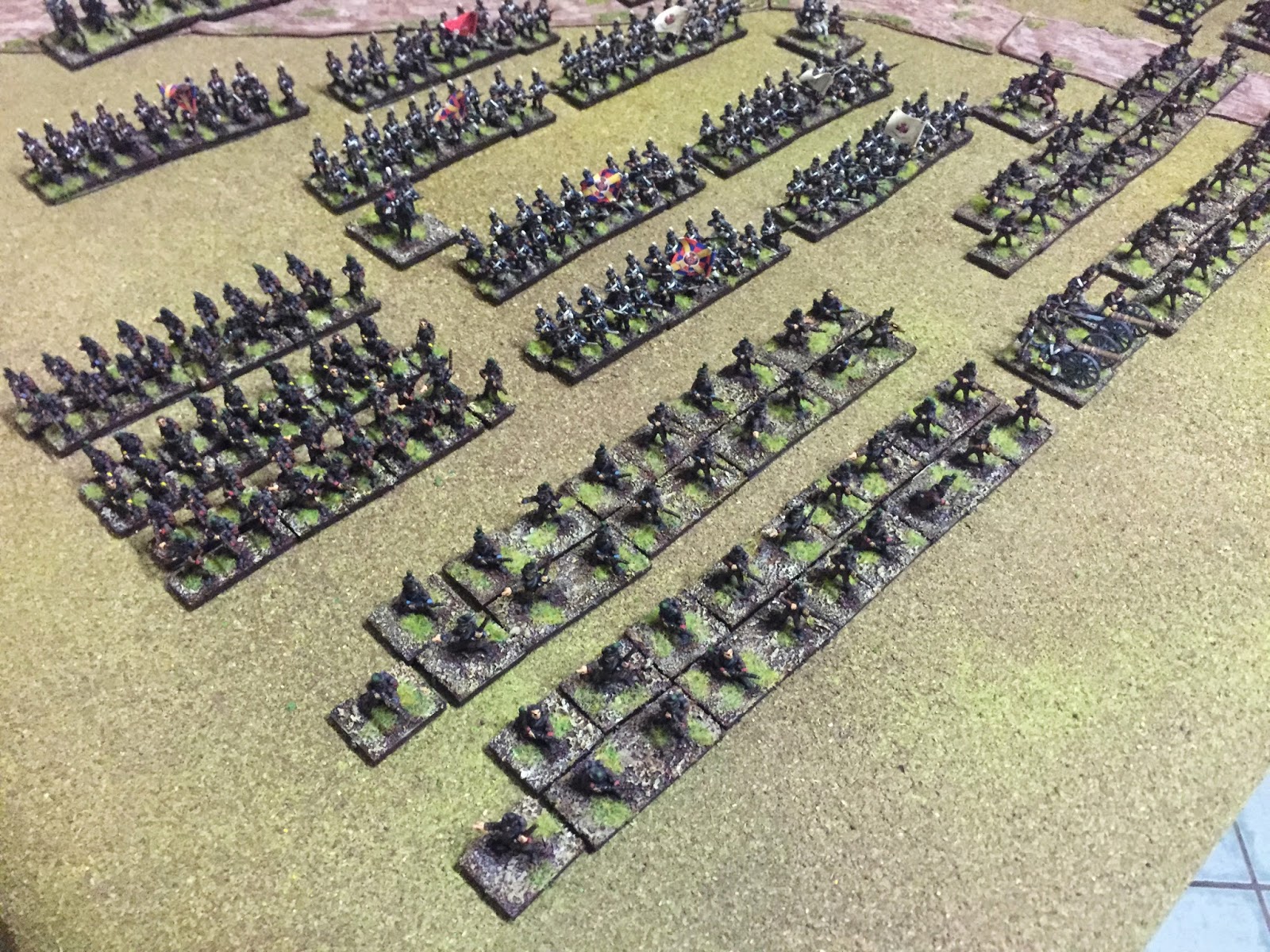 It's not that they won't be employed on the field of battle, rather that they are unlikely to be used together as a full army, especially as they will normally be operating alongside the British in any games our group undertakes: 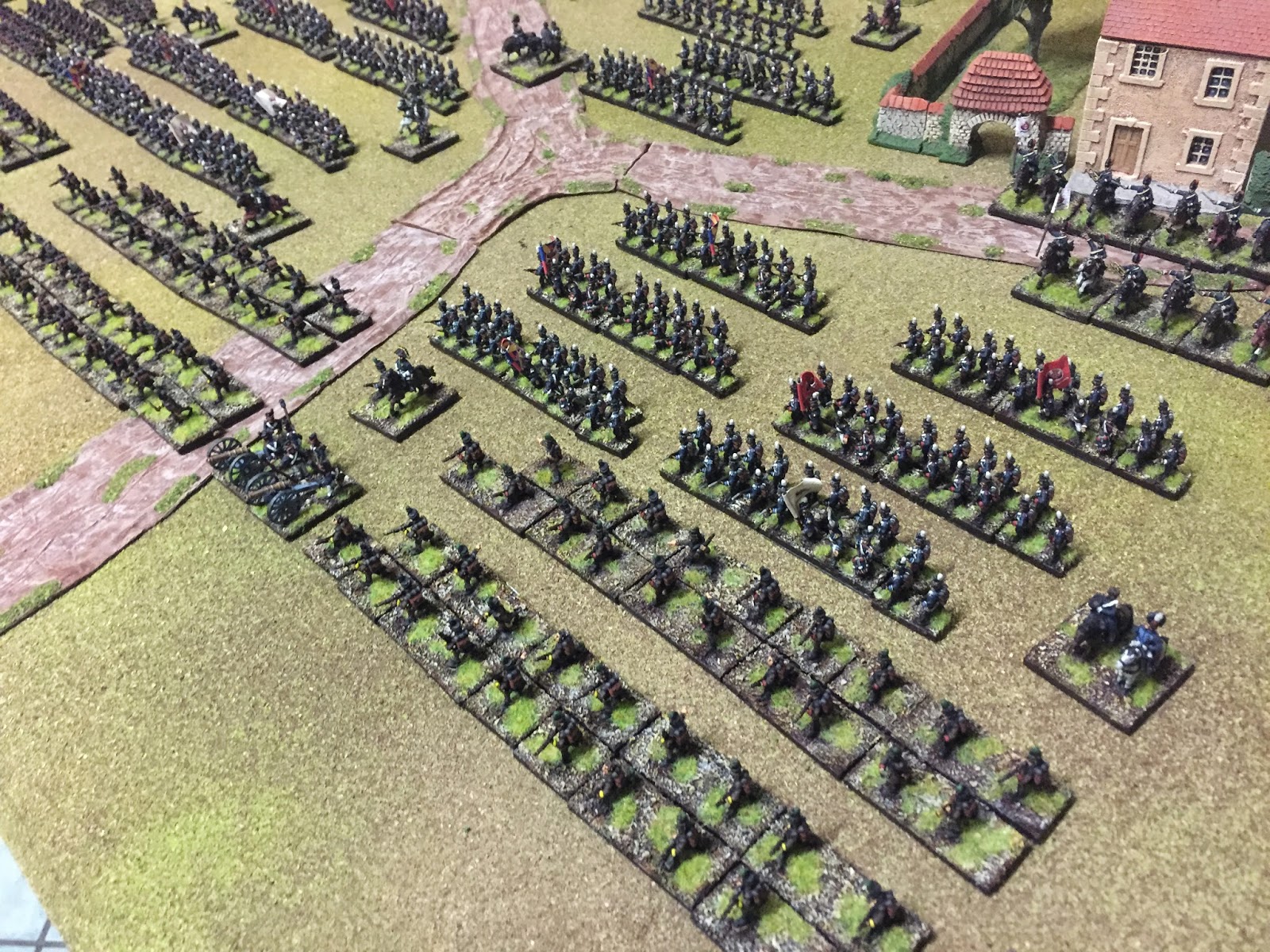 All things considered, this was slightly more satisfying to put together than my Essex Miniatures 15mm Spanish army, mainly because there were a few figure variations in each pack of the infantry (as opposed to a single pose with the Spanish infantry) to break things up a little and relieve some of the monotony of painting several hundred figures: 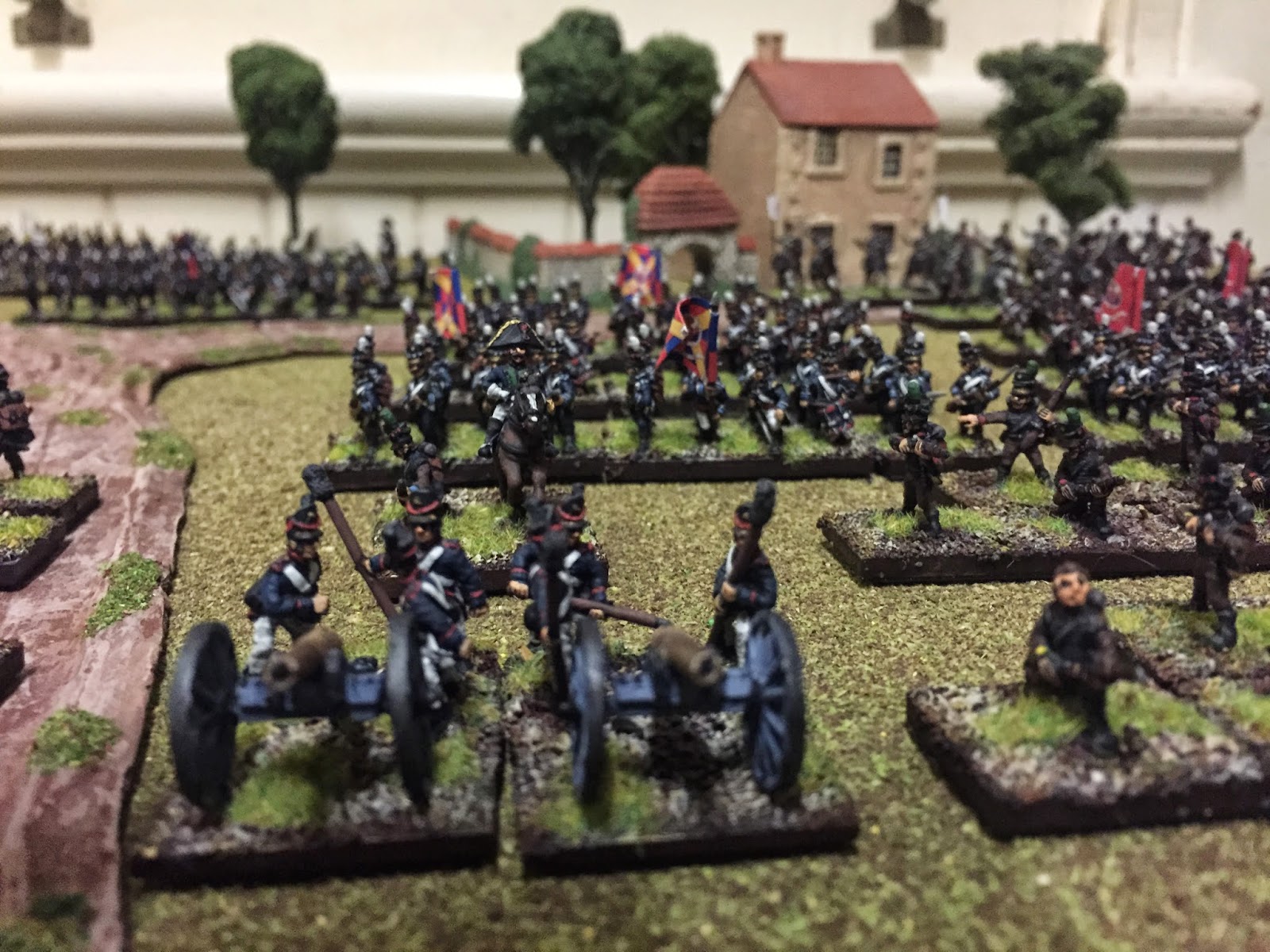 I decided to go with black chords on the jackets of the Cacadores rather than yellow, on the basis of the Rene Chartrand Osprey where he implies that yellow lacing and chords was a relatively short-lived phenomenon, even before the  Cacadores had swapped their Barretinas for the British-supplied stovepipes. This was apparently due to both expense and lack of supply, but I am still wrestling with whether I have done the right thing here, especially as many other examples I have seen are sporting the yellow: 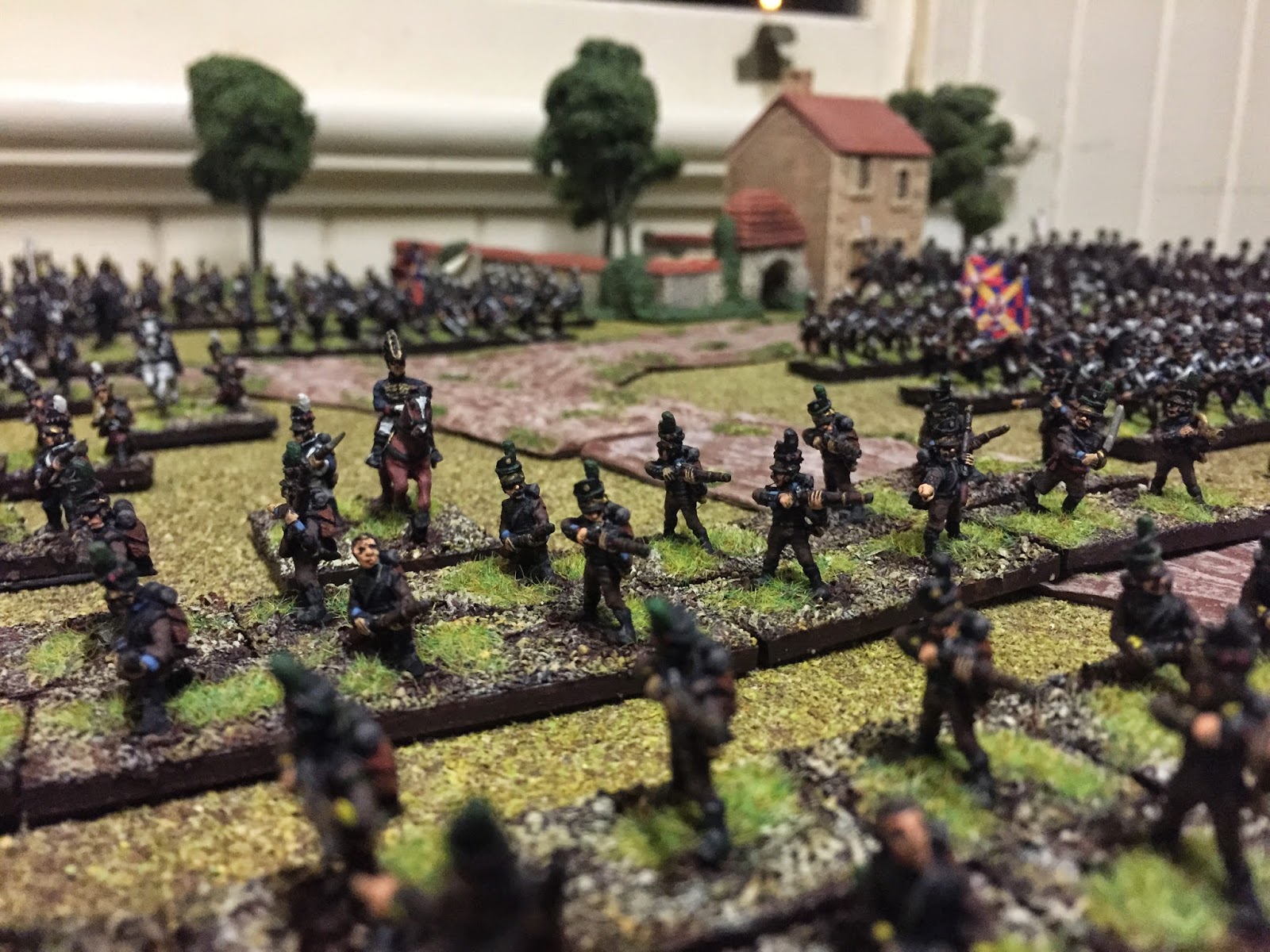 All up, I have counted 603 foot, cavalry and artillery figures, 41 horses (33 of them cavalry), and six artillery pieces: 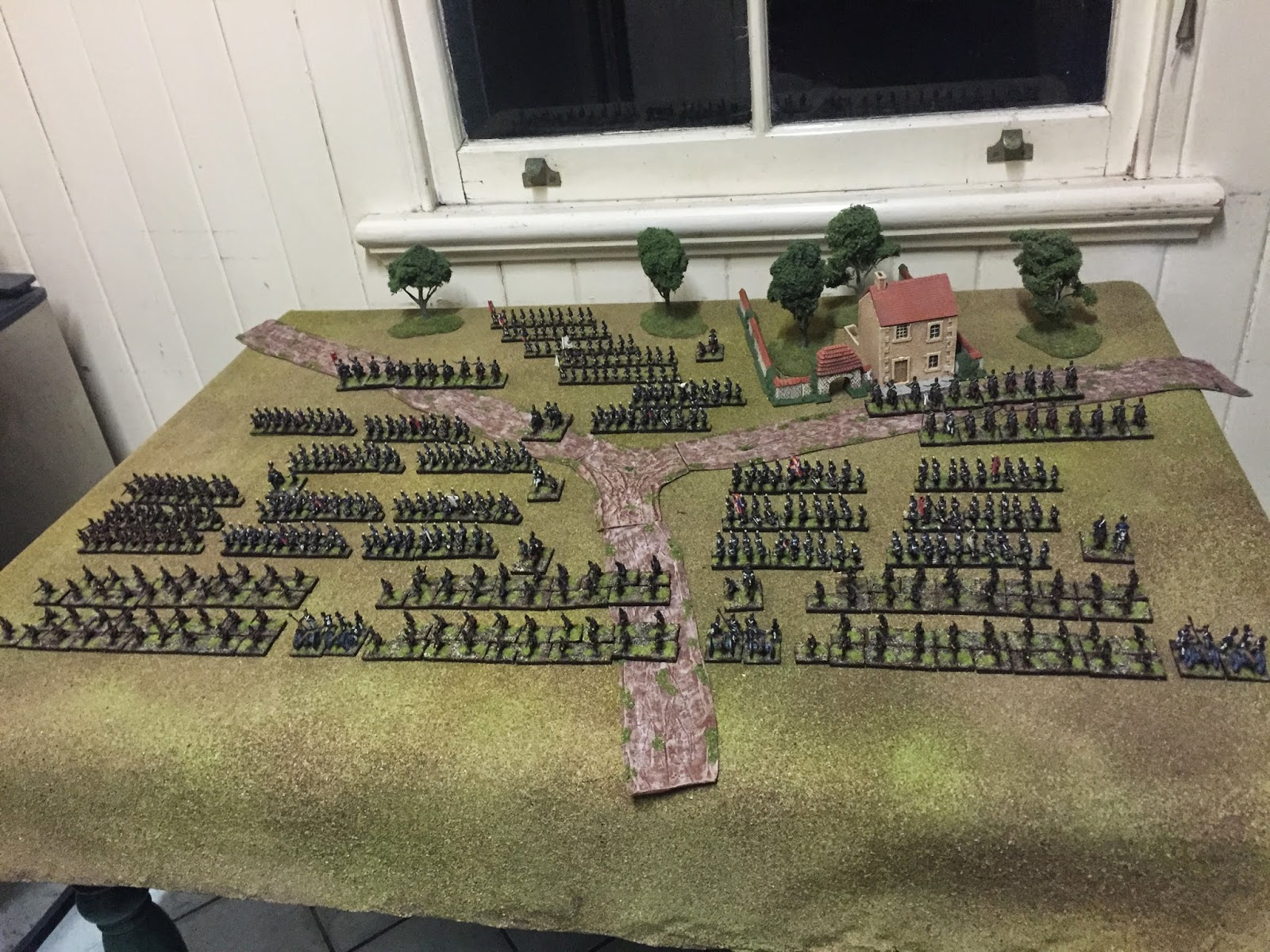 Now off to do the same thing with some Front Rank 28mm Portuguese, which I am quite looking forward to getting into as I do feel much more comfortable at that scale. Looking at the above, I should probably also consider having the kitchen repainted...

The last of the units for this 15mm Portuguese project; some recently completed Portuguese militia battalions: 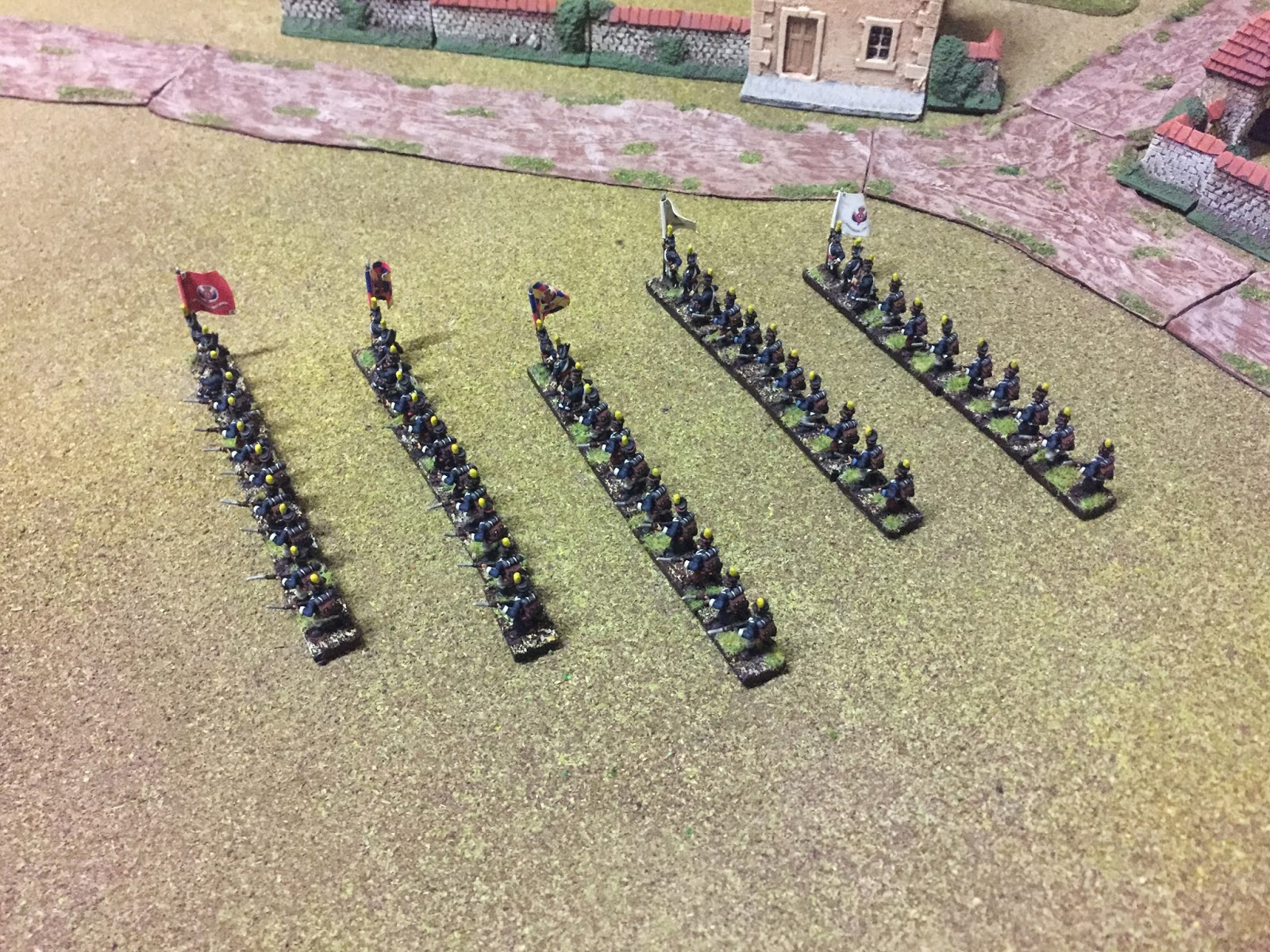 As with the line, the militia belonged to the South, Center or North division, with their piping and turnback colours being red, white and yellow respectively. Unlike the regular line however, they had yellow (as opposed to white) plumes, and the officers and NCOs could often be found in bicornes in contrast to the shakoes of the line.


I personally find the yellow plumes slightly unbecoming, but apparently they were quite popular with some of the dandies of the day who enrolled as officers in the militia battalions upon the outbreak of hostilities with France, and many undoubtedly added their own affectations to the standard pattern: 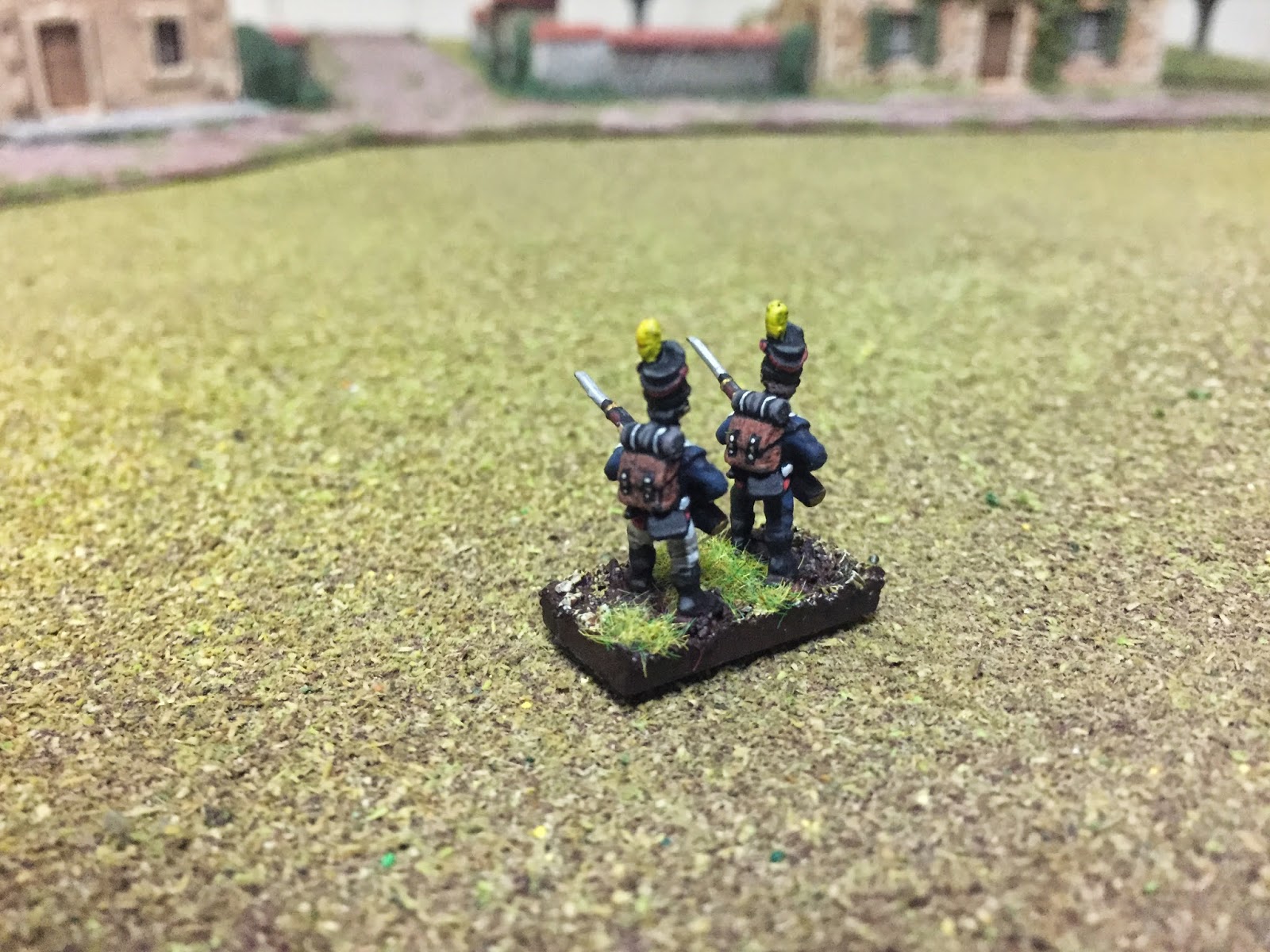 Here are three from the Southern division in the form of the Lagos, Tavira and Beja battalions: 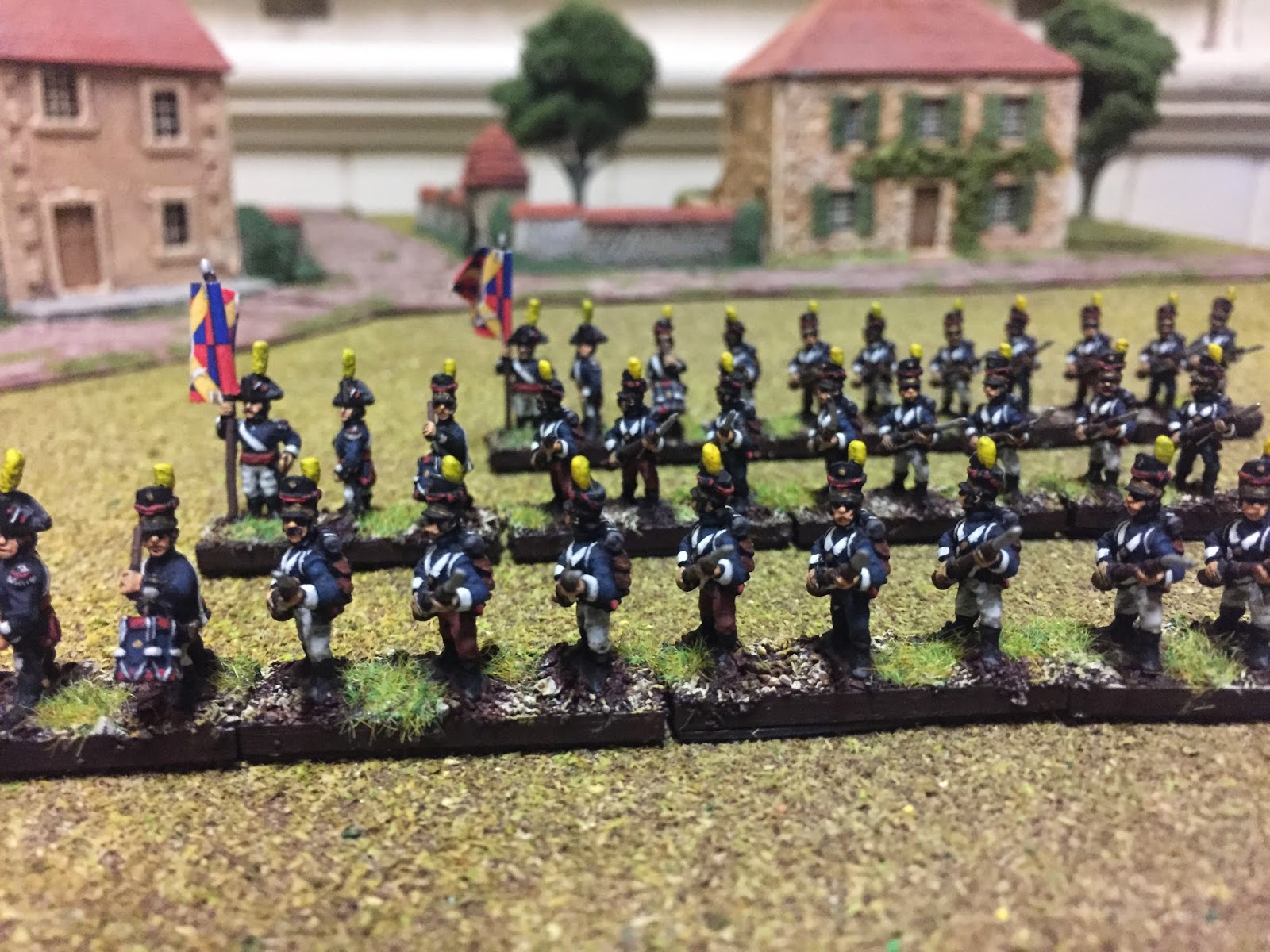 and the Lisbon and Oliveira dos Azemeis battalions from the Central Division: 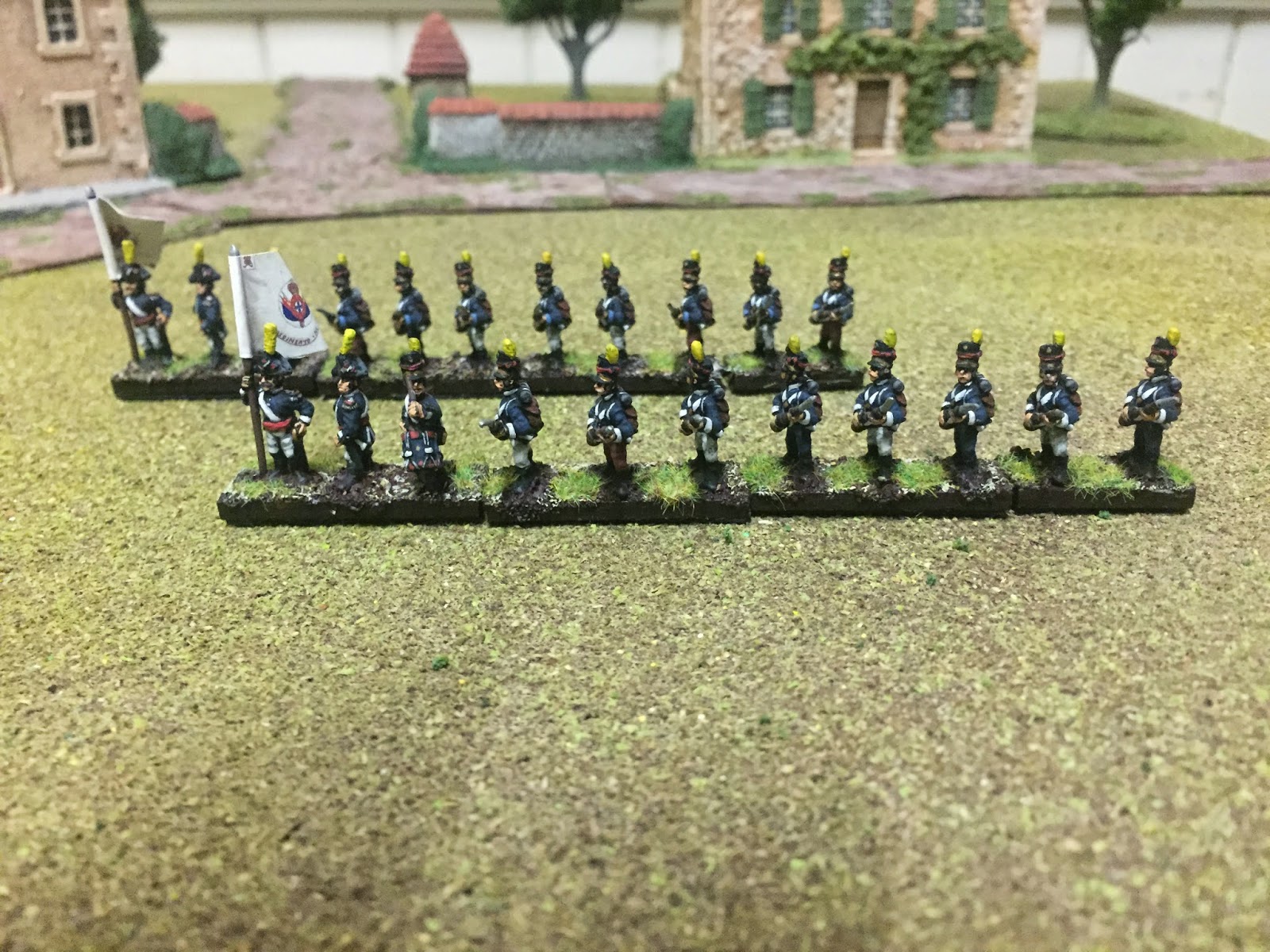 The militia were mainly employed in the defence of towns and on garrison duties, so it is unlikely they will see the light of day in any of our games. Unless of course we mount an Iberian campaign at some point, in which case they might come in useful.
Posted by Lawrence H at 05:18 4 comments:

I probably should have put the Portuguese part of the title to this post in quotation marks as they are essentially a mixture of Austrian and Russian Essex figures: 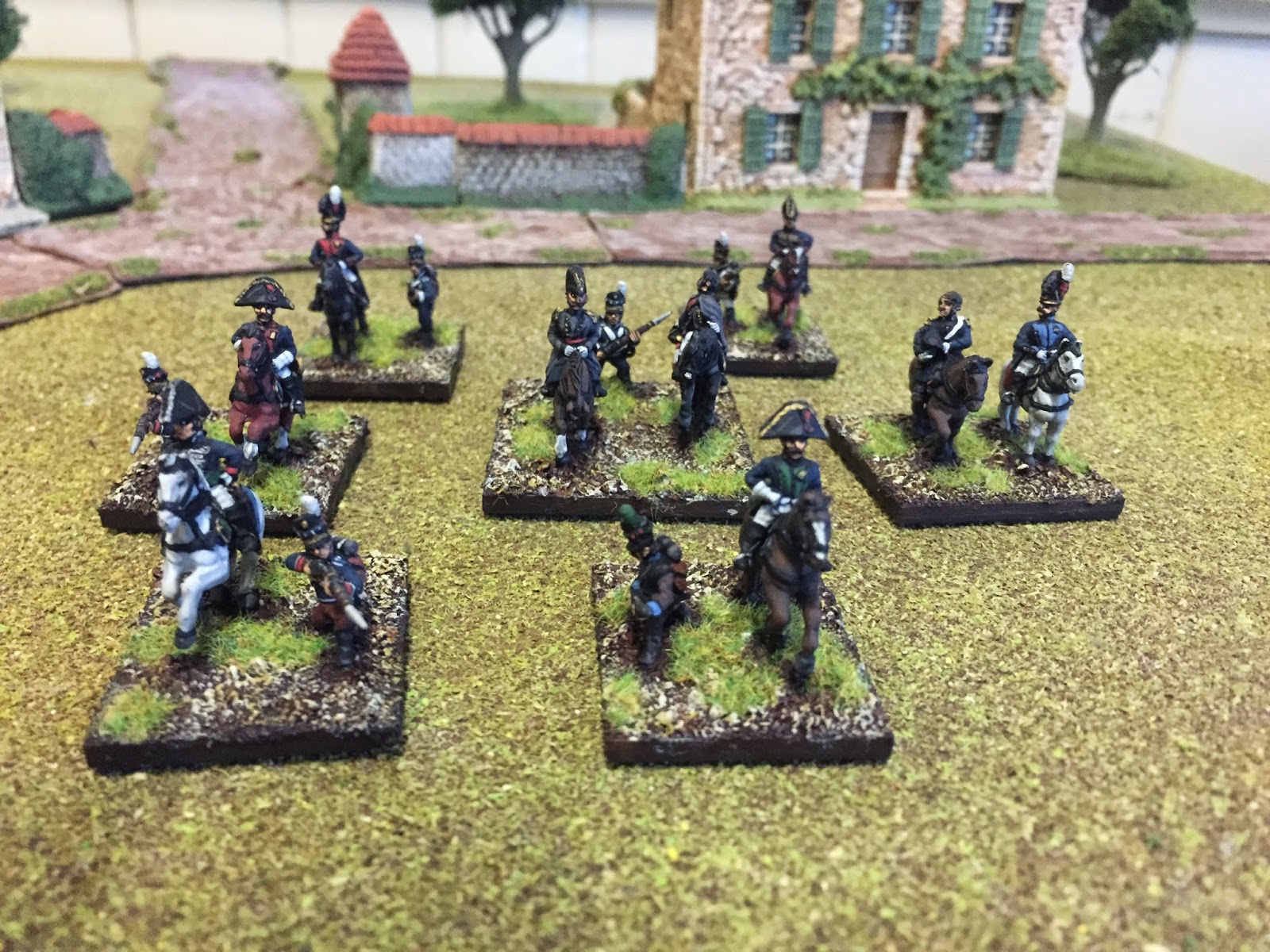 The reason I pursued this line is that most of the other figures, such as AB, do tower over the true 15mm Essex and would therefore possibly have looked even more out of place. I am not however altogether unhappy with the result, especially given that Napoleonic staff uniforms could often be eccentric at the best of times: 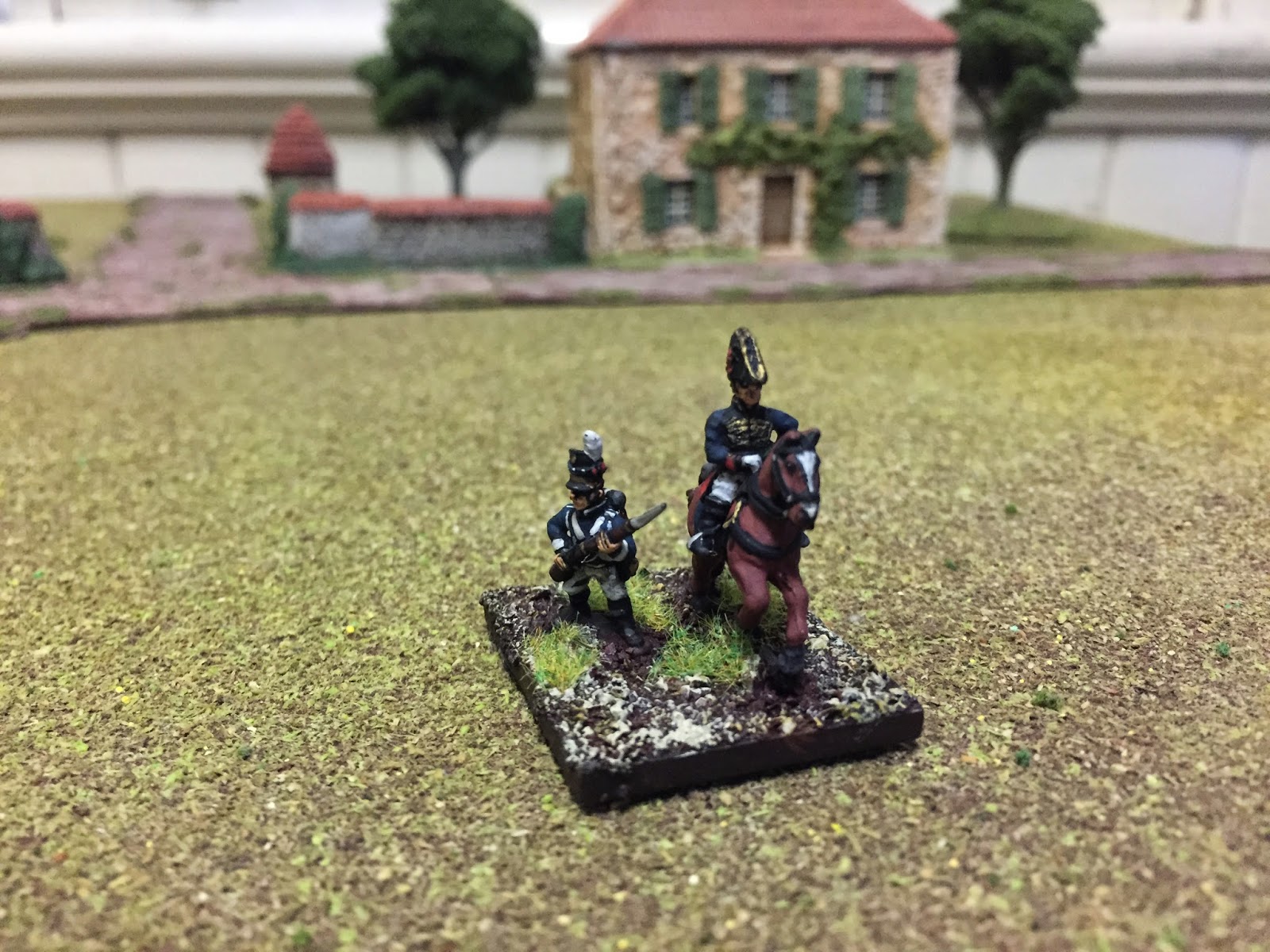 Most of these have been based as brigade commanders, on the assumption that they will normally be operating alongside our Peninsular British in the games we have planned going forward: 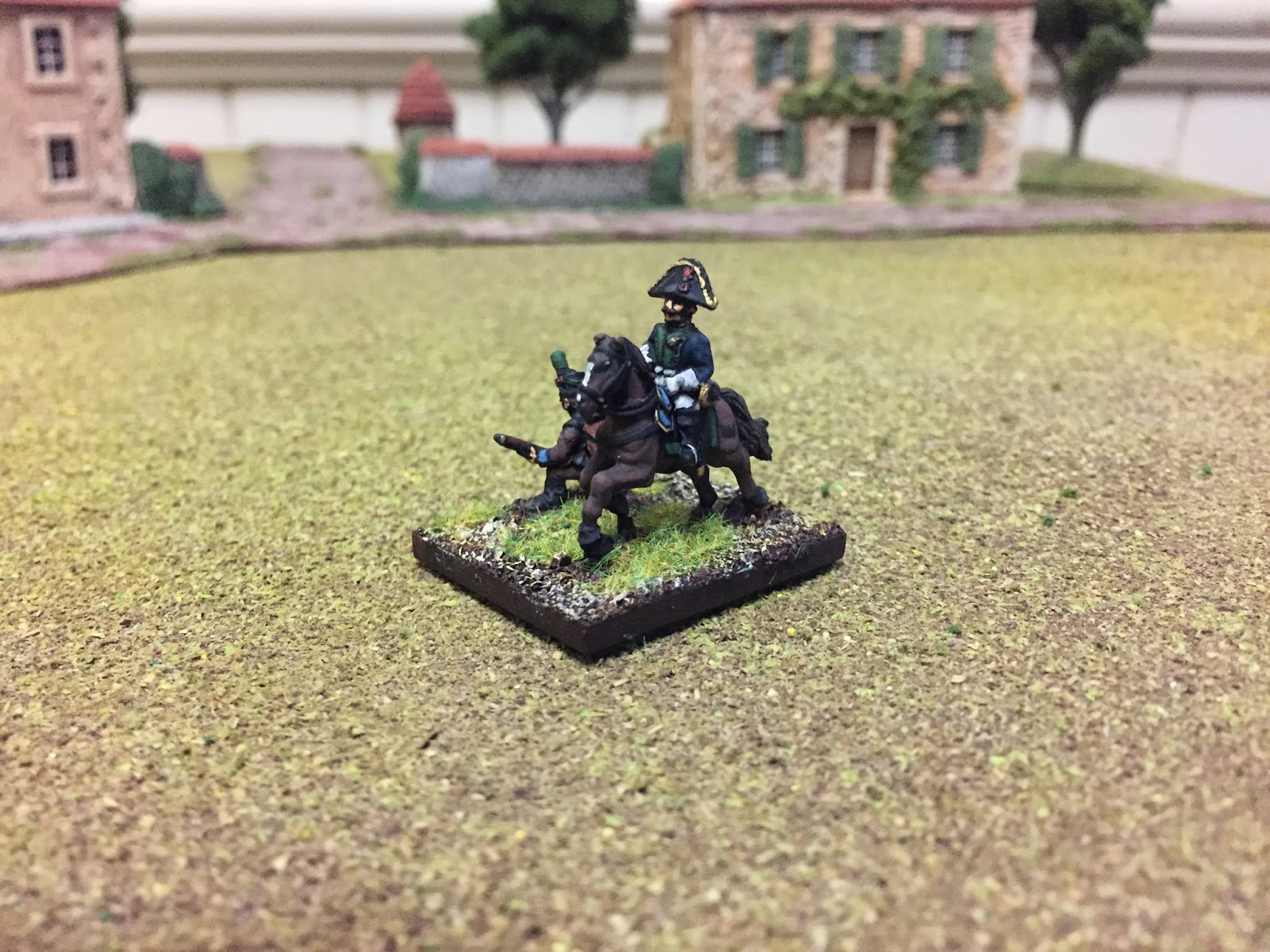 Just five small battalions of Portuguese militia to finalise over the coming days, and that should then be another army completed.
Posted by Lawrence H at 03:42 2 comments: