A quick post to round out July in the form of some medieval peasants. Many of the DBMM army lists, including the Spanish, allow for a few elements of armed peasants with six elements of five figures each sufficing for most purposes: 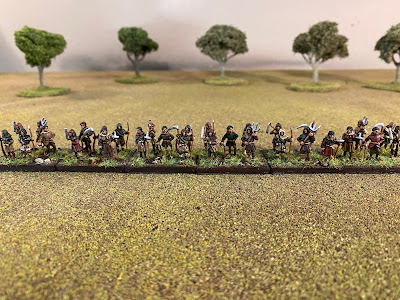 The figures are again from Khurasan in packs of six figures in different poses: 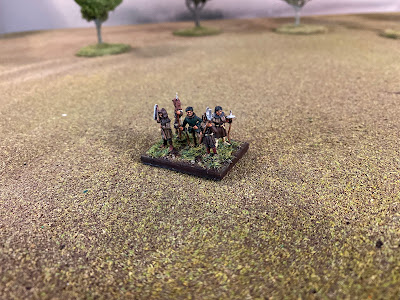 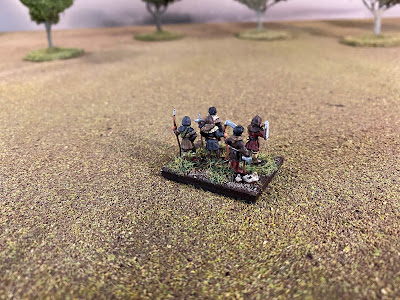 In spite of the rather drab subject matter these were fun to paint, so were very pleasant peasants: 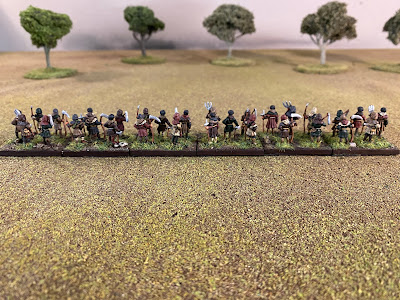 I also found another pack of handgunners I had missed, so completed them at the same time before I forget how I did the original batch of 24 figures: 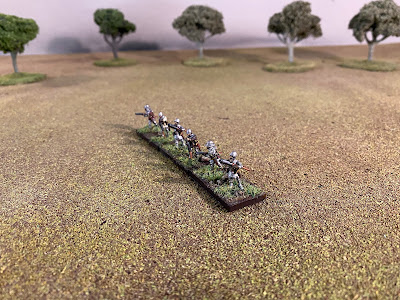 Next up some Spanish spear-armed infantry with large pavise-style shields, which should afford me the opportunity to splash on a bit more colour than I have employed in this project thus far.

Another slight diversion from the medieval Spanish army, English longbows nevertheless are a welcome addition to the Portuguese option in the DBMM Spanish list. They are rated superior which means they are very useful at eliminating, or at least pushing back, most troop types that cross their path: 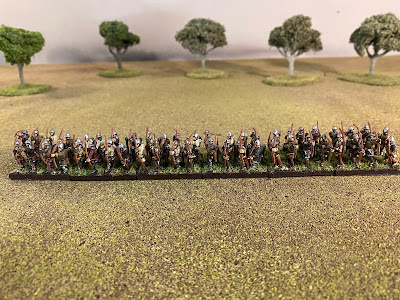 The DBMM list allows for up to twelve allied elements which is fortuitously what I had in the English medieval pile. Rather annoyingly however the 100 Years War English list allows for potentially a lot more than that, which is something I did not fully comprehend when placing my initial order. I have since ordered another dozen elements' worth which I'm hoping I'll be able to complete soon after the rest of the Spanish, and while I still remember how I tackled this lot: 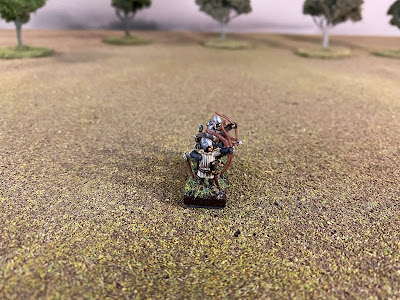 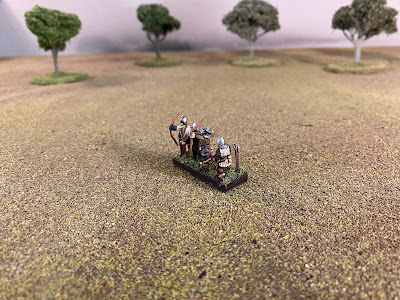 As with the bulk of my medieval figures, the figures are from Khurusan and are available in two packs of six poses each, so twelve poses in total, and each figure is supplied with a separate stand of arrows: 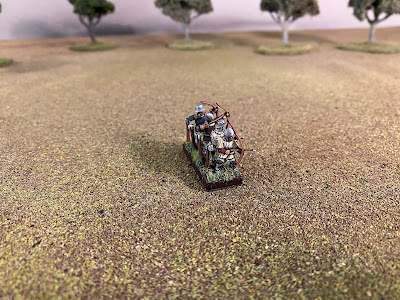 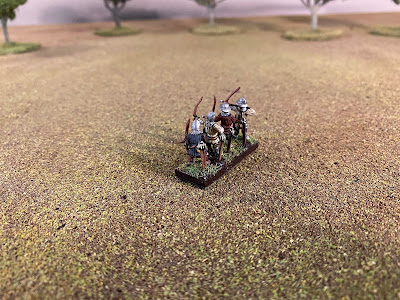 After the French crossbowmen, I have again thoroughly enjoyed painting these figures: 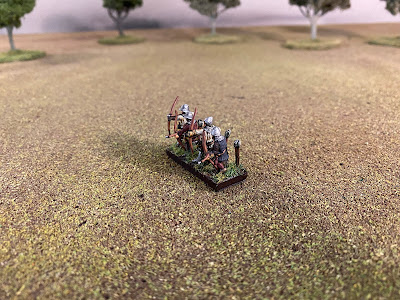 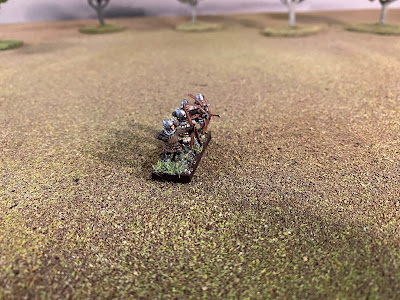 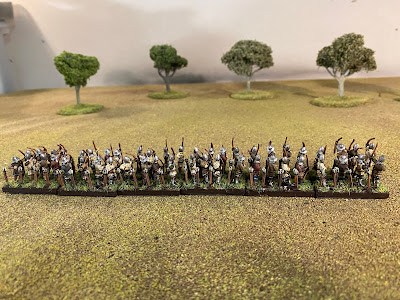 Next up, some Spanish peasants (and a few extra handgunners I rather annoyingly found after having completed the initial batch a few weeks ago). I'm saving the Spanish knights, who I hope will turn out to be the star of the show, until the end of the project.

The DBMM Spanish army list allow for two elements of allied French crossbowmen which I thought would be a nice addition. I found twelve elements' worth in my French pile and thought that I may as well paint them all as it will represent a nice start to the French medieval army I have ahead of me: 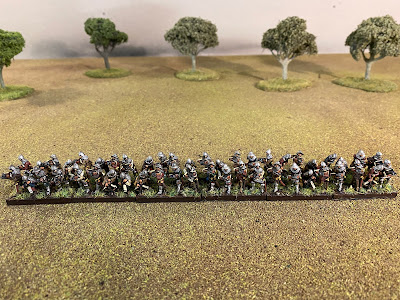 The figures are again from Khurasan Miniatures and I really enjoyed painting them. These are much more substantial than the more slightly-built Spanish crossbowmen I completed a few weeks ago: 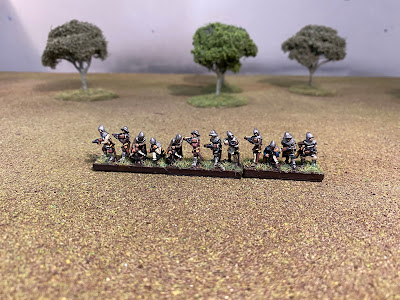 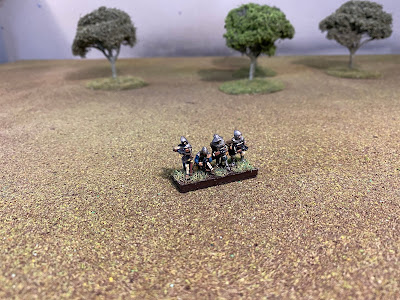 They wear a variety of armour and helmets and are available in six different poses: 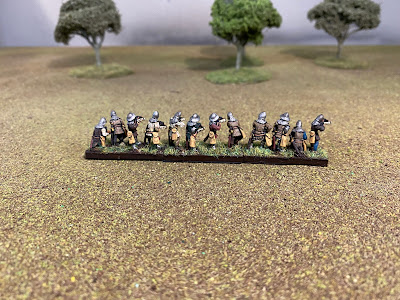 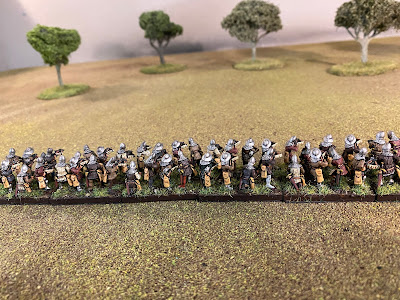 I figured it best to get them all completed in one group as otherwise I struggle to remember how I approached painting the figures, especially if I leave too much of an interval between batches: 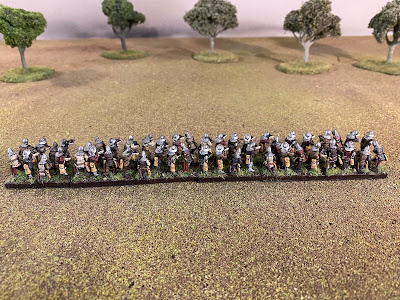 In spite of this segue I believe I am still on track to field the completed Spanish army before the end of August, although the next batch to be completed will be some English longbowmen who are also an allied option albeit for the Portuguese variant of the Spanish list.

When I placed my initial order with Khurasan Miniatures I missed the fact that the DBMM army lists allow for up to 18 elements of ordinary cavalry, so a quick order for them and a few other bits and pieces rectified the situation. I ordered 12 elements' worth in the belief that, alongside all the other troop options in the list, it is unlikely I will ever field more than that: 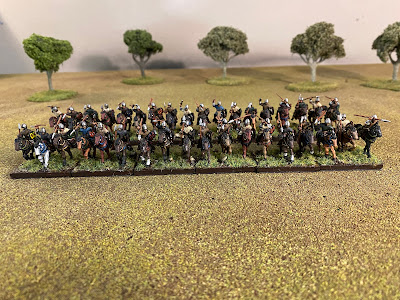 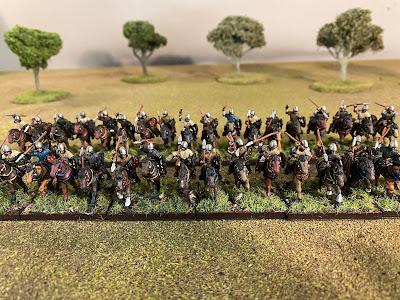 Only a few pictures of these as the figures are the same as the Jinete light cavalry a few posts ago, just based in elements of three rather than two: 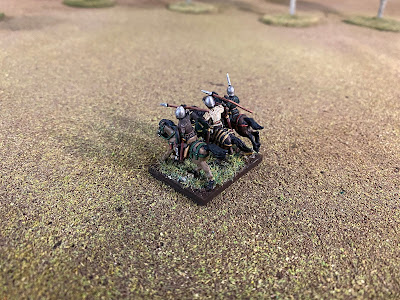 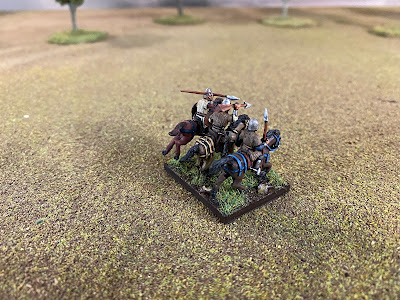 They do represent another significant step forward to the completion of this army however. 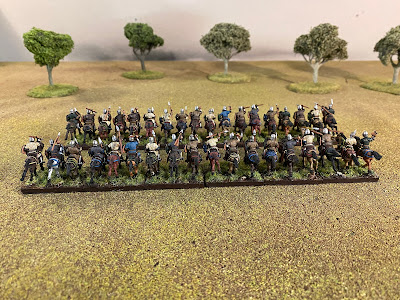 The end of July is now looking a little ambitious for the completion of this project, but I am still hoping that August is a realistic timeline for the army's first game.