Rather than having to field an army of primarily knights, the Tibetan army list provides an option for Chi'ang or Sumpa nomadic allies, or Uighur mercenary cavalry.

This seems like a good option to have available depending upon the opposition, especially as they are regular troops of decent or superior quality, so I set about putting together fourteen elements of these: 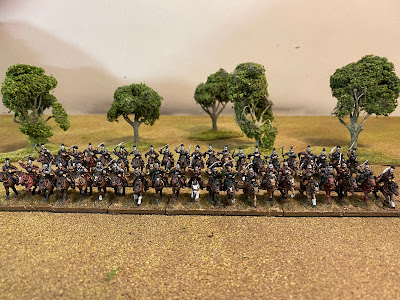 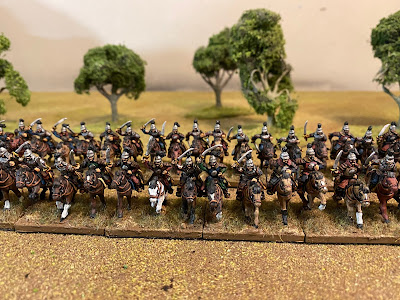 The figures are again from Khurasan, but from their Mongol range. I selected these on the basis that they should fit the nomadic bill nicely: 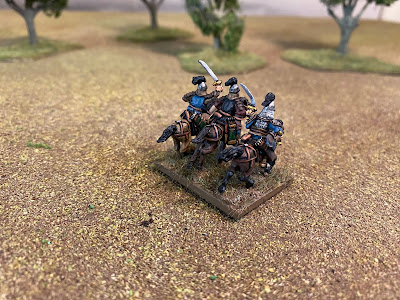 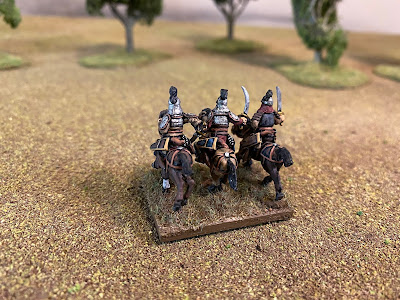 There is a choice of six riders and three horses, available either as steppe or Mongol ponies with the latter having a broader head and shorter legs so I chose the former as being more generally applicable: 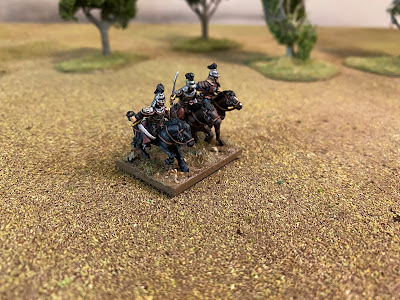 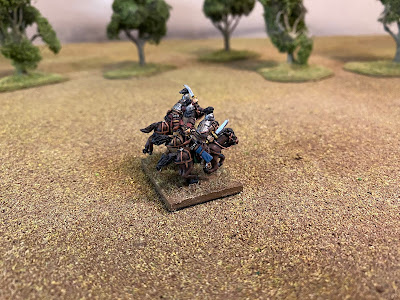 These are very nicely detailed figures, but are more 18mm than the true 15mm figures of the Tibetans. They have also been done by two different sculptors, but are as I say from two completely different ranges under the Khurasan banner: 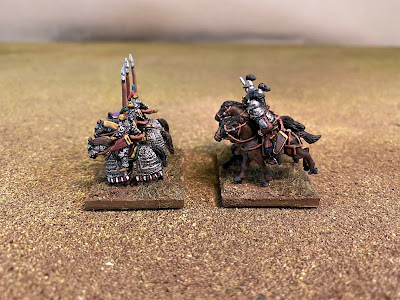 They also will not be mixed within the same unit, so the size difference should not matter in the final analysis: 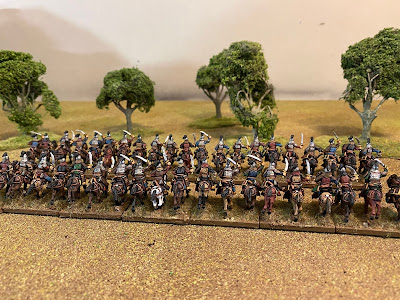 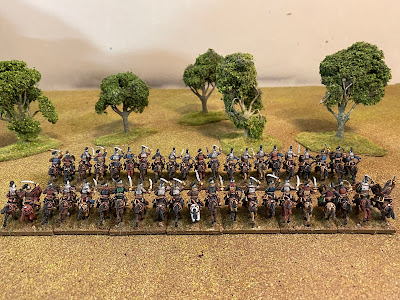 Only around another fifteen elements of Tibetan heavy cavalry plus a few dismounted figures to go now, and that will be the first army completed for 2020. Strangely, and in spite of the enforced isolation most of us are going through, my production rate does not appear to have increased. I can only put that down to my wife also spending more time around home and finding an increased number of jobs that need doing, some of which had been carefully hidden away from all but the most discerning eye and which of course one now cannot find a tradesman to do.
Posted by Lawrence H at 22:49 12 comments:

The TIbetan army list has the option for two artillery pieces in the form of some large rope-pull stone-throwers, and Khurasan had a model which fitted the bill nicely so I couldn't resist incorporating them: 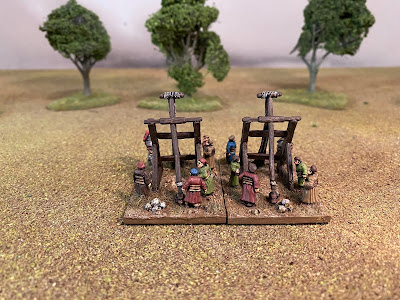 These were from the Khurasan Sung Chinese range and were, to my eye, modeled by a different sculptor as the figures are slightly rounder in stature, but height-wise they fit in nicely with the rest of the Tibetans: 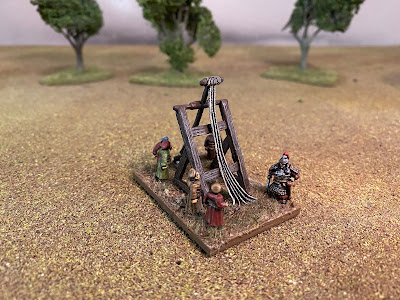 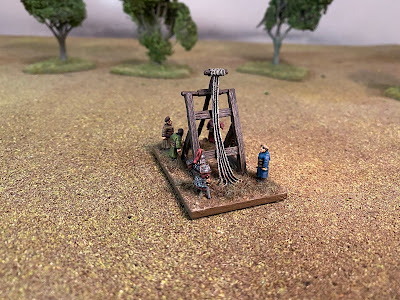 The only issue with these are that the rules call for them to be mounted on a 40mm x 40mm base, but there was no way I was squeezing on of these onto something that small so went with 40mm x 60mm instead. The frontage is the main thing, so hopefully that should be easy to work around: 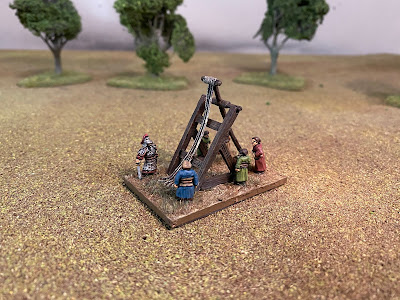 Nice models, although all the figures appear to be standing around waiting for something to happen. Hopefully they will be a little more active when they are in the heat of battle. 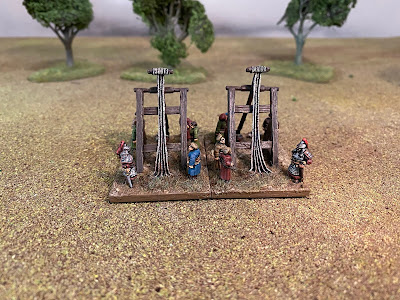 That's the artillery component finished, now on to some allied nomadic cavalry.
Posted by Lawrence H at 01:36 14 comments:

I needed some mobile light horse to balance all the heavy Tibetan cavalry, and therefore completed eighteen elements of nomadic tribesmen: 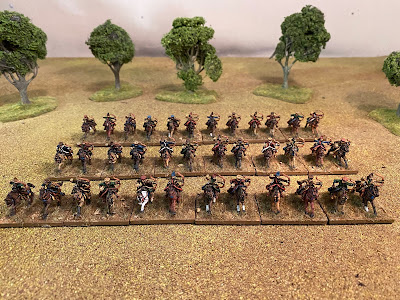 As with most figures in the Khurasan range, there two horse and two rider poses, which is fine when there are only two firgures per base anyway: 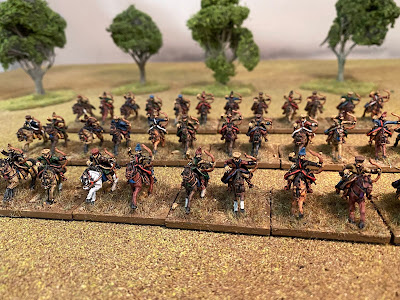 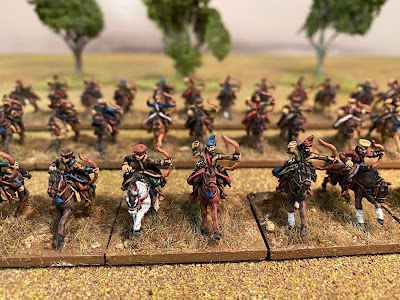 Again, they are on the true 15mm end of the scale, but I was quite pleased with the result and they turned out a little better than I had expected when I first saw the bare metal: 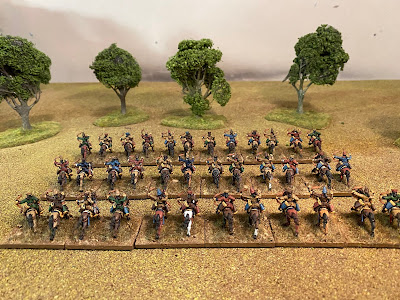 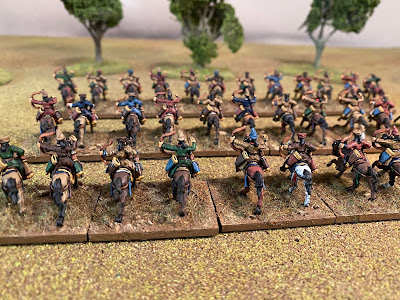 They will be taking the table for this army's first outing this coming Saturday, so I was glad to have them completed in time: 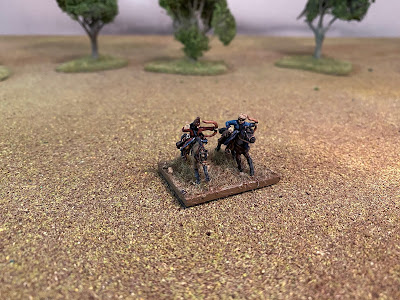 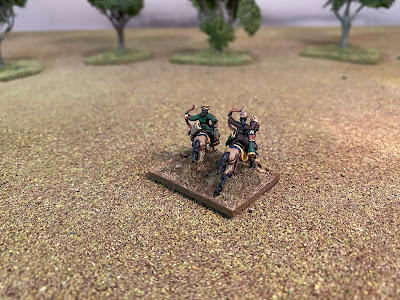 Next up will be some Tibetan artillery in the form of two large rope-pull stone-throwers, which I am also hoping to have completed in time for Saturday's game.
Posted by Lawrence H at 18:54 15 comments: