After the recent completion of a renaissance Ottoman Turkish army I was planning to get back into my 28mm Napoleonic French project, but have decided to take another detour and start on some 15mm Xyston Gauls which have been lying around for several years.

It took just over three weeks, but I managed to complete ninety-six figures toward an army in the form of some warband figures: 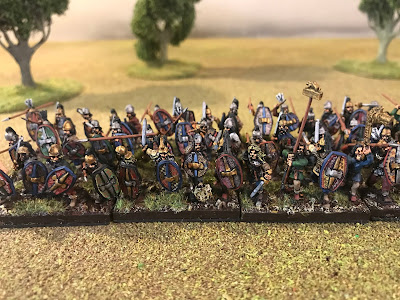 The Xyston figures are comprised of eight warband poses, along with another eight leader and musician/standard-bearing figures, so when assembled they look nicely irregular: 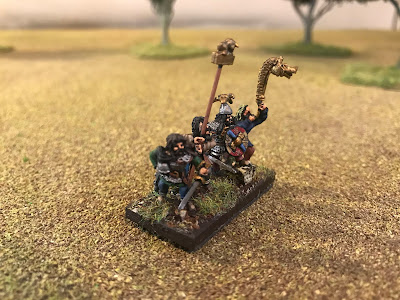 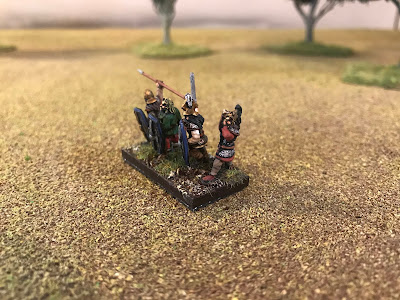 I found it took some adjustment to move down a scale, it being over three years since I last picked up a 15mm figure. The Xyston miniatures are however very nicely detailed and easy to paint, making the transition much easier than I anticipated: 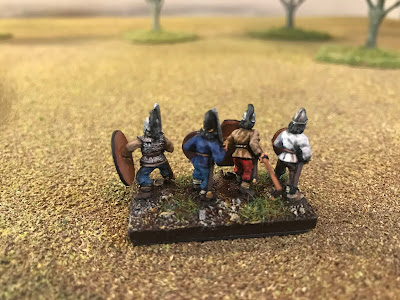 The shield transfers are again from Little Big Men Studios which are great to use, even with my limited modelling skills. I thoroughly recommend a "self-healing" mat and an "Xacto" knife for this purpose: 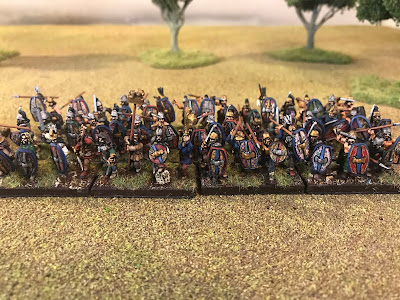 That's pretty much two warbands completed, with another four to go: 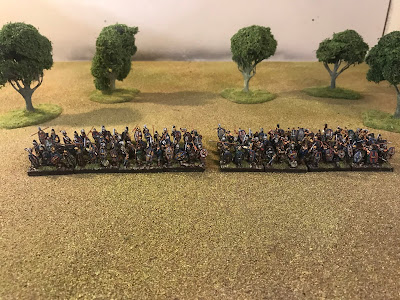 I have the first of the Gallic cavalry on the painting table at the moment, so hope to have them completed soon.
Posted by Lawrence H at 13:49 7 comments:

Having recently finished the artillery, which was the last component of this army, I thought I would gather everything together for a few group shots to remind myself of what has been completed: 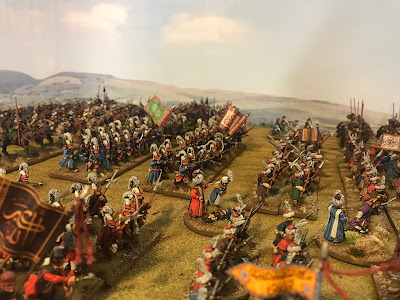 Unfortunately these are not the best pictures and appear to have taken on a sepia-like quality due to my poor photography and lighting skills, but hopefully they will serve to show off some of the fine TAG figures from which the army is exclusively comprised: 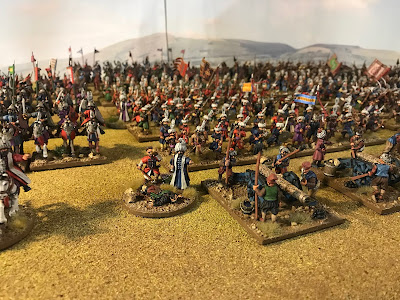 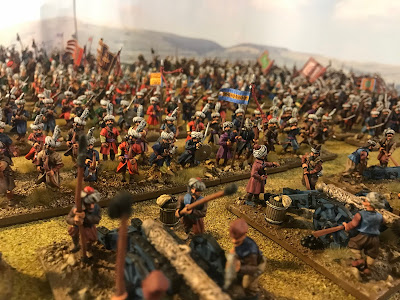 My favourite part of the project was definitely the sipahis, and I managed to complete five units comprising two Sipahi of the Porte contingents: 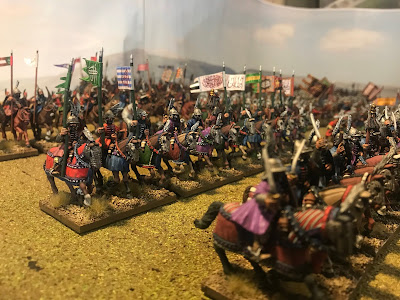 and three feudal sipahi units which can be seen in front of the red-coated Tufekcis to the left and in the background: 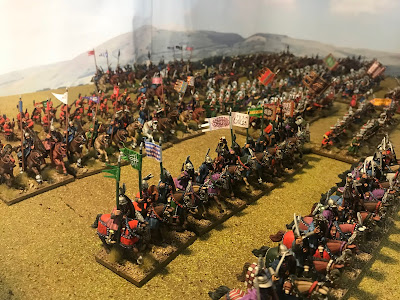 I also ended up with four units of Azabs, thanks to the generosity of Pete at TAG: 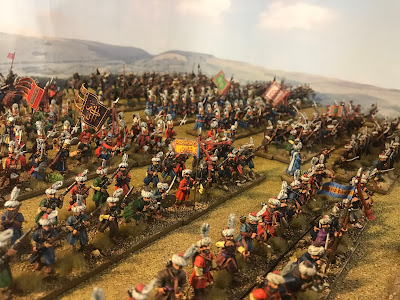 All things considered a very satisfying project, meant only to serve as a slight diversion from my French Napoleonic army slog but one which appears to have taken up the best part of nine months: 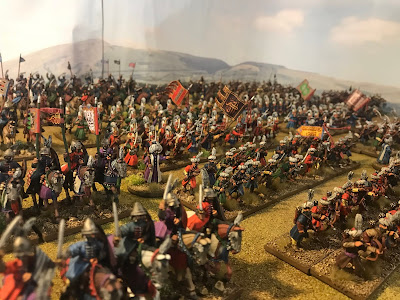 The final tally is as follows:

All up, this means 474 individual figures, and 6 artillery pieces: I was planning to get straight back on to the Napoleonic French after this but, yet again, have become distracted while sorting through the lead pile.

I'm already 36 figures into the new project and hope to have a few pictures posted soon.

Six artillery pieces based which means that the Ottoman army is now complete. I managed to finish them early last week and there was a short delay of a couple of days while I awaited the arrival of some 60mm x 80mm plywood bases from Litko, which I fortunately realised I needed a few weeks ago so the delay in basing was kept to a minimum. 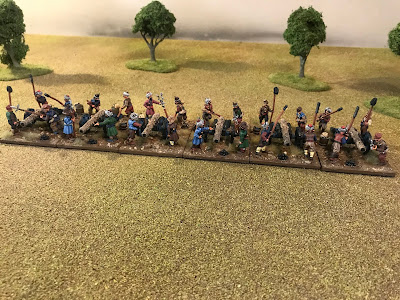 Once again the figures are from TAG, and there are two sets; one where the crew are setting the pieces and the other with the figures loading the guns: 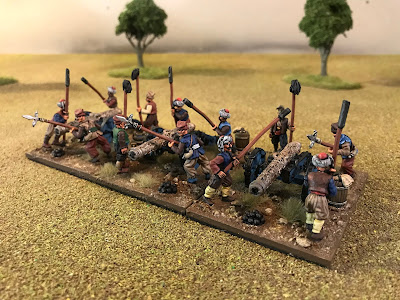 This means a selection of eight different figures, again making for a pleasant project with a sufficient amount of variety: 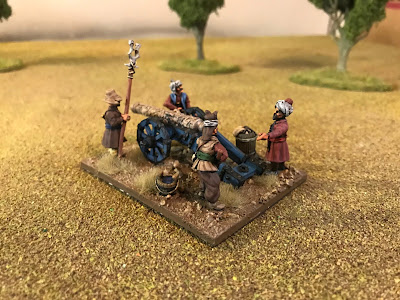 I was initially concerned that the 60 x 80 bases might be too large, but by the time the water buckets, powder barrels and shot had been placed there wasn't a lot of spare room: 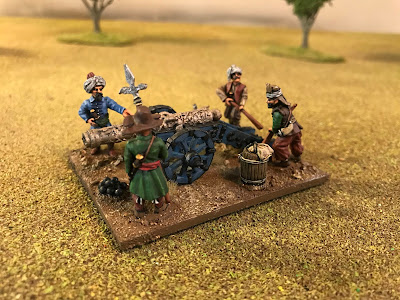 I went with the Foundry Napoleonic British blue-grey colour triad for the artillery carriages, and applied several tones in an attempt to bring out some graining: 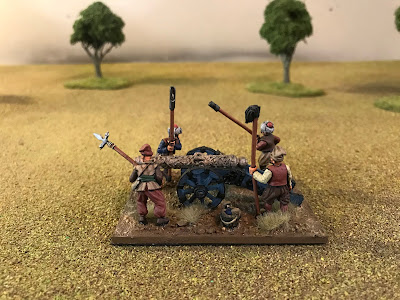 I was originally considering red to give the gun carriages a little more visual impact, but allowed myself to be persuaded otherwise by a picture I found online: 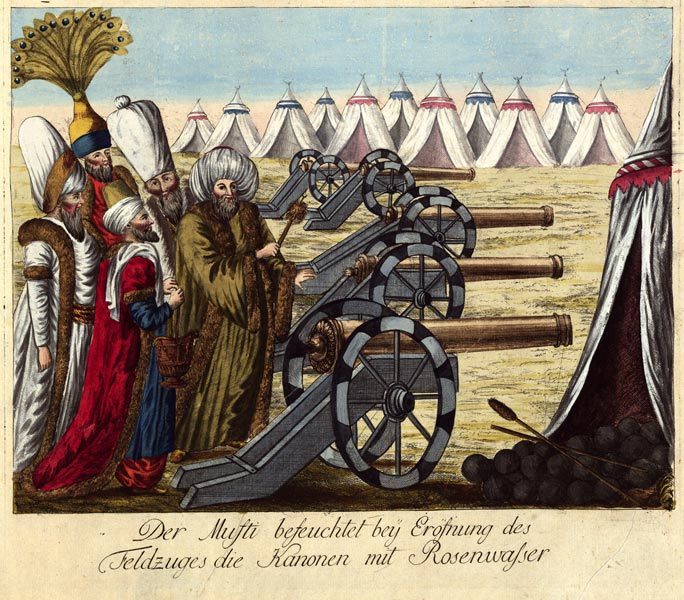 The models actually look a lot more subtle in the flesh than these images would imply and are definitely at the greyer end of the spectrum, something which is not apparent from my substandard lighting and photography skills: 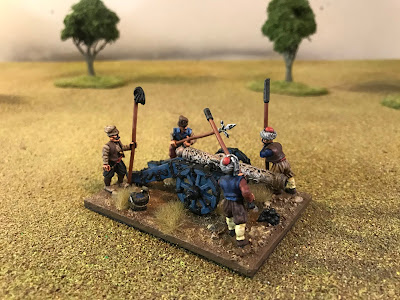 Now that the project is complete I'll gather the army together for a group shot, hopefully over the weekend, but my hobby efforts have been somewhat curtailed by a new addition to the family who is proving a bit of a handful: 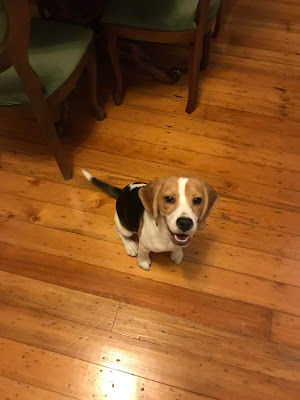