Another two battalions completed, this time the 58th line and again the Perry-sculpted Foundry figures in march attack pose: 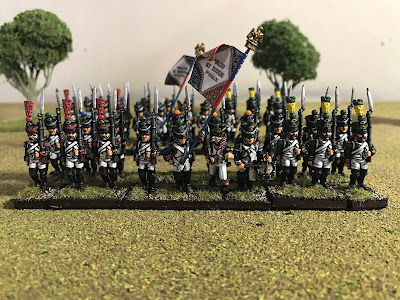 I am much happier with having trimmed the length of the flagpole for this regiment as it doesn't look anywhere near as unwieldy. According to the Terence Wise Osprey the French staves were two metres in length whereas these would now be roughly around four metres (when compared to relative height of the flag-bearer), but I think it looks about right especially with regard to accommodating the GMB flag: 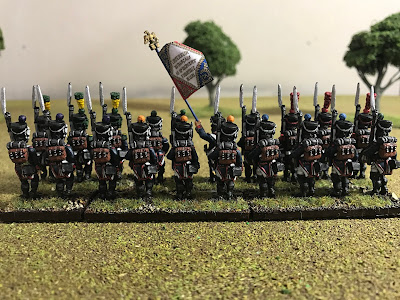 Even after having completed one hundred and twenty or so, the Foundry figures still seem on the smaller end of the 28mm continuum, which I suppose was always going to be the case after having completed two armies comprised mainly of Front Rank figures. The detail is most definitely there however to the extent that the relief on things such as cross-belts in the picture below are actually more a result of the sculpting and shadows under light than my actual painting efforts: 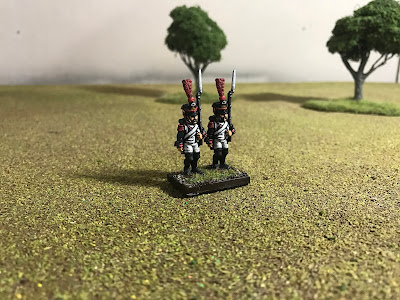 I am also putting a white disk on the pom-poms of fusiliers in the second battalion. I have read conflicting reports as to the accuracy of this, but I think I'll stick with it for the period of (roughly) 1809-1812 I am currently aiming at: 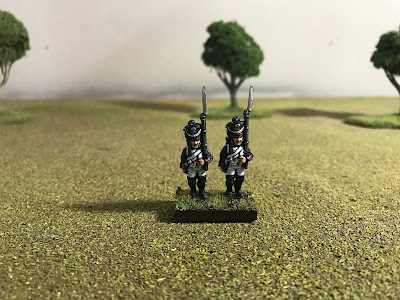 That's three regiments comprised of six battalions done, which is not a bad start to the year. I think I'll probably do one more two-battalion regiment and switch to something else. I spent a fruitless hour last week looking for my Murawski Badeners, and am hoping I'll be able to find them soon.
Posted by Lawrence H at 20:35 13 comments: