The first of four line dragoon regiments, I had originally intended these to be 1st Dragoons. However when I remembered that regiment had been converted to lancers in 1811 and that all my cavalry flags are 1812 issue I switched them to become 4th Dragoons: 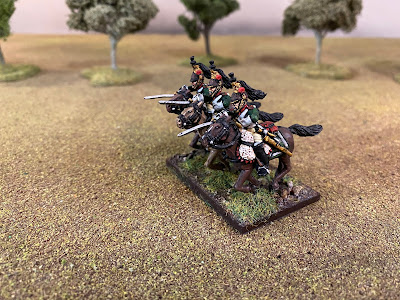 Not that switching them involved any additional work as the only difference between the two regiments is that the 1st had vertical pockets whereas those of 4th were horizontal. Thankfully none of the pockets on these Foundry charging figures are visible (well, apart from the officer, but cavalry officers were notorious for doing their own thing anyway): 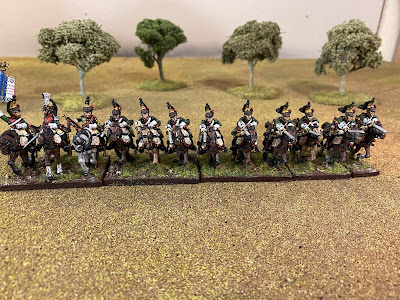 My third attempt at attaching a flag and a label to this unit has worked, which is just as well as I would have run out of spares again: 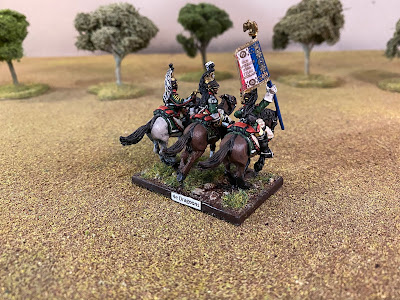 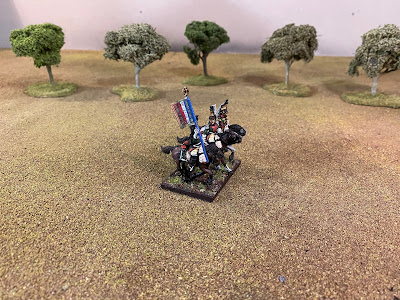 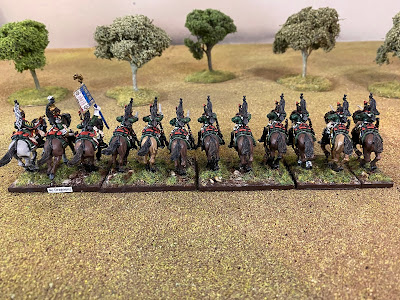 This has been for a variety of reasons, including getting the house ready over the best part of a month for a Christening party for grandchild number one and also an increased study load in an attempt to hasten the completion of a part-time law degree I undertook for "fun" five years ago, but which I am now keen to finish. Next up, the first of three Perry dragoon regiments.
Posted by Lawrence H at 14:03 16 comments:

The last hussar unit, the 1st hussars look a little more what I think French Hussars should look like as opposed to the comparatively staid colours of the 2nd and 3rd regiments: 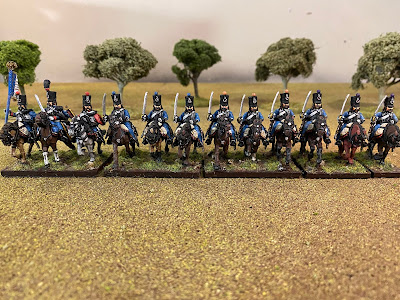 This was the third attempt at attaching their flag, the previous two having disintegrated, but after having given my painting room a decent airing this one appears to be holding. Rather annoyingly I had ordered some replacements along with some chasseur flags, but received two copies of the latter by mistake. Deciding that I am not going to wait another two months, and because they appear to have the same battle honours anyway, I have used one of the chasseur flags instead: 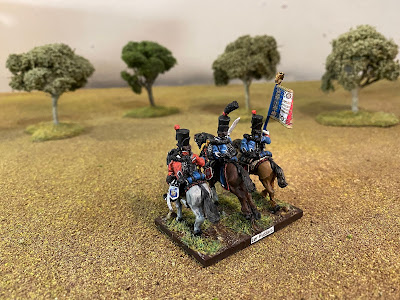 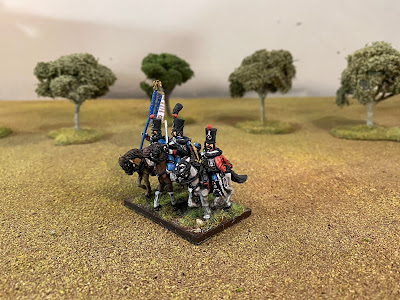 With their pigtails the trooper figures appear a little gnome-like, but at least they have plenty of character: 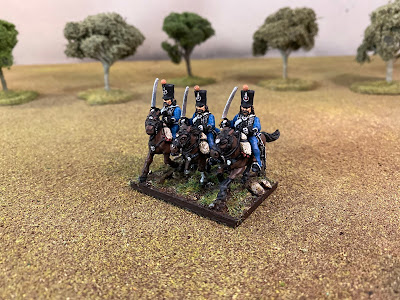 The sabretache decals are by Little Big Men studios, meant for Perry figures rather than Foundry but I managed to get them to fit with a little bit of trimming: 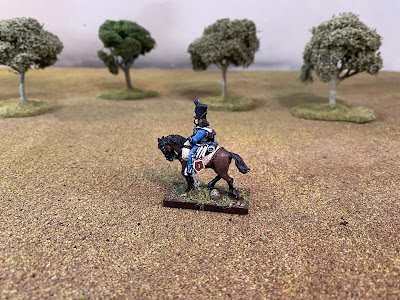 That's three French hussar regiments completed, which is all I am planning on doing: 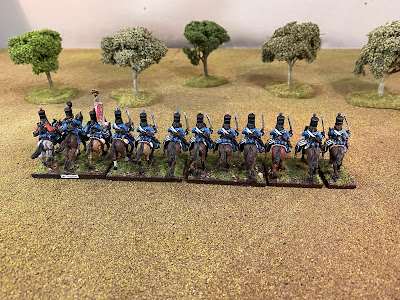 Next up, the first of four line dragoon regiments I have in the queue.

Following my recent disintegrating flag issue a few replacements arrived last week which has allowed me to complete several units, and restore my "flagging" motivation. First off the line are the Empress Dragoons: 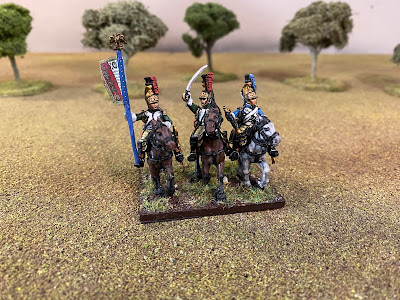 As a Guard unit these are fifteen figures strong, and are some Foundry figures I purchased over ten years ago so it is nice to finally complete them: 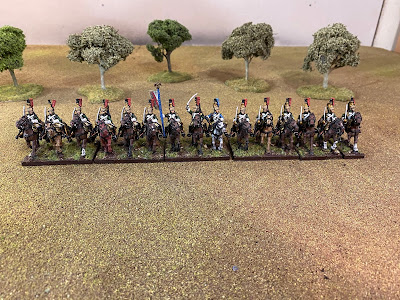 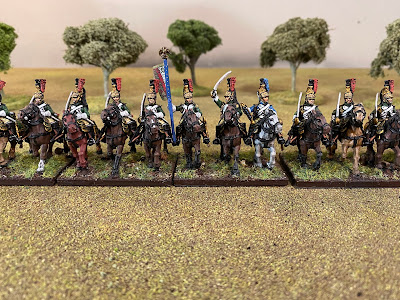 I was pleased with the way they turned out, particularly the command stand with its new flag: 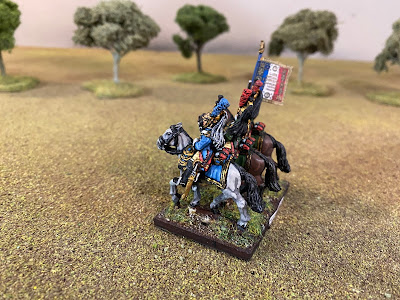 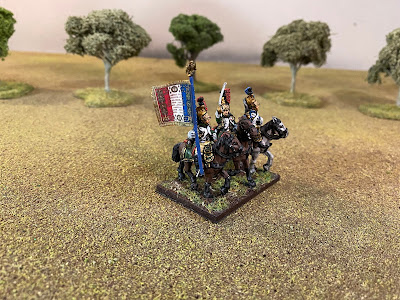 There is also some subtle variation between the trooper figures which is nice: 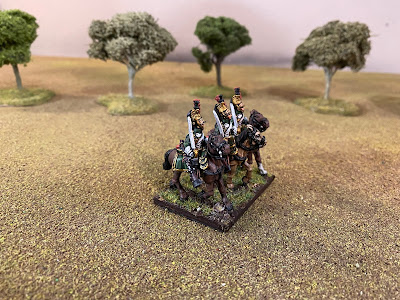 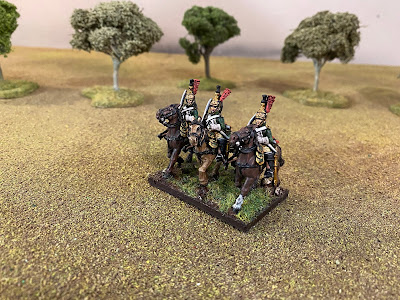 Apart from anything else, it was just nice to get back "on the horse", so to speak: 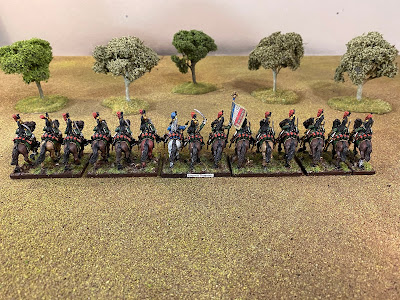 I am still awaiting some further replacement flags from GMB plus some lance pennons from an order shipped in March, so on top of a yet-to-arrive Perry order from December I am hoping that it too hasn't gone astray. With regard to what was causing the paper to disintegrate, I have given the painting room a decent airing and the issue seems to have subsided. I shudder to think what the actual cause may have been but there was definitely something that was reacting with the PVA glue and paper, and possibly the late summer humidity. Whatever it was, I just hope it hasn't had a similar effect upon my lungs. Next up, the 1st Hussars.