After having painted so many ashigaru I was very much looking forward to getting stuck into a camp and seven baggage elements. Of course, most of the figures are ashigaru porters and attendants, but at least there was only a handful of them and there was some nice variety in the poses: 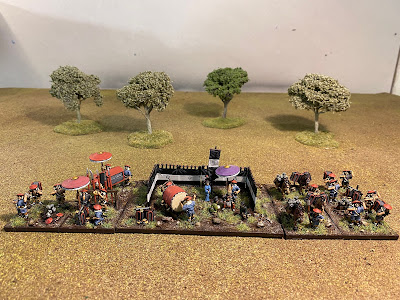 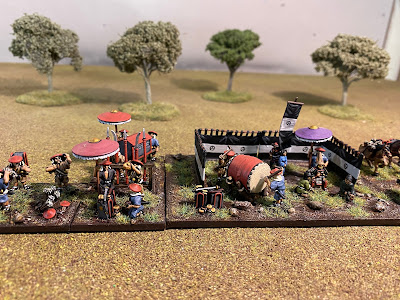 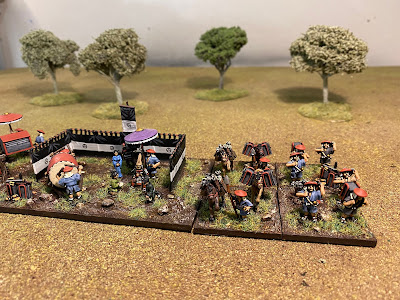 The camp and most of the figures are from Eureka Miniatures, with the drum and drummers, baggage and the ashigaru holding the umbrella from Museum Miniatures. There is no doubt the latter are larger and more rounded than the more slightly-built Eureka figures, but I don't think the difference is too noticeable here: 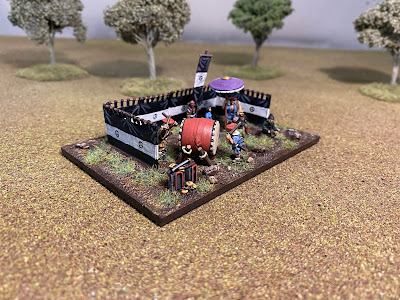 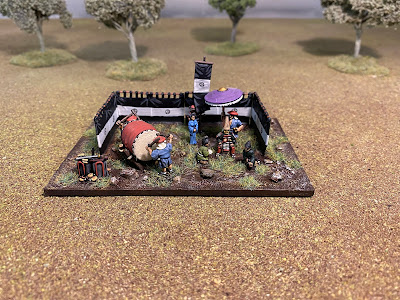 I found the samurai feudal symbols online and have used the circle with the three spokes on a few banners, so decided to use it for the camp as well. I hope in retrospect that it hasn't ended up looking too much like a Mercedes Benz trade display at a motor show: 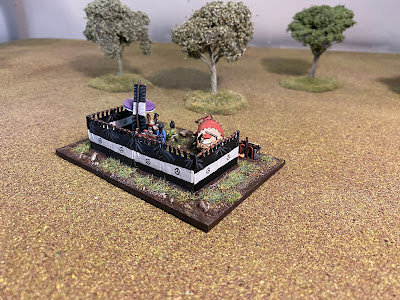 The baggage elements are exclusively Museum Miniatures. They are great figures to paint and certainly a lot more robust than I was expecting them to be. First up is a trio of ashigaru having a drink and something to eat: 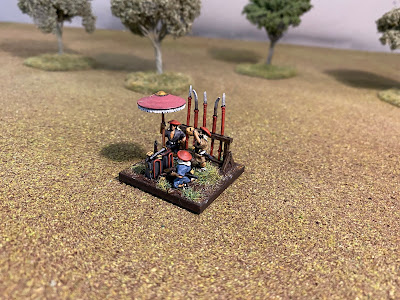 Next some baggage mules: 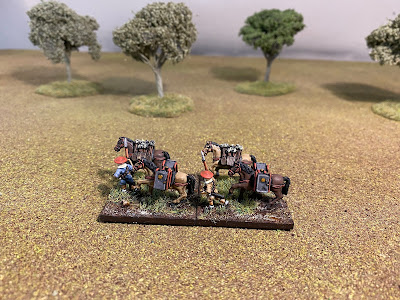 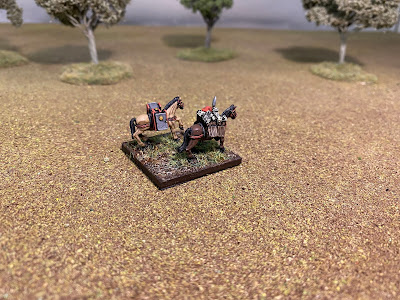 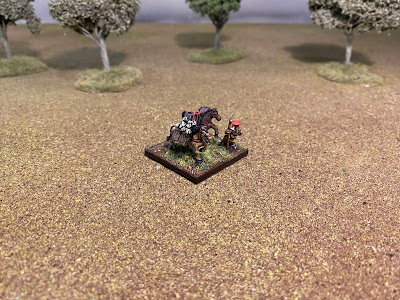 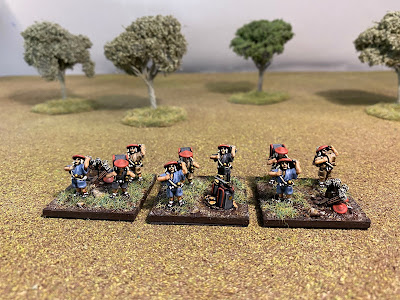 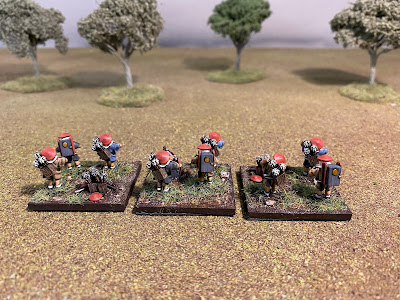 And finally two ashigaru carrying a palanquin, which looks rather uncomfortable for the occupant: 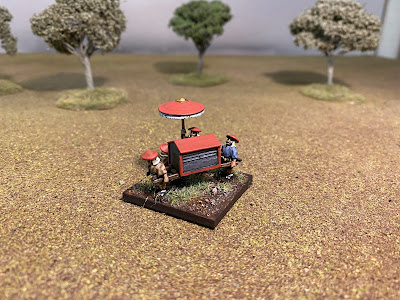 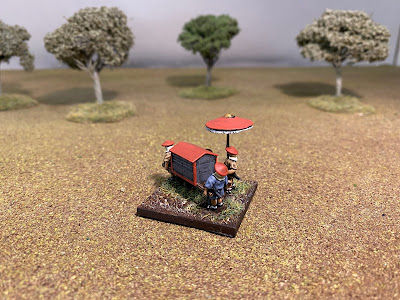 That's the samurai baggage elements completed, with only twenty-one elements of sohei monks now left to finish. With any luck I'll be back into some 28mm French Napoleonic cavalry within a week.

These sixteen elements of bow-armed figures represent the last of the ashigaru. I enjoyed painting these much more than the previous kneeling and running ashigaru armed with yari and naginata, mainly because these poses are more straightforward and all parts of the figures were easily accessible: 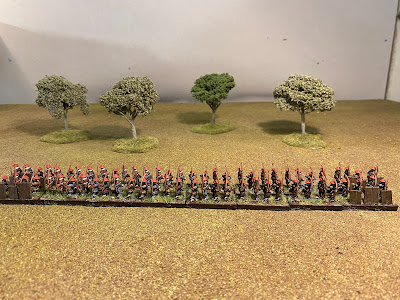 The DBMM rules allow an upgrade to four elements protected by pavises which were also fun to paint: 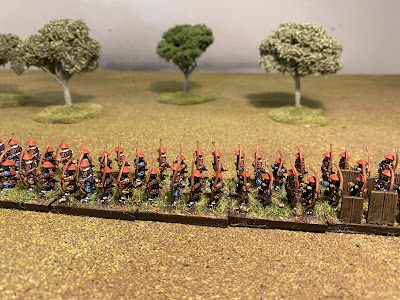 The figures are again Eureka, and are supplied in a standing and kneeling pose: 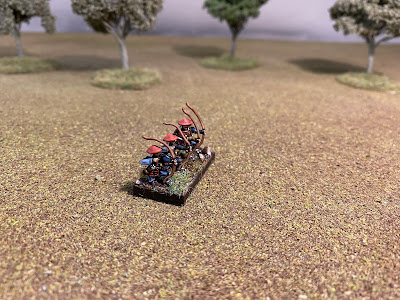 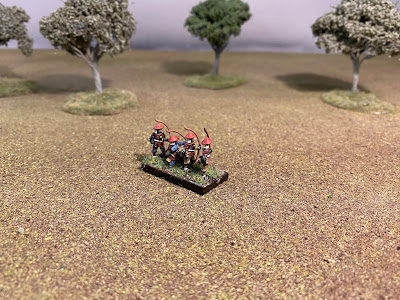 I purchased the pavises separately from Museum Miniatures. Quite a straightforward rendition of a pavise which were sometimes decorated but apparently often left unpainted when used by ashigaru: 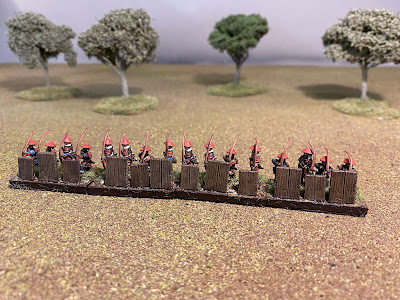 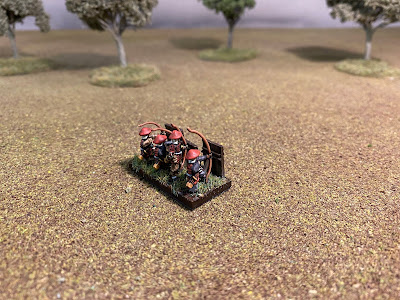 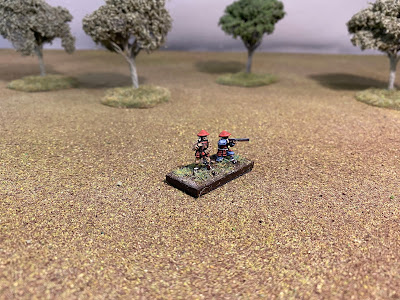 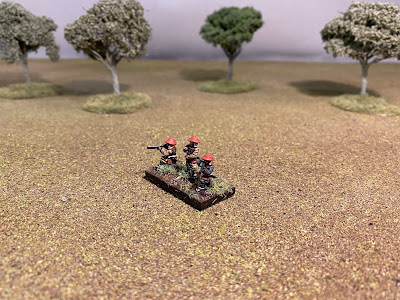 Another 71 figures achieved toward this project then, with completion now in sight: 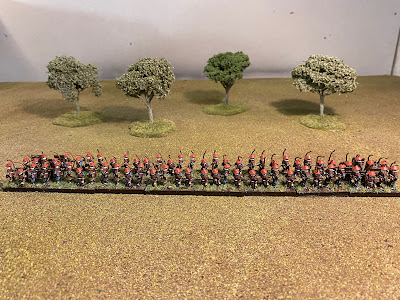 Next off the production line will be some baggage and camp figures. These contain a fair bit of variety so should be even more fun to paint.