As with many medieval armies a paucity of infantry can make them vulnerable against opponents who are better served in that department, so it is usually a good idea to take up all available options. In the case of the Teutonic list there is provision for eight elements of Livonian Foot, and up to ten elements of Prussian levy infantry: 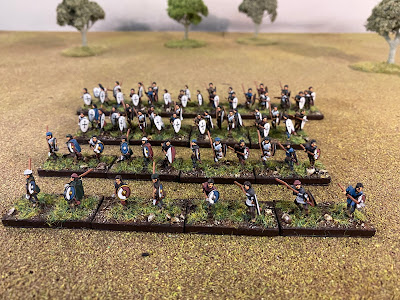 The Livonian foot are divided into four elements each of auxiliary infantry and lighter psiloi-type troops: 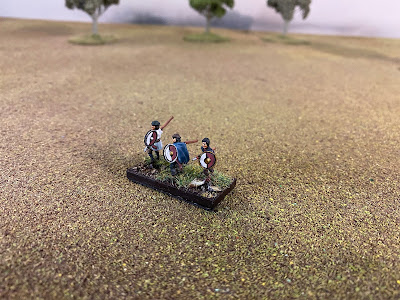 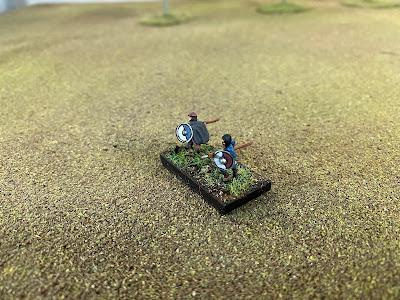 The Prussian levy infantry are potentially less useful being rated as 'horde', which means they will act as speed bumps or spend most of their time guarding baggage. I found I only had enough figures for nine elements but, in the unlikely event I choose to field all ten elements I'll no doubt borrow one from the recently completed Spanish army: 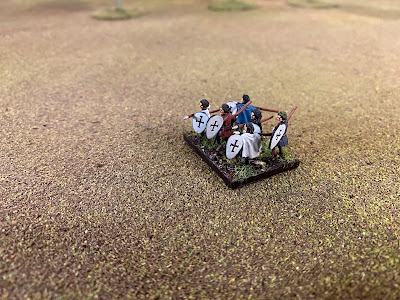 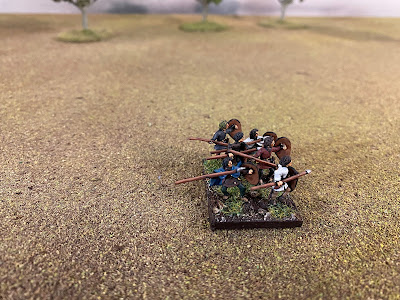 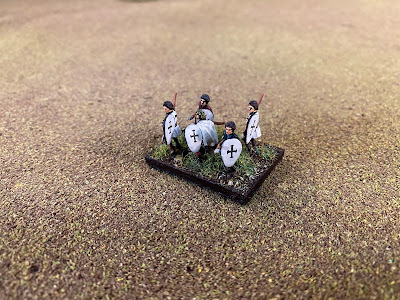 That is the Teutonic army essentially finished. Only a small army but I was quite pleased that I managed to plow through it in just over a month.

There is an option for some German allied knights which will be useful but which I will complete as part of a medieval German army next in the queue. I am planning to get stuck into it over the next few weeks before my motivation for 15mm medieval armies wanes, and in the meantime I'll assemble the Teutonic army for a group photo before they get stored away.

One of the problems with many medieval armies is the lack of cavalry. Plenty of knights, but generally not much of the lighter mounted troops. The Teutonic army list has an option for up to nine elements of Turkopolen light cavalry and four of knechte or "servant' cavalry, all of which I have completed to give myself a few more options: 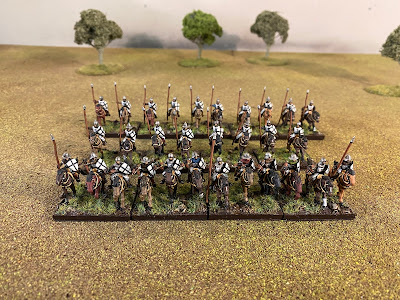 The knechte are crossbow-armed, with a couple armed with lances for variety. I'm not sure how effective just four elements will be especially as they are rated inferior, but am hopeful they will be useful in guarding flanks and plugging the odd gap if required: 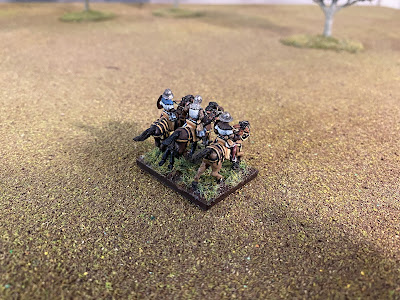 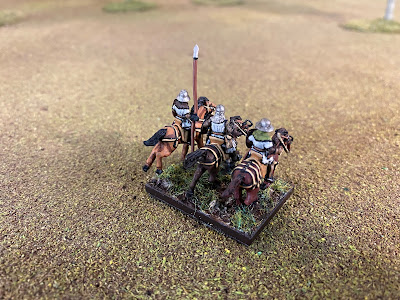 The Turkopolen are light horse and based with two per element, and will no doubt perform a similar function as the knechte albeit with a slightly reduced combat factor: 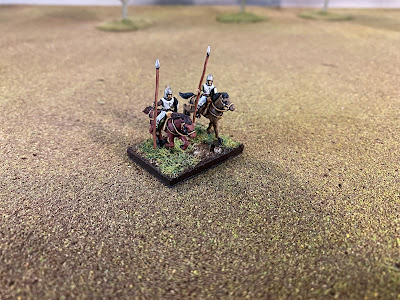 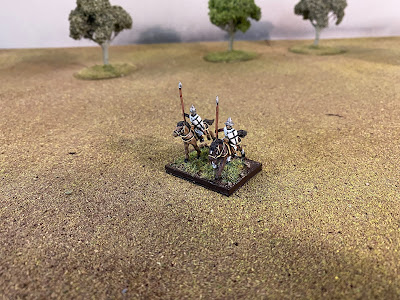 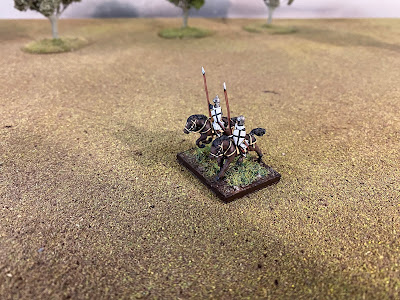 There is now just some Livonian foot and Prussian levy infantry to go and this small army will be completed: 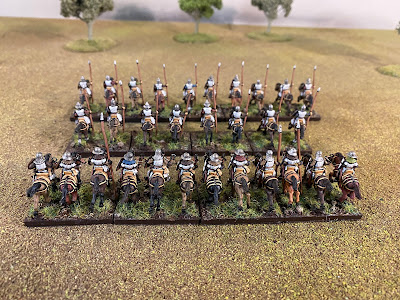 With any luck I should have them completed over the weekend, and then might assemble them for a quick parade.

These dienende bruder or 'serving brother' crossbow and spear form the main infantry component for the Teutonic army, with eight elements of the former and just four of the latter: 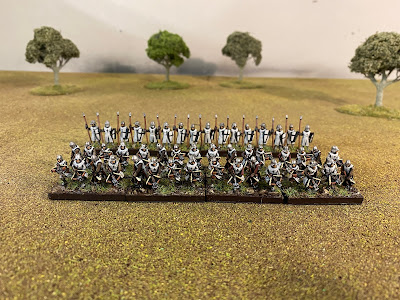 The Teutonic army is the medieval equivalent of Napoleonic Austrians, with lots of white: 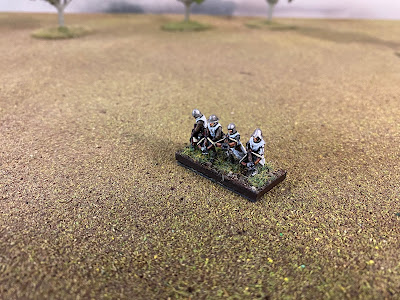 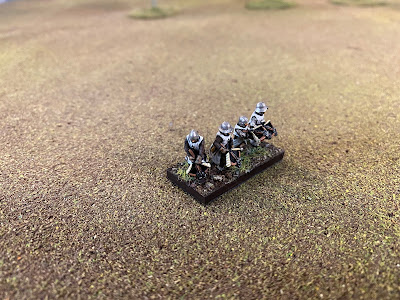 The figures are all from Khurasan, with separate four poses in each pack of crossbow and spear: 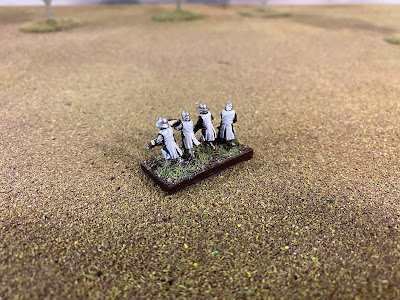 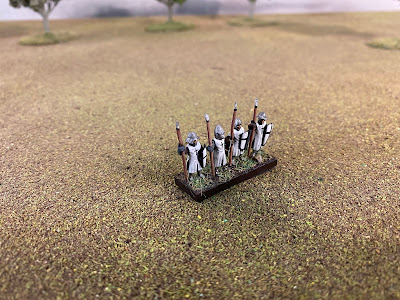 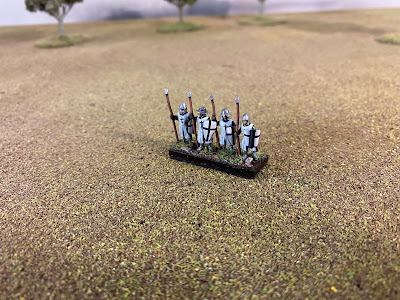 This puts me just over halfway through this project, with some cavalry and Prussian and Lithuanian infantry still to go: 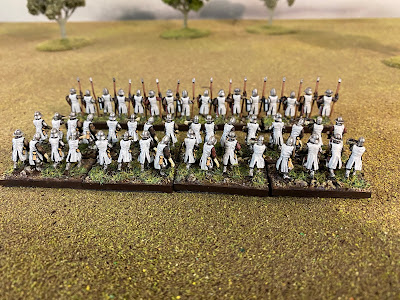 All being well I finally completed my law degree last night with the last exam on evidence, which should now theoretically free up even more time for painting in the evenings. This seems like a good idea in theory but I find I am often too tired to head downstairs at the end of the day, and much prefer getting in three or four hours on the brushes in the morning before work and when I am feeling fresh. This was why part-time study appealed as something I could do in the evenings as an alternative to watching television, but the novelty had started to wear off after seven years and I am now quite relieved to have completed it. At least I have a couple of hundred unread history books I can start to get stuck into, which will make a welcome change from reading criminal and contract law.

It is always enjoyable starting a new project and I have been looking forward to commencing a 15mm Teutonic army, starting with fourteen elements of knights: 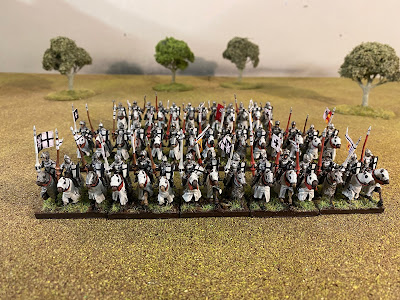 These are an expensive option in DBMM as they are rated superior and worth 15 points an element, and there is also an option to double-base them with German knights which takes them to a whopping 23 points an element. By comparison, most ordinary knights come in at 10 points an element and cavalry at 6 or 7 points, so it is quite easy to chew through the 400 point allocation in the games we normally play, at least apart from the time I had a brain fade and accidentally fielded a 500 point Frankish army which consequently went through the other side like a knife through butter, and which I still get frequently reminded about: 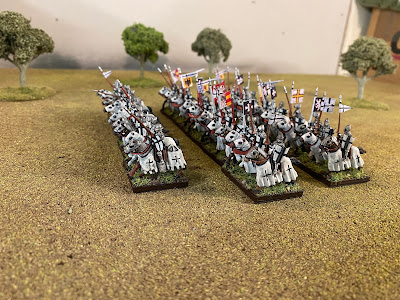 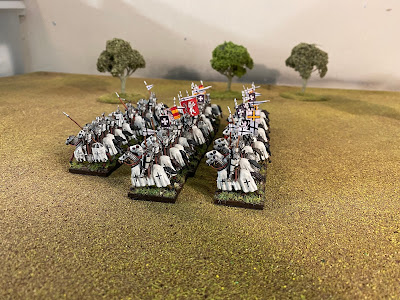 I decided therefore to base them as single 15 point elements, but will be making some sabot bases to add the German cavalry if I ever feel like straying into 23 point per element territory: 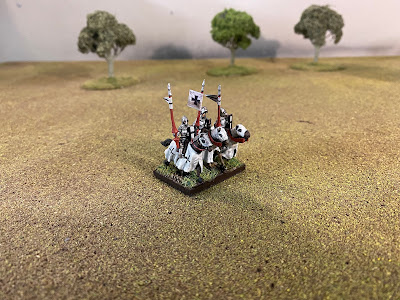 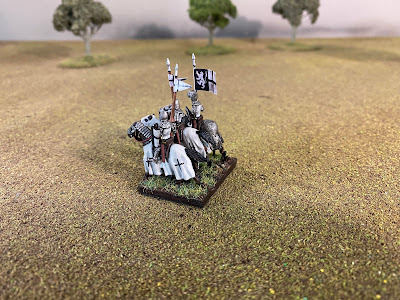 The figures are from Khurasan and are true 15mm, which puts them on the smaller side of figures. The banners are from Little Big Men Studios and, while medieval banners are large anyway, I found I was limited in what I could use from the banner sheet, as lance pennons at least: 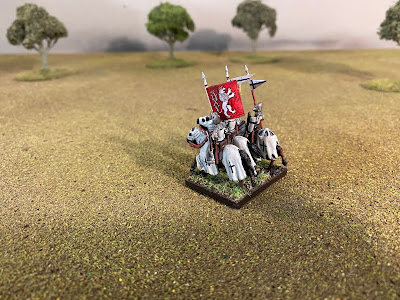 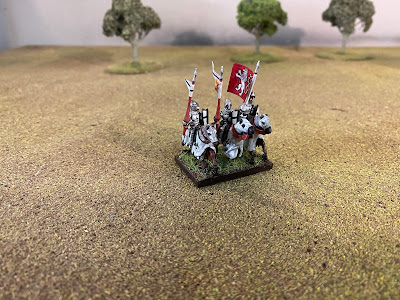 There are also four command elements among the fourteen, with generals worth 35 points each or 43 points if double-based: 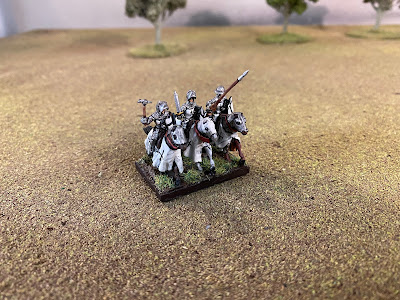 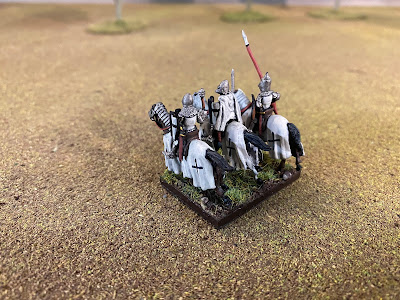 The upshot of this is that the Teutonic army will be a small and hopefully quick project: 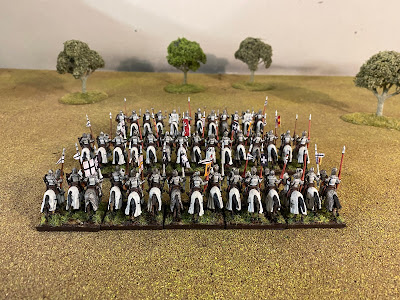 Next up will be some twelve elements Dienende Bruder crossbow and spearmen, which will form the backbone of the foot for this army.
Posted by Lawrence H at 14:27 14 comments: