Swiss and Irish in Spanish Service

Amongst my favourite Napoleonic regiments, I have completed three Swiss battalions in Spanish service - Reding, Betschart and Preux: 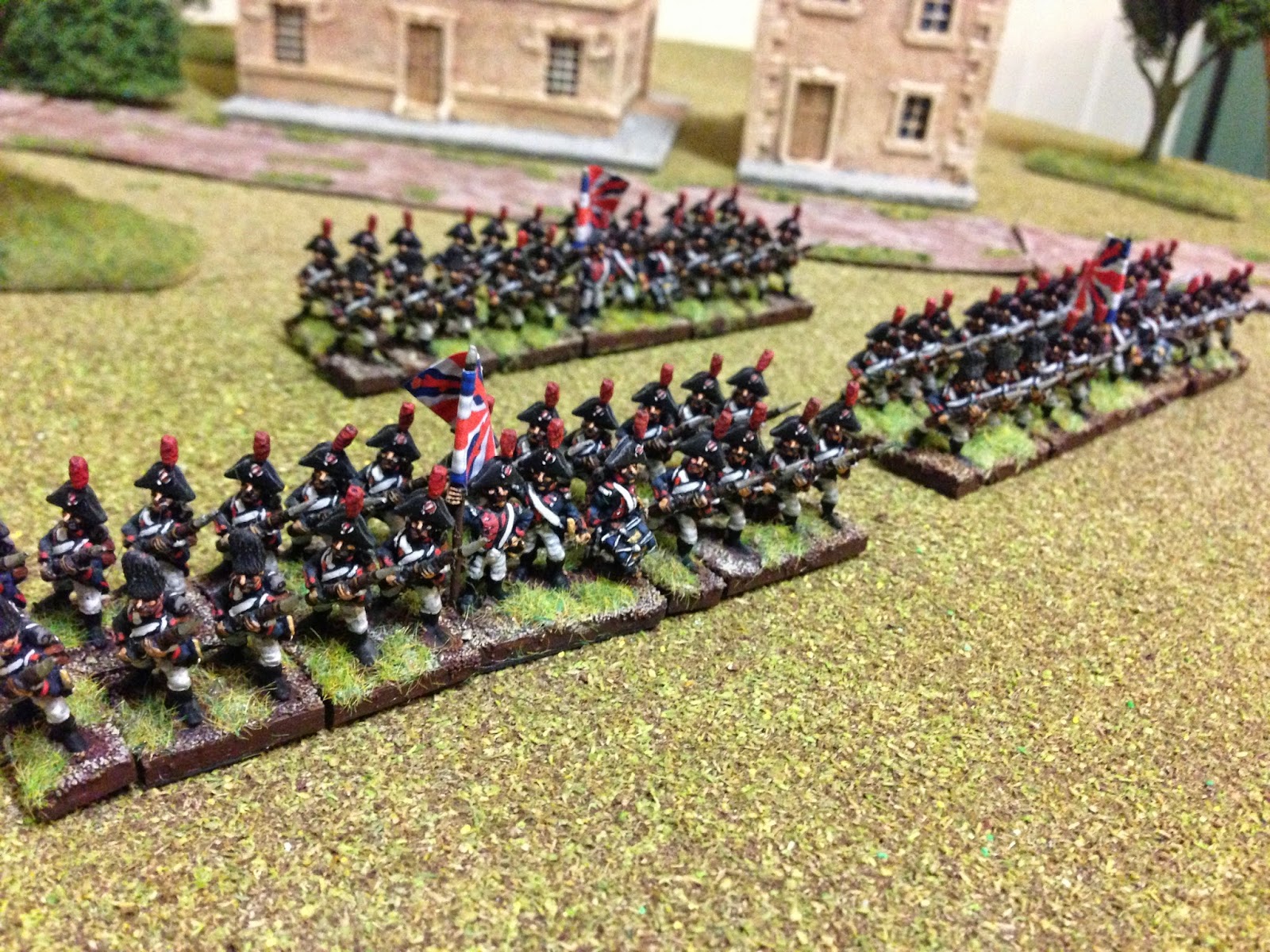 This is possibly where the lack of variety in some of the older Essex Miniature 15mm range is highlighted, in that there isn't a figure with the longer tails of the guard, and there are really only the two poses of the line. This is in direct contrast to their Portuguese for example, where each bag can contain six different poses across eight figures. That said, this is 15mm so I suppose the object is to put as much on the table as possible, and the detail is still just as crisp on these as later figures: 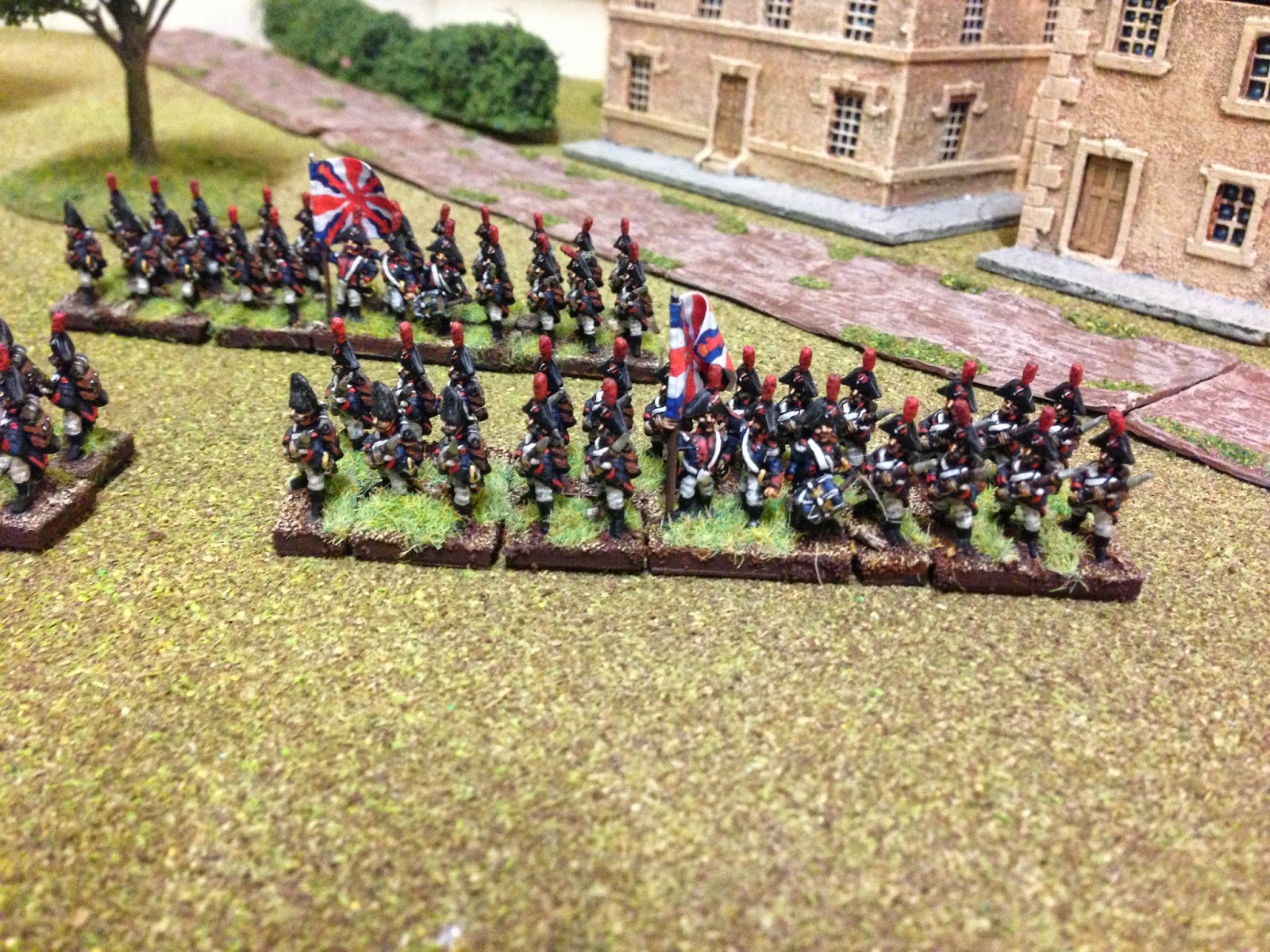 I have only managed one Irish unit in 15mm, but am quite happy with them all the same: 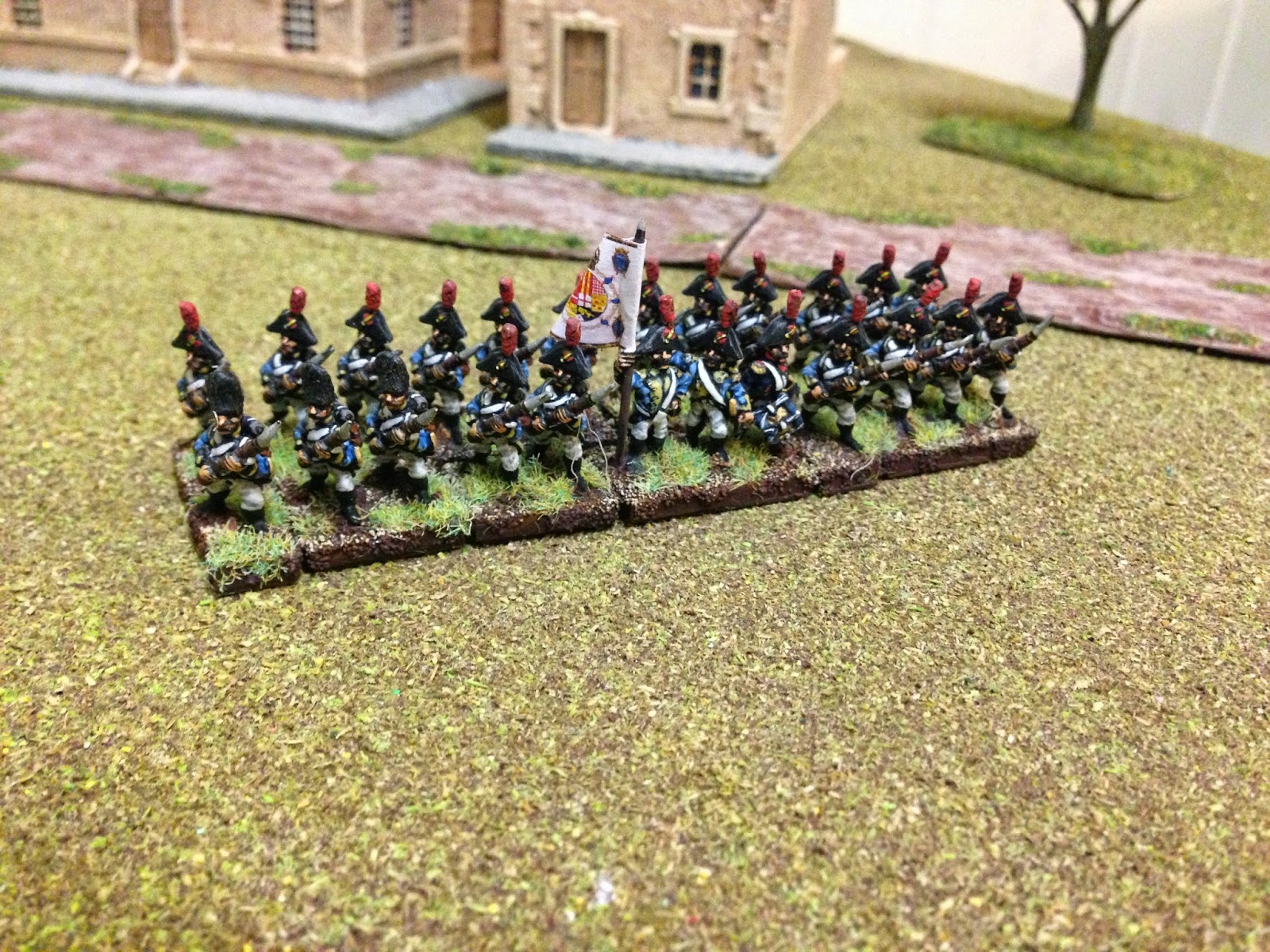 Another of my favourite Napoleonic uniforms, with a combination of colour that really stands out on the table: 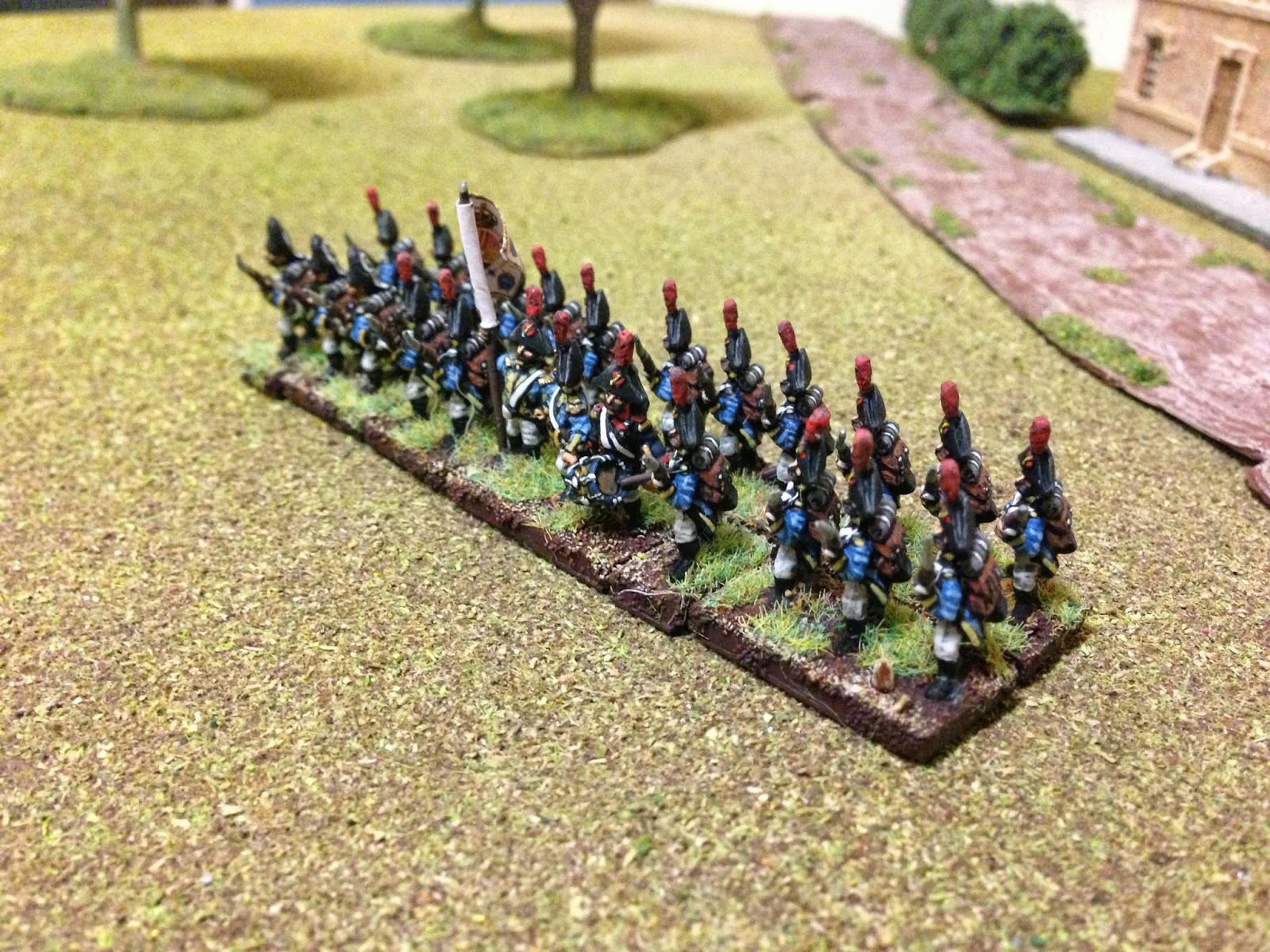 Now to affix the flags on some converged grenadier units...
Posted by Lawrence H at 03:52 5 comments:

I finally completed the General Staff for my Spanish over the past week. The personality figures and some of the ADCs are by Warmodelling Miniatures of Spain, while the foot and general cavalry figures are Essex Miniatures 15mm.

I think the two mix reasonably well, although the Warmodelling miniatures are much slighter. I certainly found myself struggling with them a little more than the Essex at this scale, mainly because I couldn't find the necessary and obvious detail I need more nowadays, although to be fair it was probably there but I may have been unable to realise it: 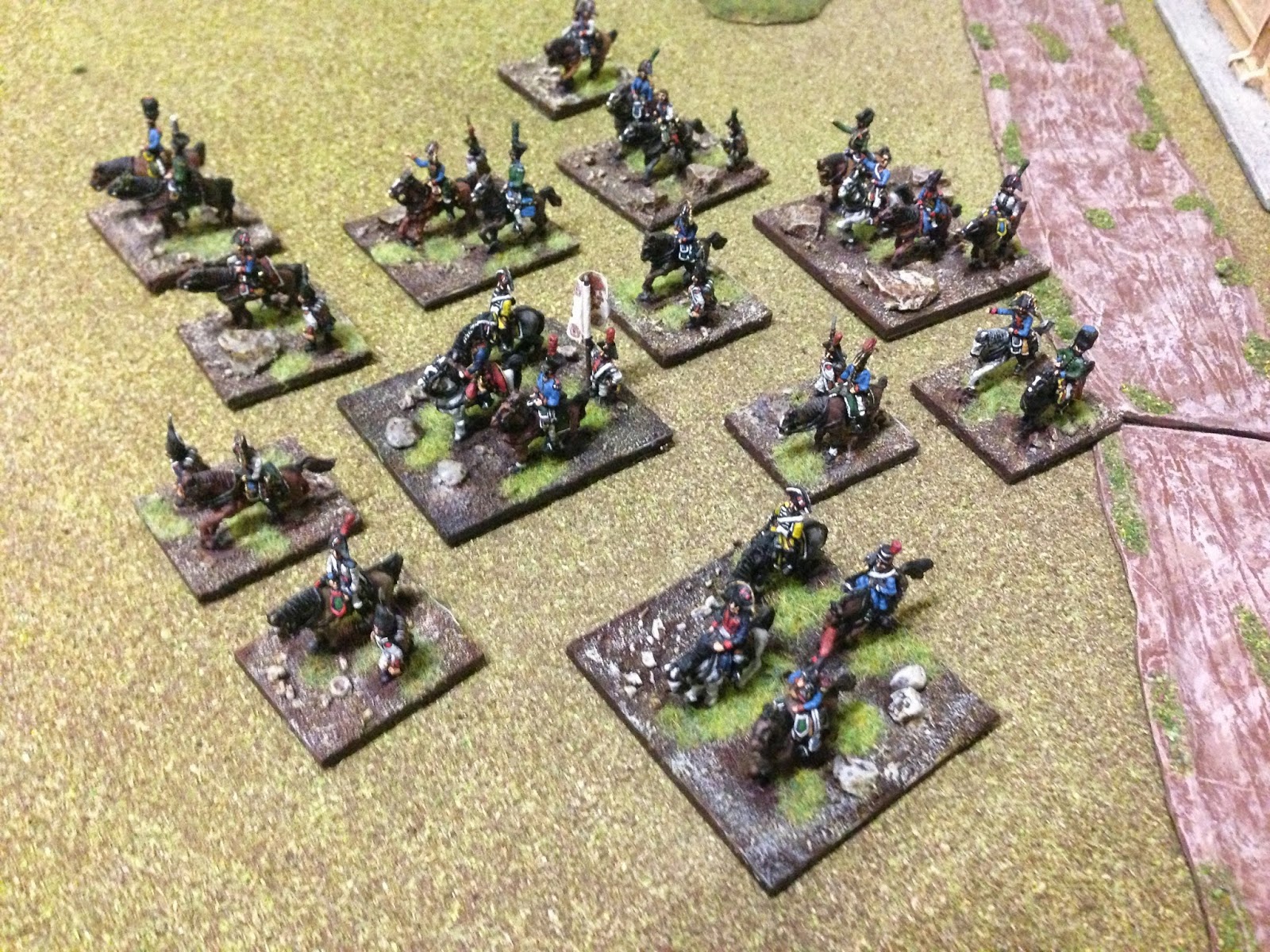 There is quite a range of personalities to choose from, and I purchased one of each, even though most of them didn't actually serve together in the same theater. I made General Gregorio Garcia de la Cuesta the overall Commander-in-Chief: Along with Jose Pascual de Zayas, who was probably the most competent Spanish commander of the war, as evidenced by the additional training he put his troops through prior to Albuera which enabled them to perform so admirably: 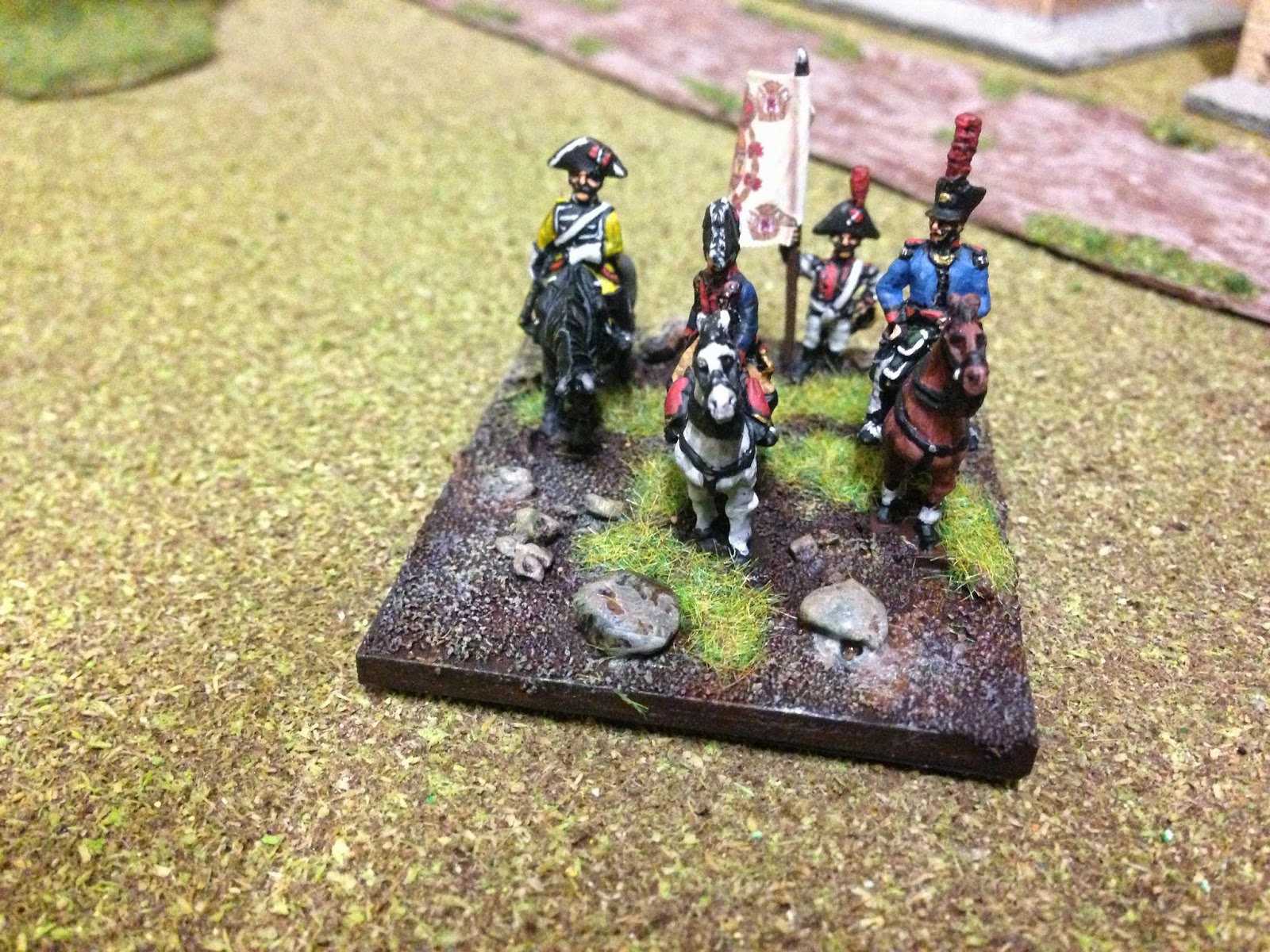 Don Pedro Caro y Sureda, better know as the Marquis de la Romana who effectively covered the retreat of Sir John Moore before "melting" away into the hills after the British had embarked at Corunna, and with whom Wellington worked quite effectively until Romana's death in early 2011: 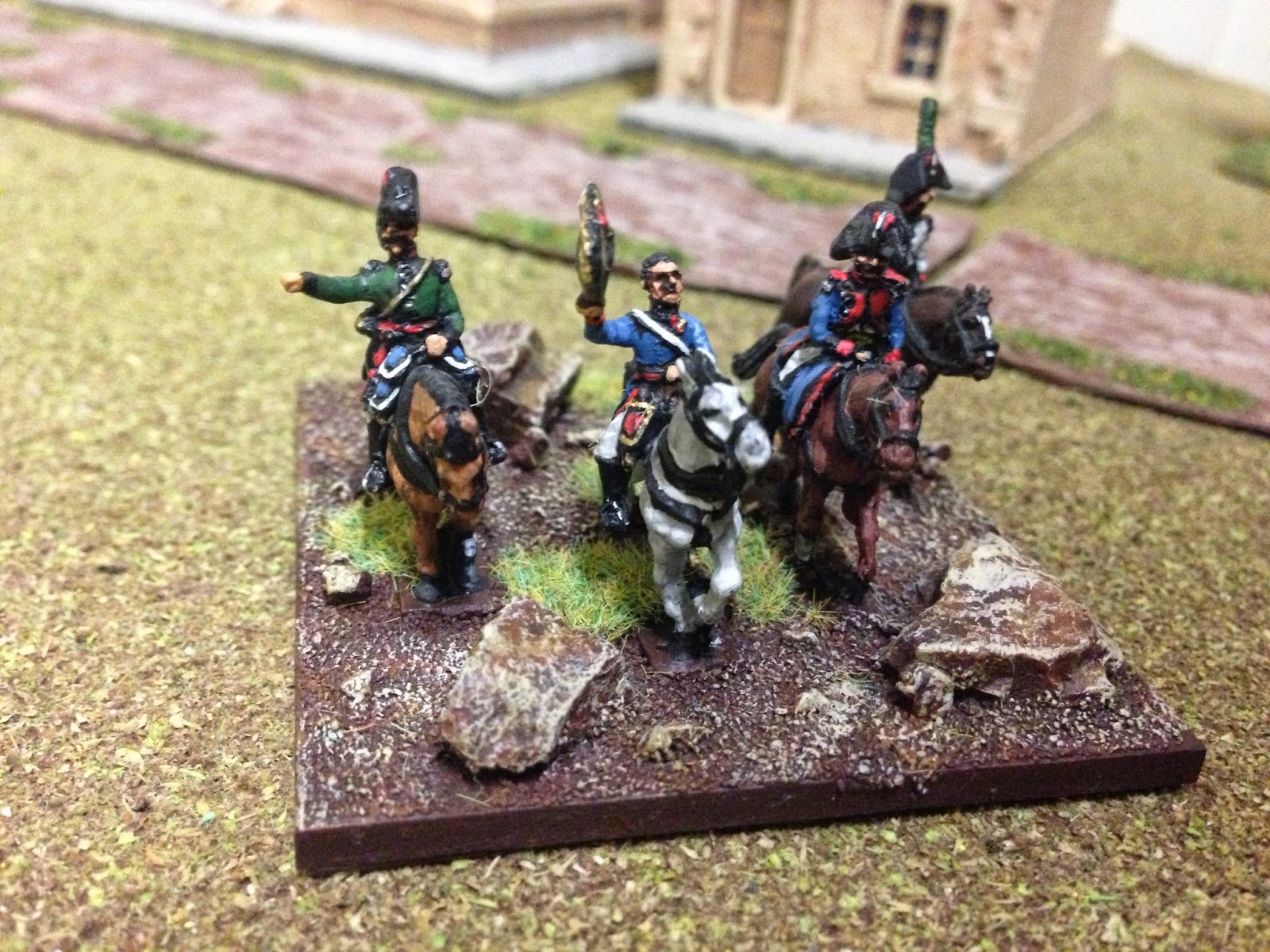 That's the generals and staff finally completed. A few more pictures of Swiss and my favourite regiment, the Irlanda, to be posted now.

I have probably overdone the overall number of these and am not sure when they could actually all see the field of battle, but at least I am fairly confident now that I won't run short: 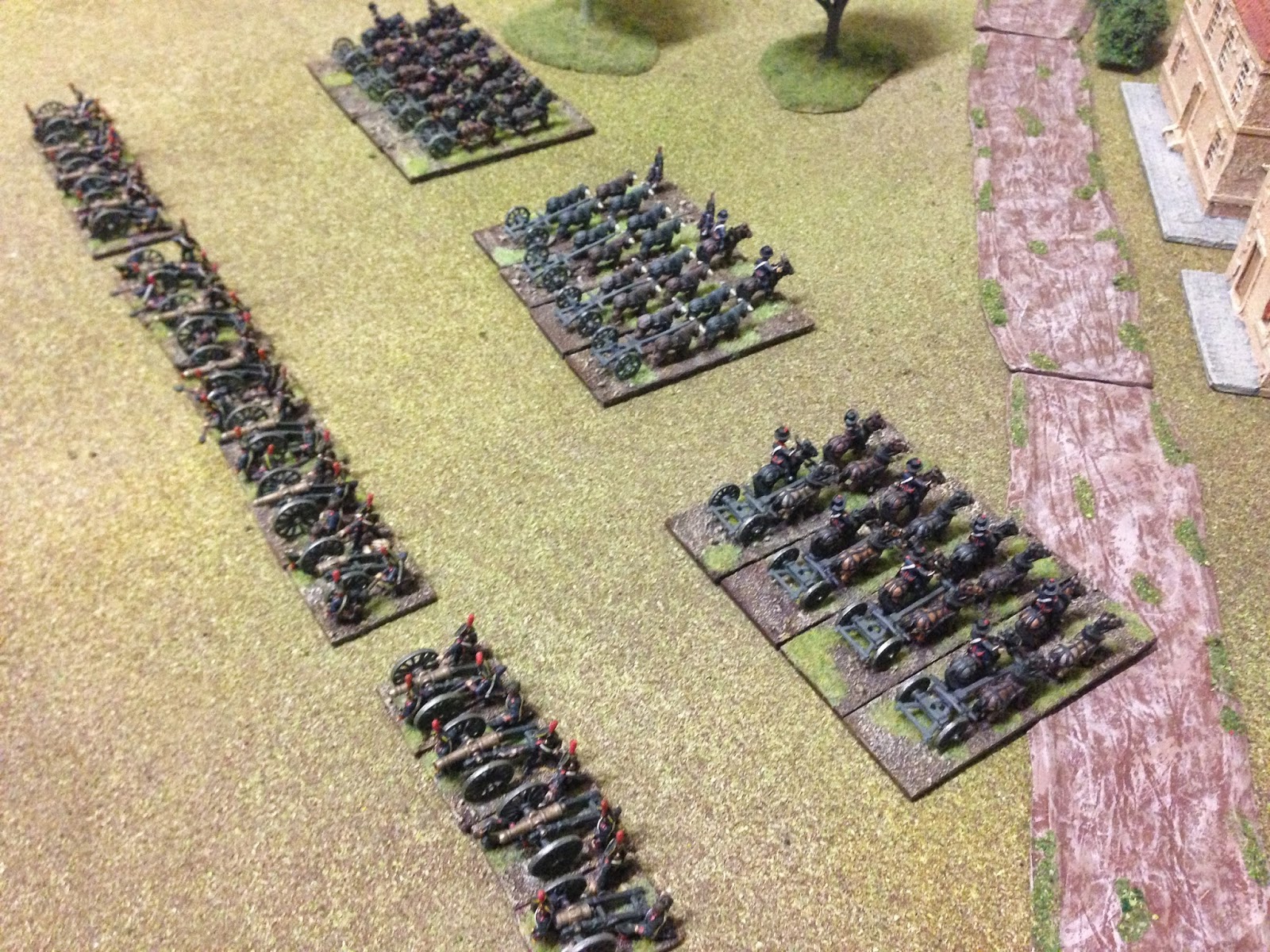 I quite like the Essex 15mm equipment and they have a fairly rounded range to choose from. There is also some variety among the artillery figures - enough to have kept me interested, at least: 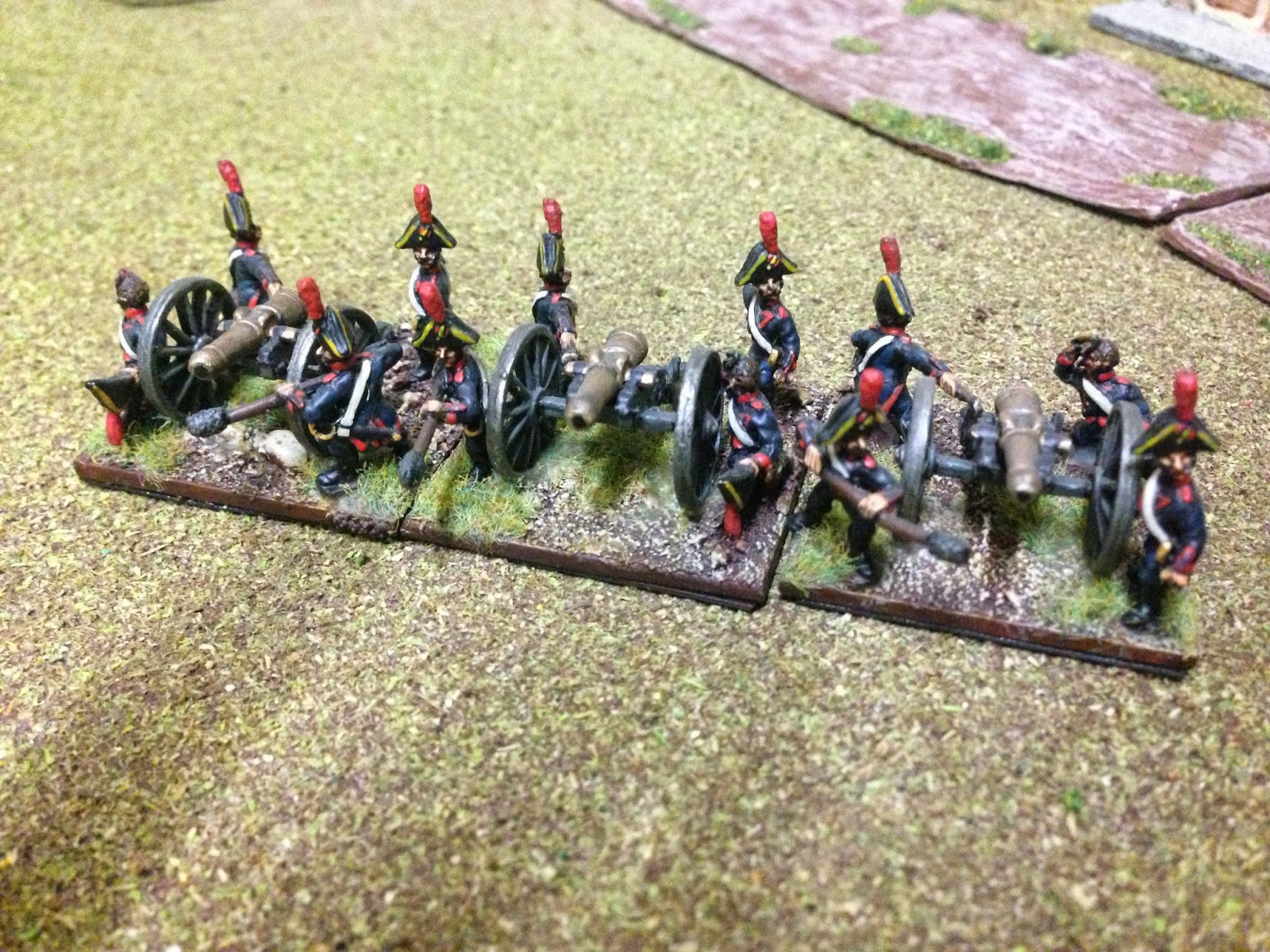 The only thing lacking were appropriate limber figures, but I threw some Essex renaissance ox-drawn limbers together with some spare figures which I hope look the part. These don't take a big part in the battles we play, but I wanted to include them more for the sake of completion than anything else: 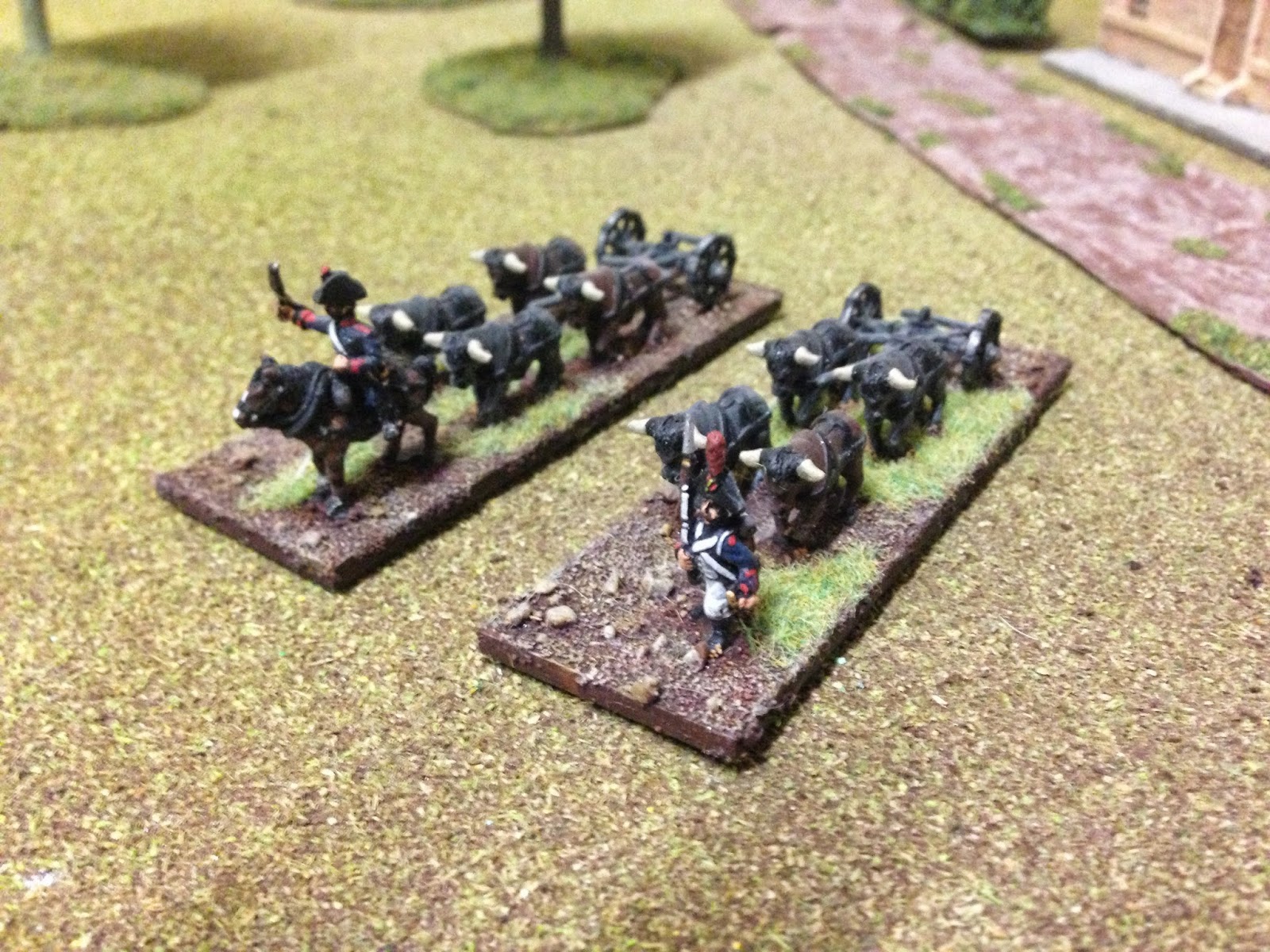 I'm not overly sure that I managed to capture the faded cobalt-blue of the Spanish artillery pieces as well as (I like to think) I did in 28mm, but they were a lot of fun to put together.
Posted by Lawrence H at 06:21 2 comments:

The last of the cavalry for my 15mm Spanish army, here are three regiments of Spanish Heavy cavalry: 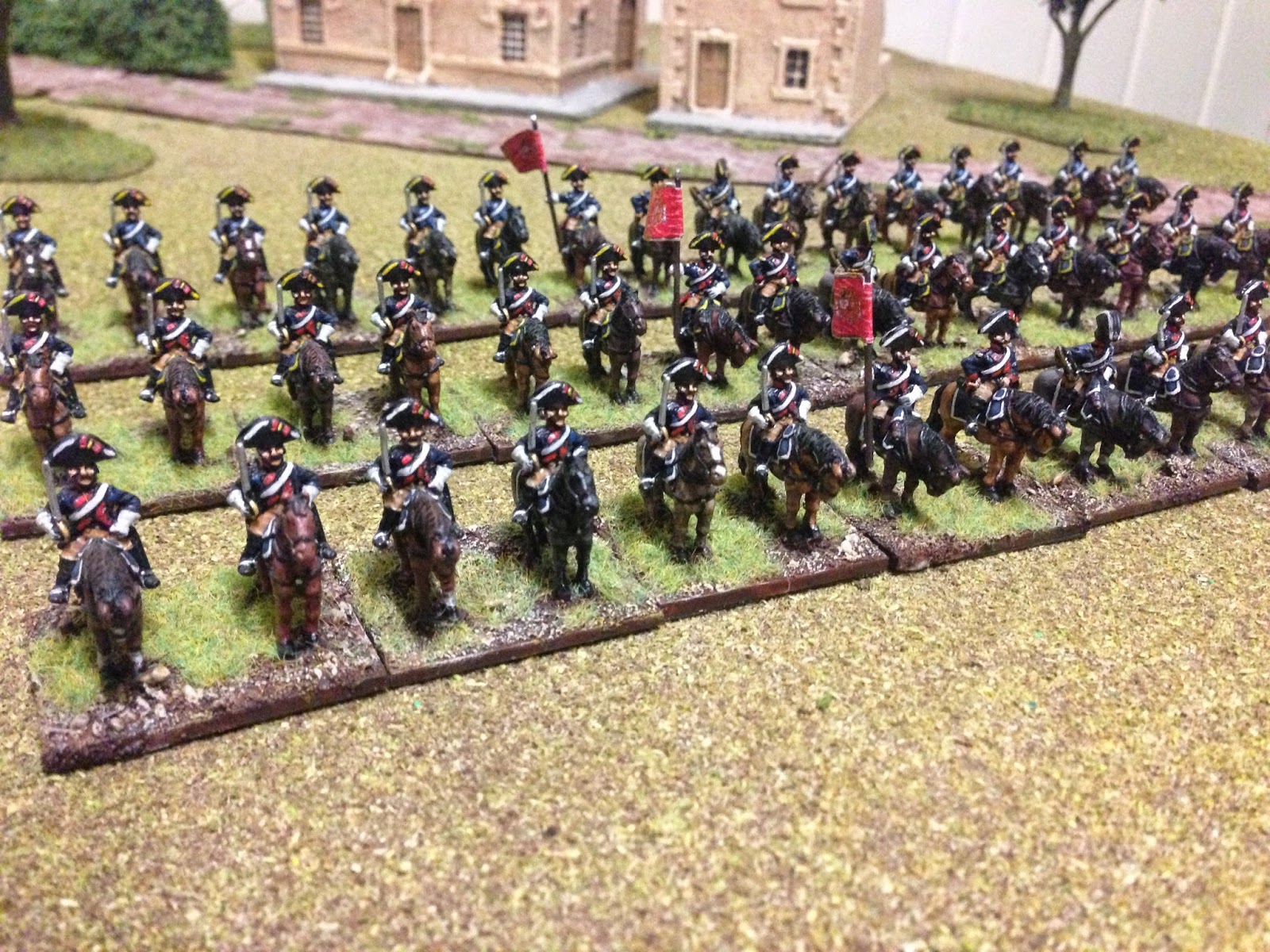 These represent the Principe, Rey and Reina heavy cavalry regiments (from front to rear) of sixteen figures each: 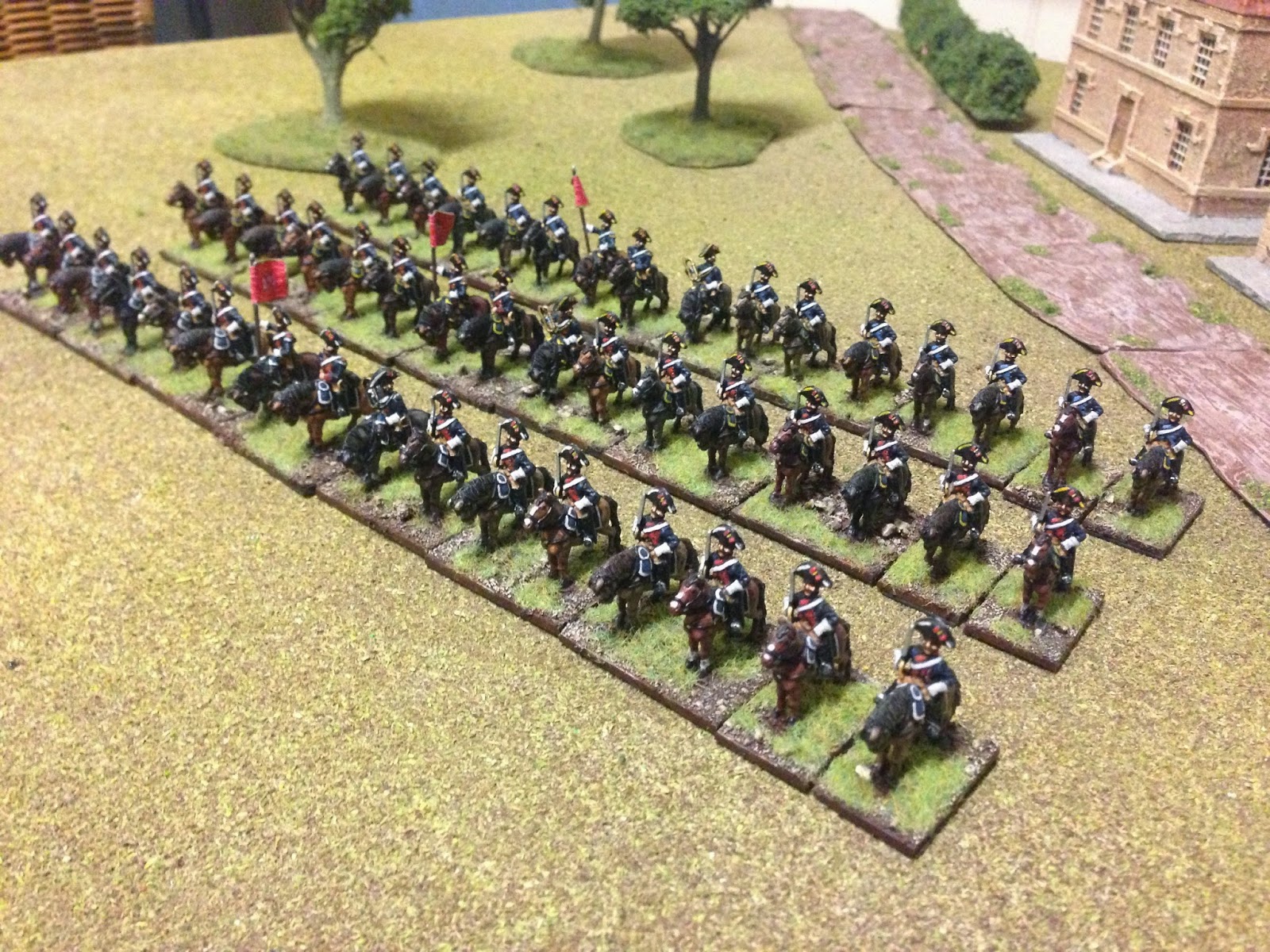 The figures are all Essex, with Maverick Models cavalry standards.
Posted by Lawrence H at 05:47 2 comments: This is one of my favourite Napoleonic cavalry uniforms, and the colour seems to work well on 15mm figures. I would be surprised if the Spanish lights actually did carry a standard in battle, but the command set came with a standard bearer and I always think they add a little bit to a unit if you can use them: 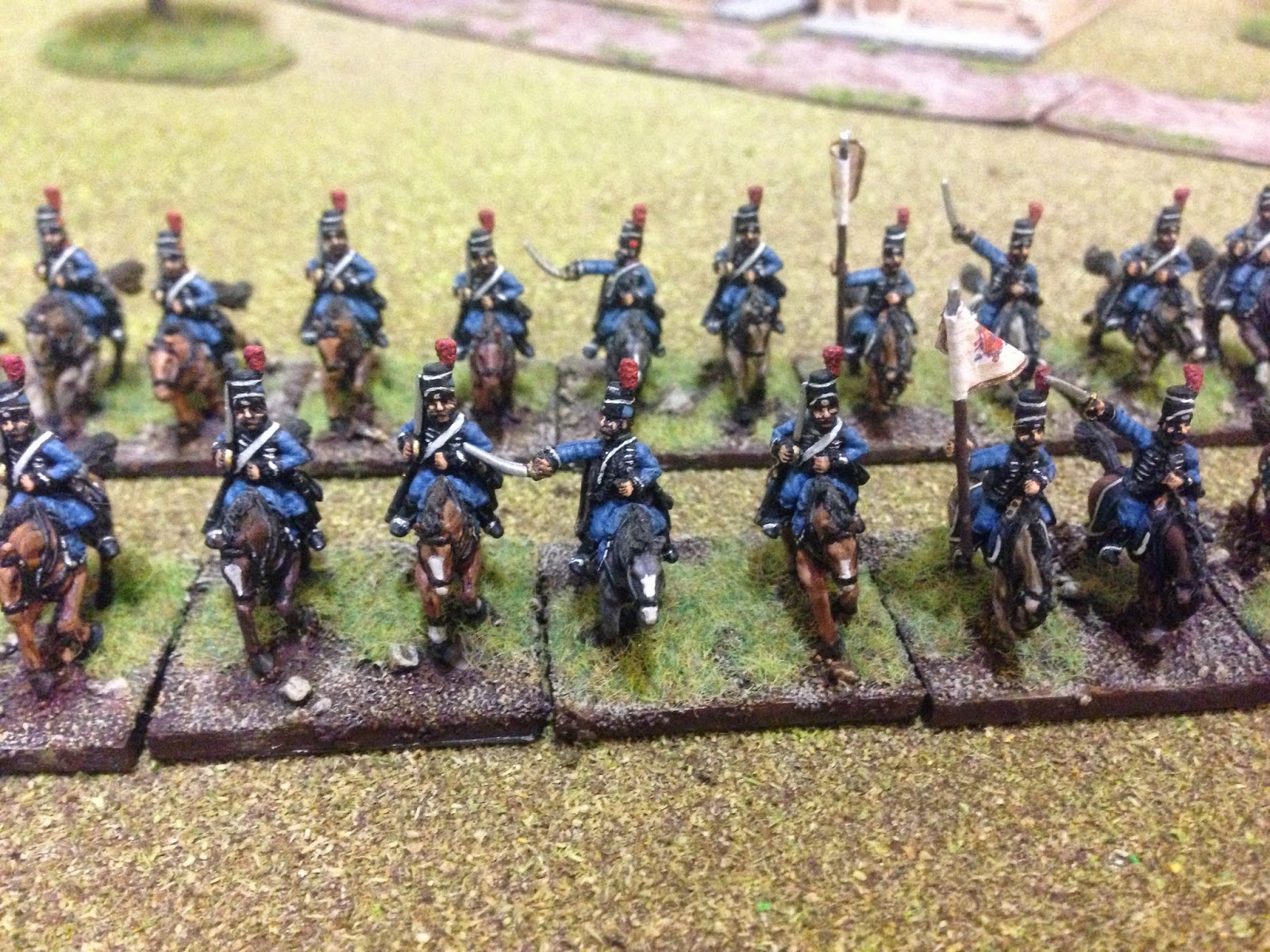 I also managed to finalise two units of Chasseurs or Cazadores in the Olivenza and Voluntarios de Espana regiments: 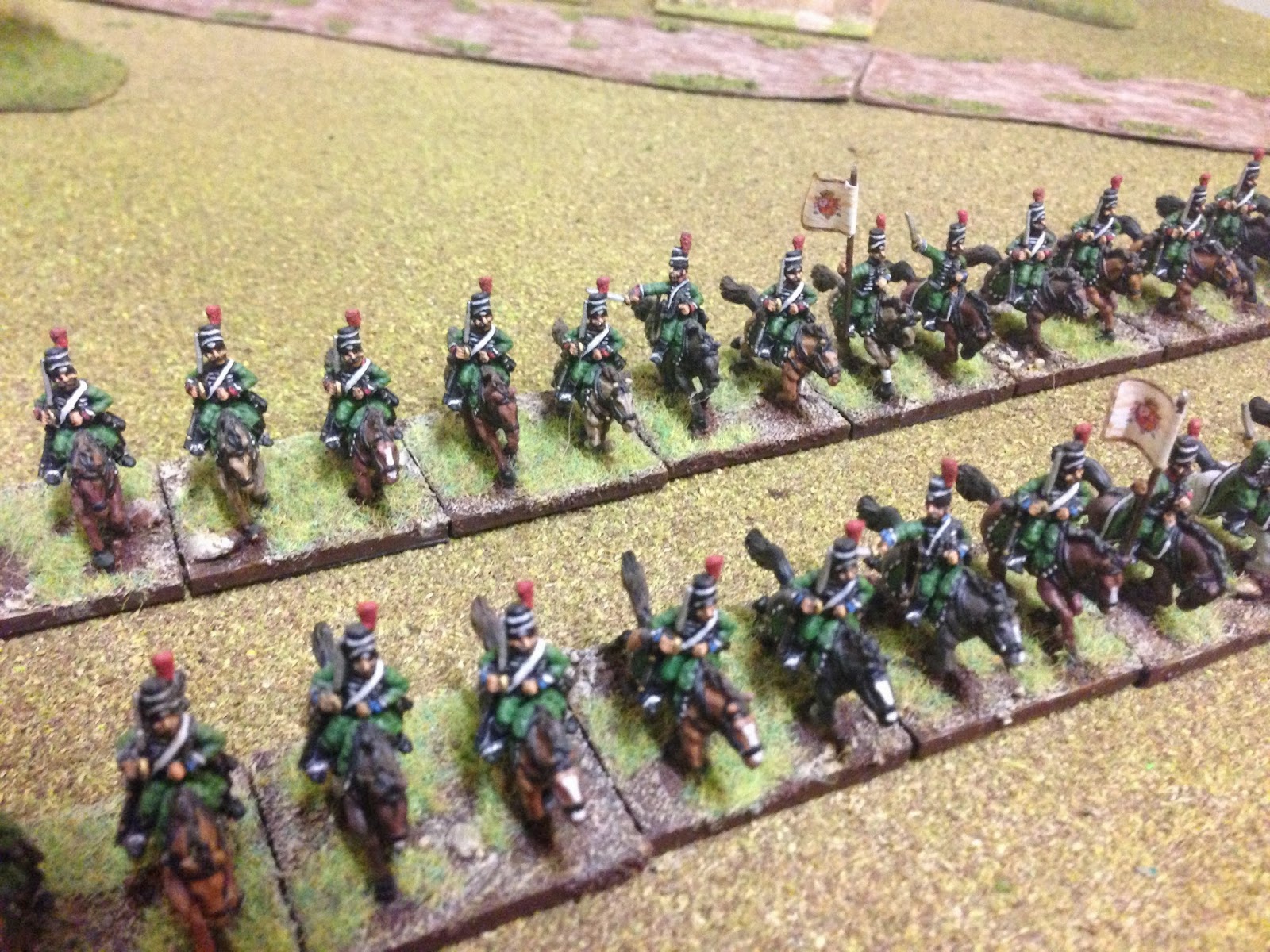 Essex miniatures are not to everyone's liking, but I have to say that I do have a very soft spot for them. I have found the castings to be generally very clean and, while they are a "true" 15mm, and as such stand shorter than other figures such as AB, there is enough detail on them to provide a decent result. 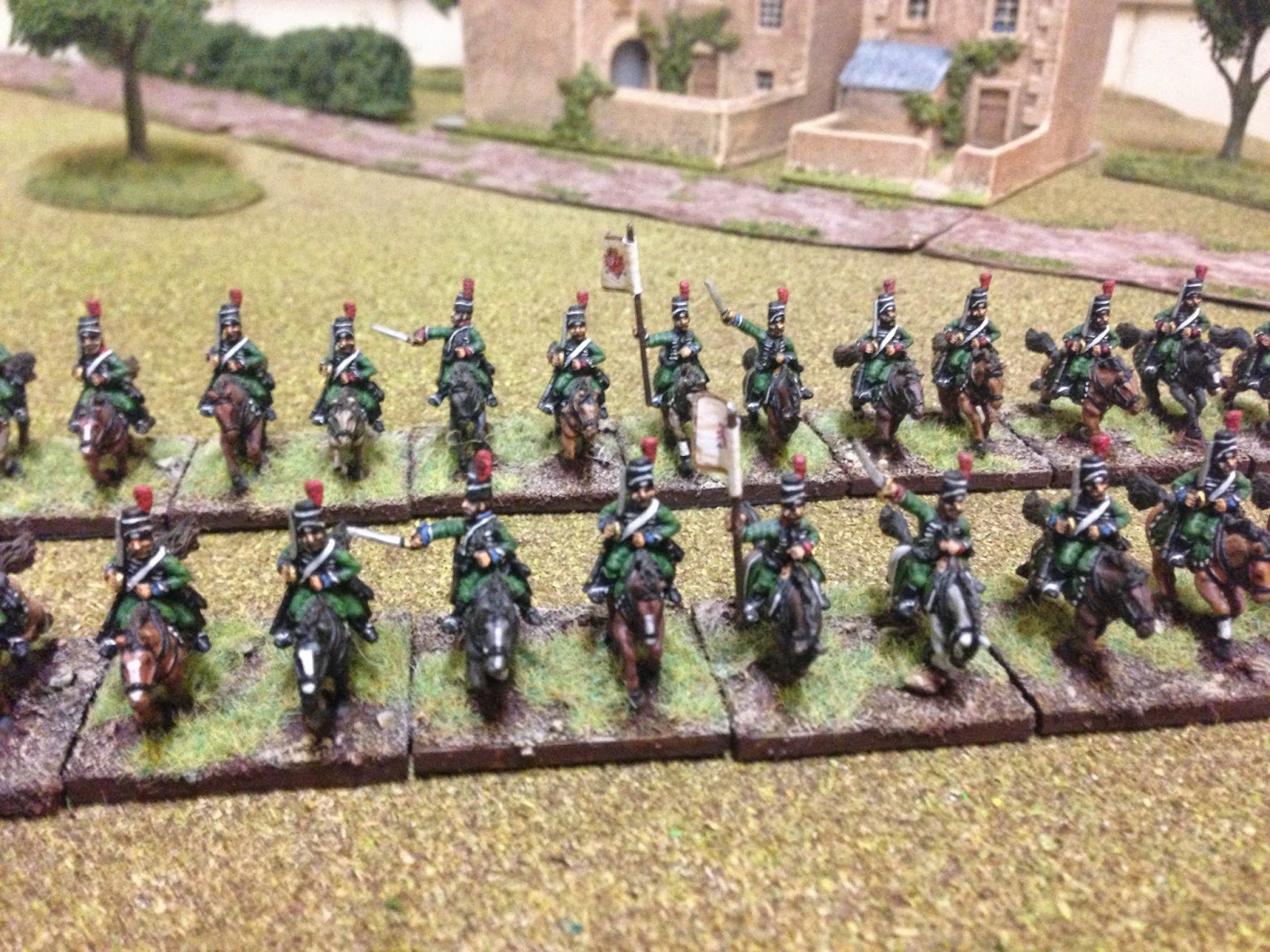 It has been a little while since I finished painting these, but managed to get the standards attached over the past weekend which means that all five regiments are now complete. The figures are Essex 15mm miniatures, part of a large stash I built up when I lived in the UK for two years back in the early 2000's, and the standards are from Maverick Models. Yellow is never the easiest colour on 28mm figures in my experience, but seemed almost enjoyable in 15mm: 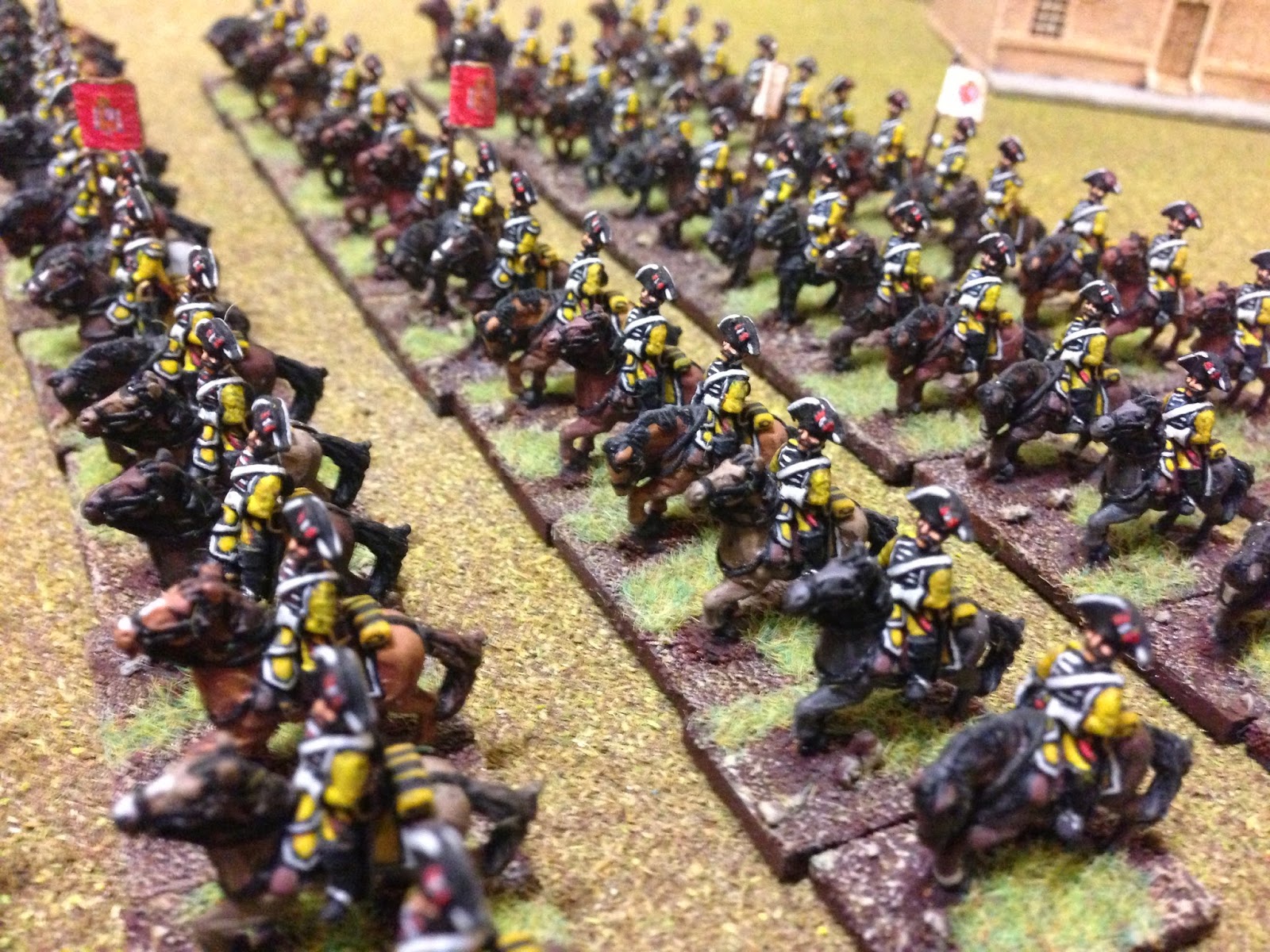 The five units are the Rey, Reina, Pavia, Almansa and Numancia regiments with 16 figures per unit which, at the 1:40 figure ratio we use, represents a paper strength of 640 men per regiment. 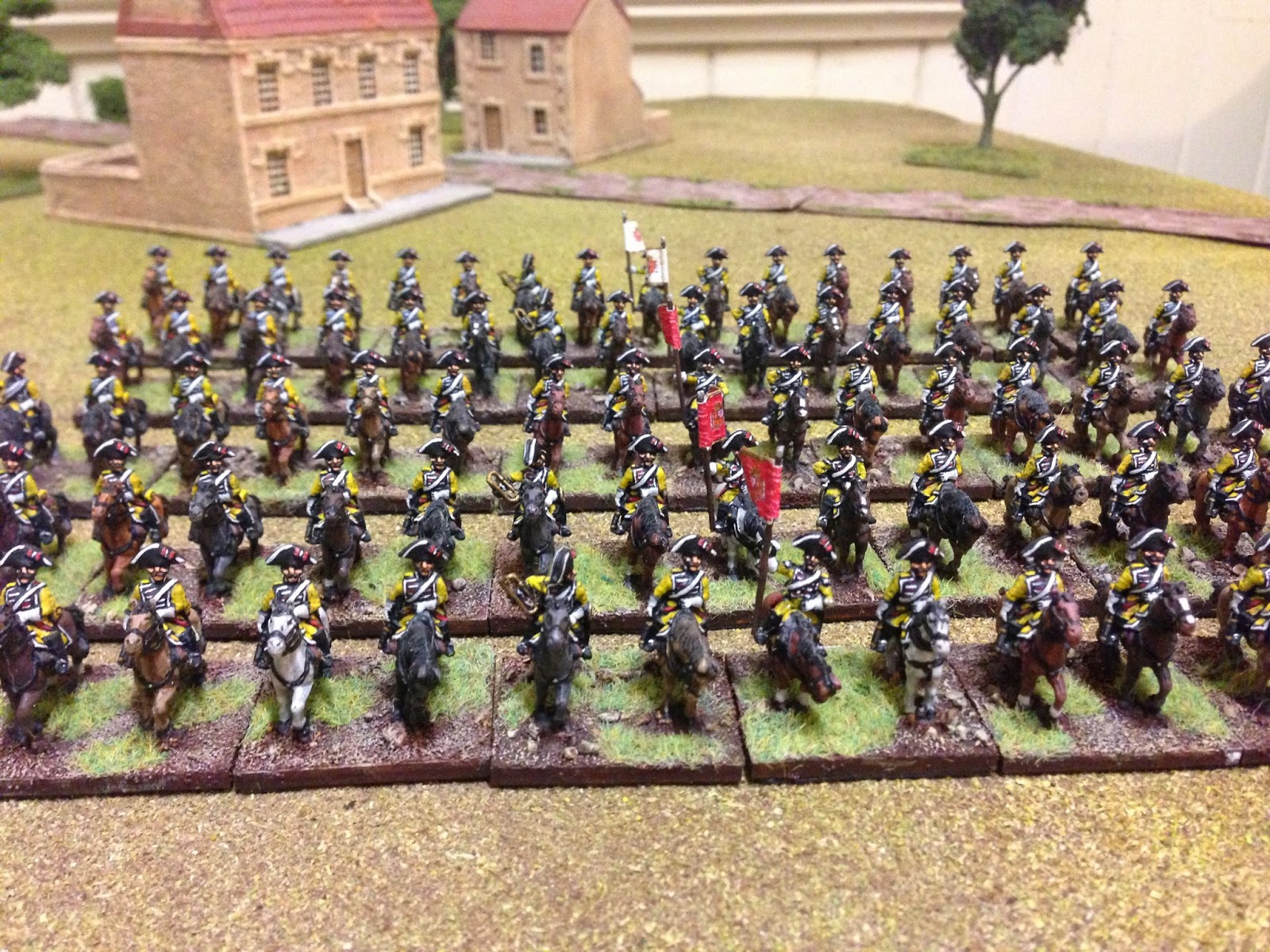 Not that we will ever probably use them at full strength, and it will be an unusual battle where we would use all five regiments, but they are available nevertheless should we need them for a future campaign. 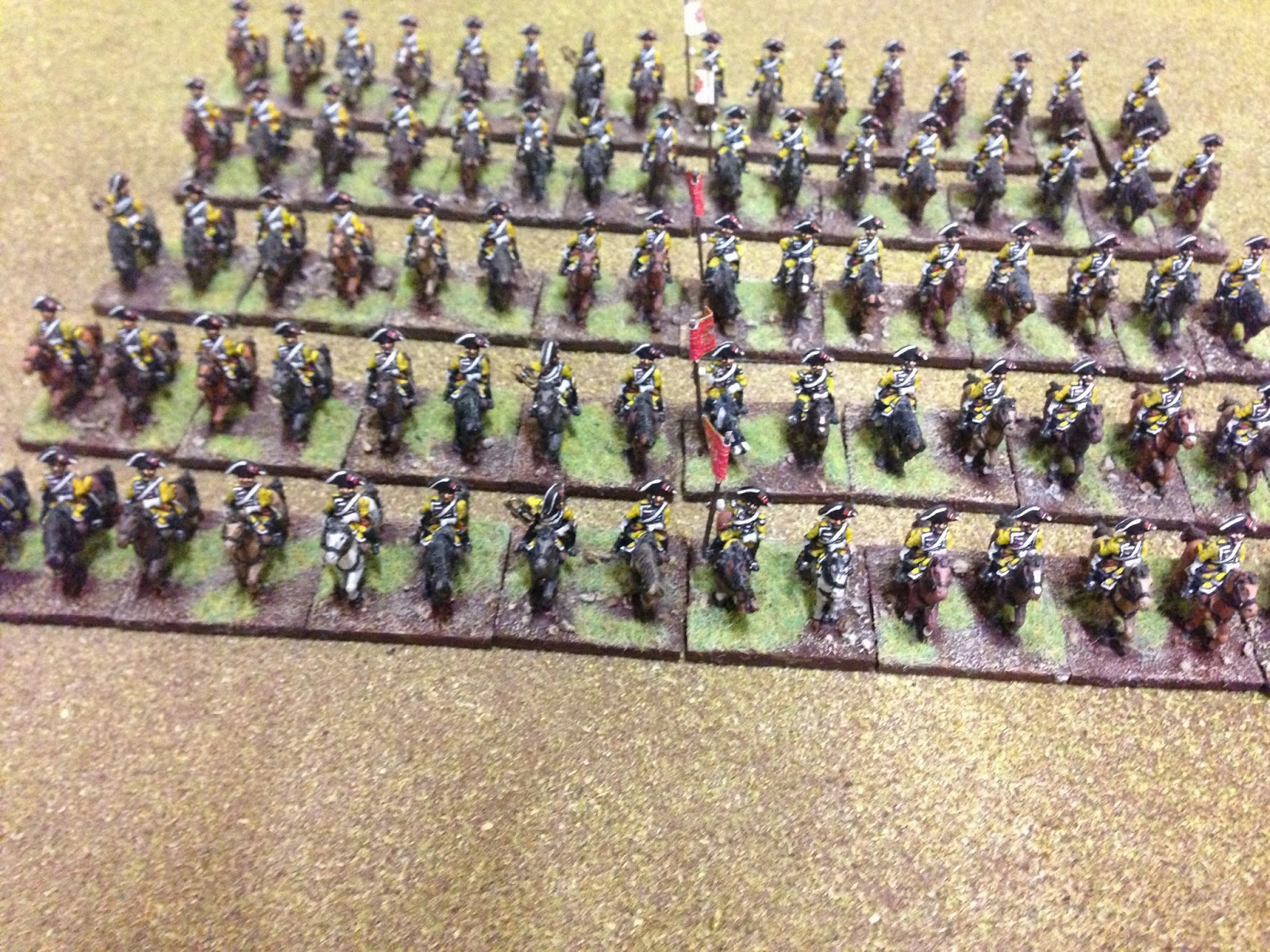 I also managed to complete four Spanish light and heavy cavalry regiments, and will post them separately over the coming week or so.