The 4th Cacadores, as with most of the Cacadore regiments, were heavily engaged throughout the Peninsular War and saw action under Pack at Bussaco, Salamanca and Vittoria, and as part of Wilson's brigade under Hamilton at the Battle of the Nivelle. They were also present as part of Campbell's brigade at the battle of the Nive: 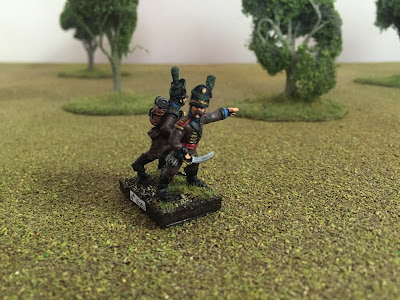 The uniform and facings are almost identical to the 1st Cacadores, except that the 4th had a sky-blue collar as opposed to brown: 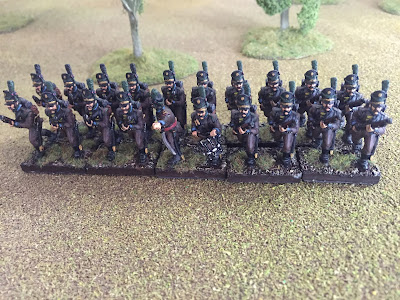 As with all Cacadore regiments around this time, the elite atirador companies were distinguished by black shako plumes, and  green fringes on the end of the shoulder straps, and were armed with the legendary Baker rifle: 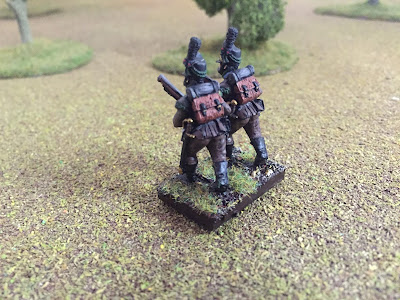 I have four more of the early Cacador regiments to complete, which will leave me with a seventh. I'm probably going to have a go at painting them as a battalion of the Loyal Lusitanian Legion to provide a bit of variety, but that is probably a month or two away.
Posted by Lawrence H at 01:09 8 comments:

The first and possibly most highly regarded of the Cacadore regiments alongside the 3rd, the 1st Cacadores were present at most significant Peninsular War battles aside from Albuera. This included being part of the Light Division under Craufurd at Bussaco and Fuentes de Onoro, under the command of Alten at Salamanca and Vittoria, and present at most of the conflicts in the crossing of the Pyrenees and into France including the battle of the Nivelle and the series of encounters which formed the battle of the Nive: 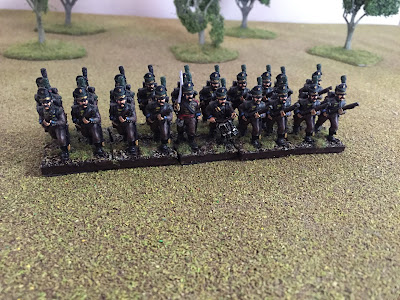 I had a slight conceptual struggle with this unit before I began, in that most Portuguese Cacadores around the 1808 to 1809 period are represented with the barretina and with yellow lace, but Chartrand states that this was only a very short-lived phenomenon and that most very quickly adopted black, due to cost and availability, and possibly because it was quite conspicuous. This implied that Cacadores wore black lace with the barretina, even before the later adoption of the stovepipe shako: 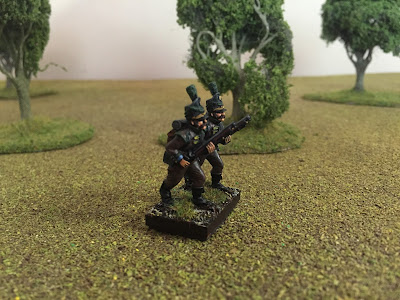 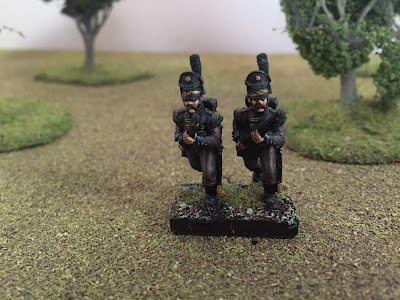 In the end though I went with the yellow lace, with gold for the officers, on the basis that this is what is typically represented on the early Cacadores and therefore probably more recognisable: 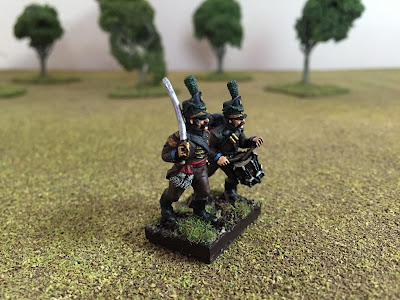 I have figures for all six of the earlier cacadore regiments, and hope to have the remaining five completed this side of Christmas, in addition to some spares that might be enough to make up a seventh: 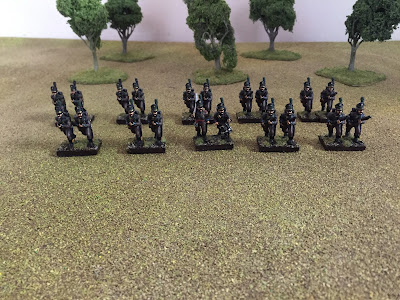