Another two battalions completed, this time the 40th Line Regiment: 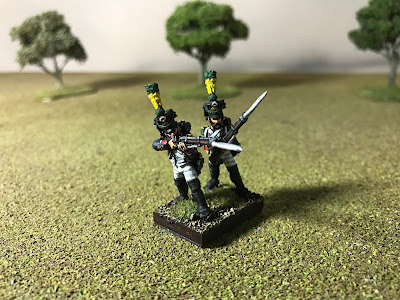 These were also present along with the 34th at Arroyo dos Molinos where they suffered heavy casualties, and were similarly brigaded with them at Albuera and much later in defending the crossing of the Nivelle. 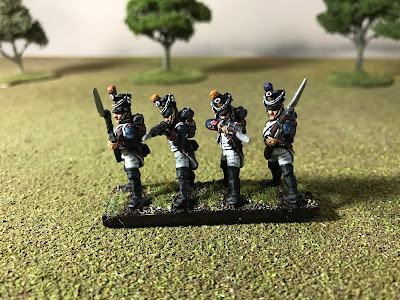 I have used a mixture of the Foundry French firing, loading, and "at the ready" figures in an attempt to give the impression of a unit that is engaged with the enemy: 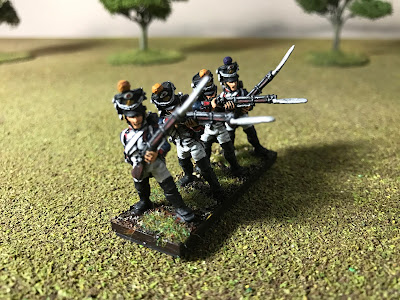 One problem I have found with the Foundry figures is that the eagle standard was too small to accommodate a GMB flag, so ordered some eagles and poles from Front Rank. This is their standard pole which looks just fine on my Front Rank figures, but perhaps could have done with a trim for the slightly smaller Foundry French: 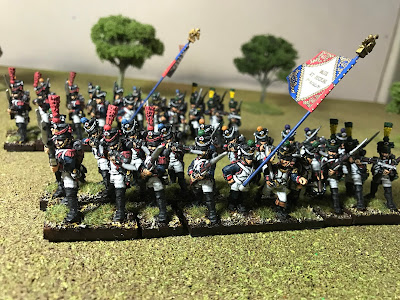 I have also found I have to be a little more careful with the Foundry bayonets, having snapped off a couple when I dropped them, but am enjoying the change and will hopefully manage a couple more regiments over the coming month or so.
Posted by Lawrence H at 01:59 10 comments:

After having completed the Spanish and Portuguese 28mm armies I thought I had better have a go at some French. I have had a pile of Foundry 28mm French I purchased in 2003 so I thought I'd start with them, and the 34th Ligne: 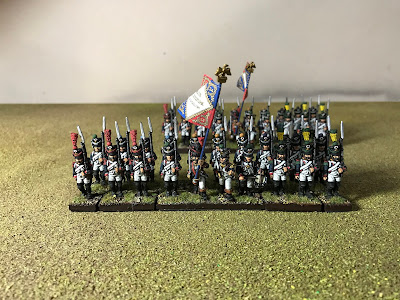 These are lovely figures which is not surprising as they were sculpted by the Perry twins, and the quality is certainly there to see, although they do feel on the smaller side after having painted primarily Front Rank for the past couple of years. I especially like the expression on some of the figures: 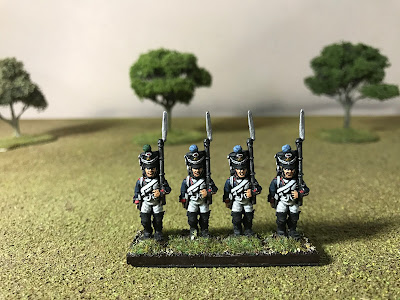 The 34th Ligne had a number of uniform variations, including the colour of the voltiguer epaulettes which had a red crescent instead of the more usual yellow, which was obviously just a matter of the paint used: 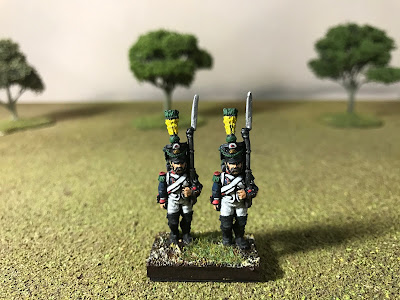 The officer shako however sported a large tricolore rosette instead of the shako plate, but rather than try to hack this around I simply went with the latter: 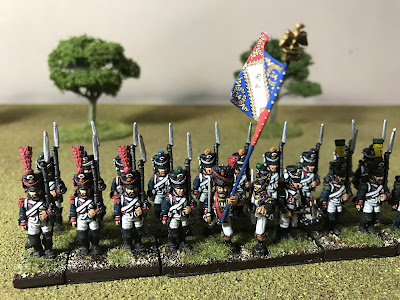 The 34th were engaged throughout most of the Peninsular including Albuera where 2 battalions were heavily engaged against the more than capable Reales Guardias Espanolas, and at Arroyo dos Molinos were three battalions were quite severely mauled by a force under the command of Rowland Hill. In spite of this they managed to hang on to their Eagles, in this case shown with a GMB flag for the 34th, much to Soult's relief: 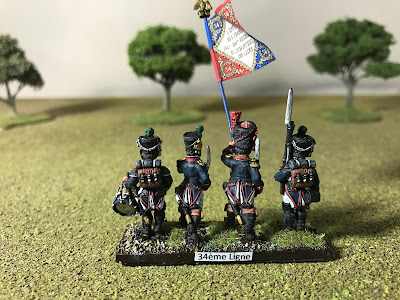 My plan is to work my way through my Foundry pile first, with around two battalions to each regiment, before I move on to some Bardin-uniformed Perry and Calpe French I have waiting. I also hope to take a few detours into some allied troops along the way, so am hopeful there will be enough variety there to maintain my interest levels.
Posted by Lawrence H at 21:45 7 comments: