The last set of units, these nineteen battalions of Spanish line had been awaiting some updated flags and their unit labels for each of the command stand, which I finally managed to complete the weekend before last: 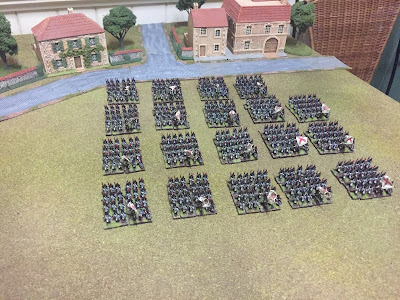 Each battalion consists of twenty-four figures, on a ratio of roughly 1:40. They have just one company of grenadiers however, which is slightly different to my 28mm version of the same army where I painted half the figures of the first battalion of each regiment as grenadiers, but none for any second battalion of the same regiment (where they existed): 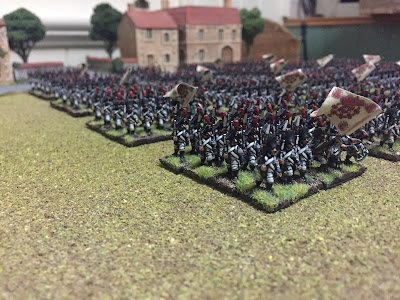 This is again due to the order of battle for the Spanish of the 15mm group I game with, and an argument can be lodged for either case particularly as the Spanish, as with the Austrians and Russians, were often in the habit of removing grenadiers from line units to form converged grenadier battalions, of which I have also completed half a dozen in this particular army and photographed on an earlier post.

For the line battalions I tried to use an assortment of differing facing colours to provide some variety, the only slightly disappointing aspect being that the lapels are largely obscured by the cross-belts on the 15mm Essex figures: 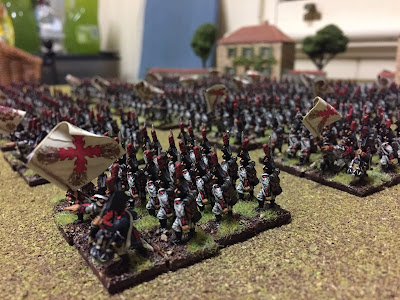 That said, I found the Essex figures quite nice to paint, although doing so many of the same pose did become a little monotonous after a while: 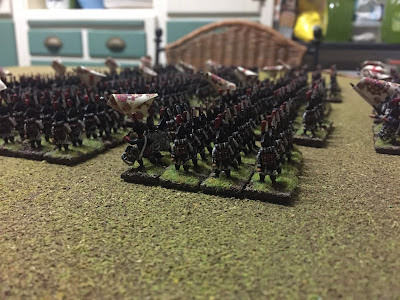 In terms of the flags and given that many of the actual regiments only consisted of only one battalion, I could have provided some of the regiments with both the Coronela and Ordenanza standards, but was ultimately limited by the number of flag bearers in the Essex command packs, and also by our basing convention which allows only three figures to a base for Spanish line. In the end I distributed them between the units on a roughly 50/50 basis, again to give a little more variety.

Now that they are completed, I might try to haul the entire army out for a group photo before they get stored away, then to no doubt be dispatched piecemeal for various games in the future.